[40k] The Return of the Squats

As many may be aware, the Squats are returning at long last to Warhammer 40’000, with a vengeance. Warhammer community have a slew of nice little reads on various new concepts and units and wargear that these Leagues of Votann will sport.

Hilariously, the precious central computers which these Space Dwarfs depend on were not designed for being in operation for twenty thousand years, and so the accumulated memory has slowed down these once-lightning quick artificial intelligences to an agonizing crawl, with many problem queries to the machines requiring centuries of loading before solutions are received.

What do you think? Any favourite new reveals? Yay or nays? Planning to collect these stunties? 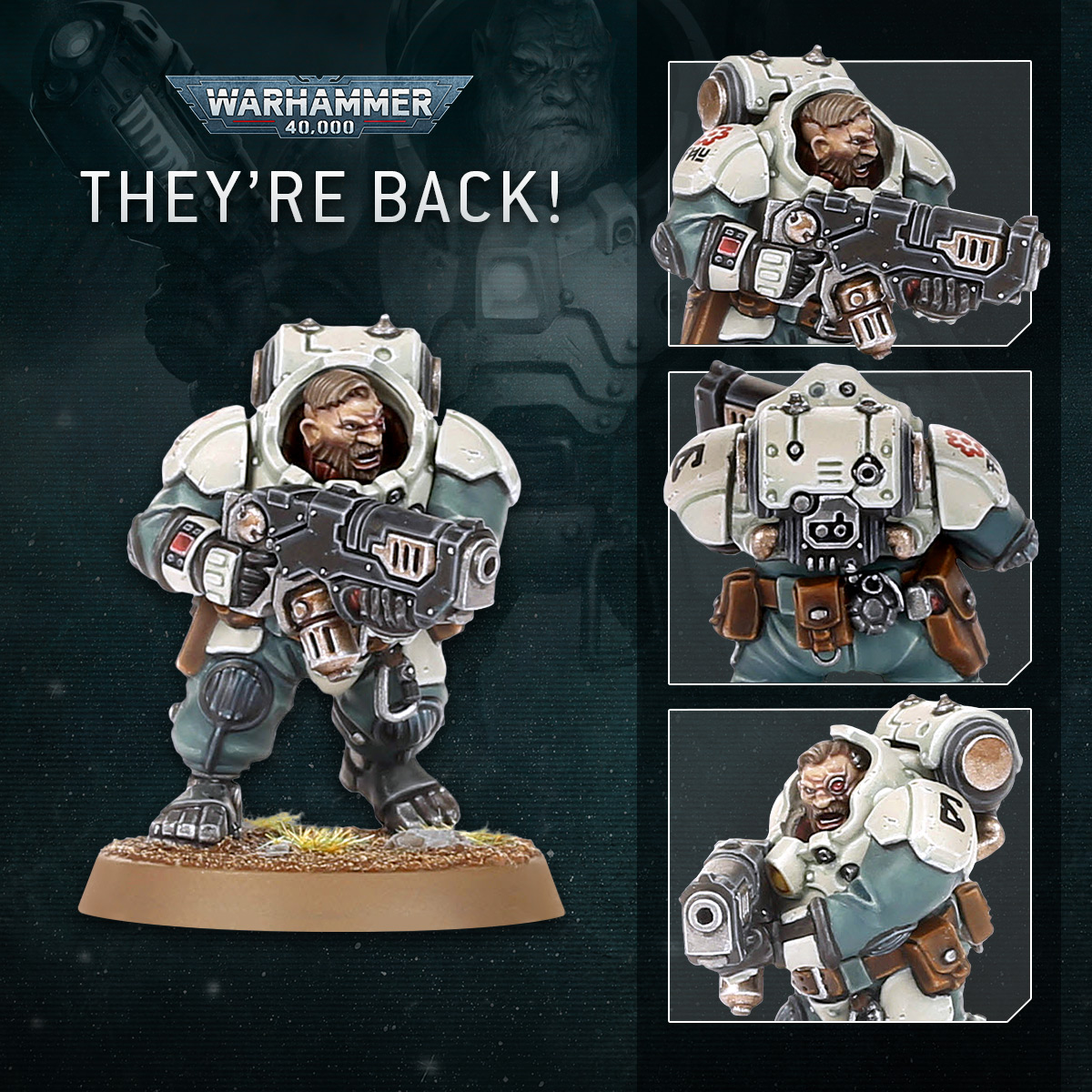 My take: Design choices such as beards and proportions aside, this is the thorough treatment that Squats deserved to originally get.

Of the same kind the Eldar got during Rogue Trader:

We are at last getting fantasy Dwarfs in space, who are much more than just that.

Asteroid mining, clunky AI, the whole shebang. At last the Games Workshop design studio was inspired by a vision for Squats.

Remember that Squats were sidelined during 2nd edition, despite selling reasonably well, because the studio folks had no good ideas for them. Unlike, for instance, Eldar.

They felt that biker Dwarfs in space who hated Orks were too lacklustre, too close to their fantasy counterpart, without a driving vision, and thus they put Squats in fallow.

Which in hindsight was the correct decision, because now the current studio crew has a vision for Squats. As refreshingly loosely based on their fantasy archetype, yet being something far more, as Eldar were to High Elves during the Rogue Trader era. And I say this as a fan of the original Squats; much as I like them, they were also always lacking something essential in their background to tick properly. And yes, I will convert whatever Leagues of Votann models I add to my Squat army to be more Dwarfy, especially with big beards and runes and Viking ornaments. And 80s Rogue Trader Squat stuff. And Ork trophies.

The current GW studio has hands down surprised me delightfully with how good of a vision for 40k worldbuilding they possess: Just look at the Adeptus Mechanicus, Genestealer Cults, new Sisters of Battle units, everything in Necromunda and now Squats. This isn’t just an endless repetitive codex cycle of ever more Space Marine releases. It’s an actual exploration of the galaxy, with plastic kits to boot. And it’s not a shoddy exploration, but a thought-through one.

What a great time to be alive: The GW studio has turned freewheeling creative again, not unlike the Rogue Trader days, and they are expanding the setting true to its spirit, without breaking the overarching themes (with a caveat that the ongoing Primarch return plot may risk to break it; we’ll see). You cannot reasonably expect the Warhammer 40’000 setting to be in such good hands after 35 years of personnel rotation and risk of picking up outside influences for the worse. We’d better count ourselves lucky. 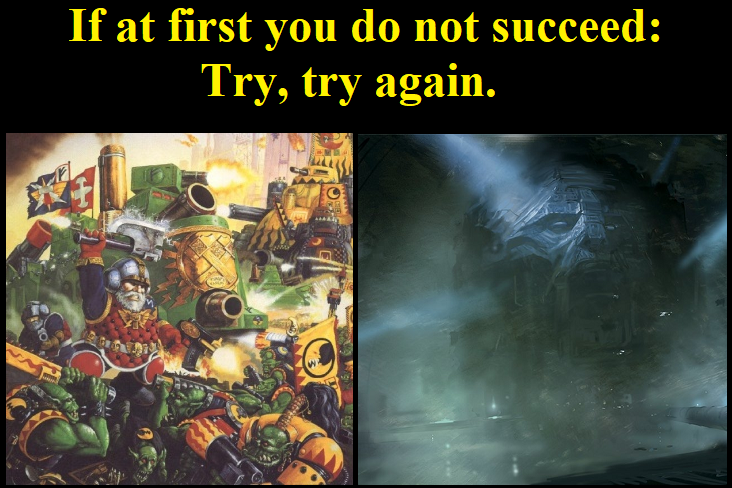 Here’s hoping for a chaos version. Would like to see Hashut in 40k

Yes im loving this release even though i wont buy many models as they will look too big next to the older size. Vehicles are definitely in though as well as the book.
Ill play 40k again for 1st time dince 2nd ed ended.

Hope you start a squat blog admiral on here, will be good viewing im sure.

The background seems to be good and allows for different takes on these a.i robots , troop types etc

Agreed. A nice revamping of the old squats.

According to what little information we have so far, I believe we might even get several versions of squats for all tastes. The leagues of Votann are the basic culture, but we already have necromunda squats annonced, meaning they can be found in the imperium.

And then there are the demiurgs fighting with the Tau. I hope it will be revealed they are squats who travelled too far and mingled with xenos. That would provide a lot of variations.

And that’s without counting the chaos conversions.

Although I must say I still favour the kharadrons for esthetic reasons. I hope more squat minis will change my mind.

@Zoddtheimmortal : Good plans! I look forward to follow your Squat project here. Will you be sharing your original paintjobs as well? Such is always nice to see.

I do have a Squat blog on Chaos Dwarfs Online: Squattish Shooters Ahoy!

After all, my main army is WHFB Karak Norn Dwarfs, my evil army is Chaos Dwarfs, my 40k army is Squats and my Lotr army is Dwarves. I don’t believe in longshanking, or knees for that matter.

@ashur : Excellent point! Fingers crossed more is revealed about the Demiurg, and that we may see some Chaos Squats from GW (we collectors will always see to it otherwise).

Yeah, the Kharadrons are ace Space Dwarf designs. Hard to beat. Nothing I’d ever want for a fantasy setting, but I loved them on first sight for 40k. I might try to get some Kharadrons and new Squats and mix them into my mainly Mantic Forgefather-based army, plus Rogue Trader style Squats converted from plastic Dwarfs. 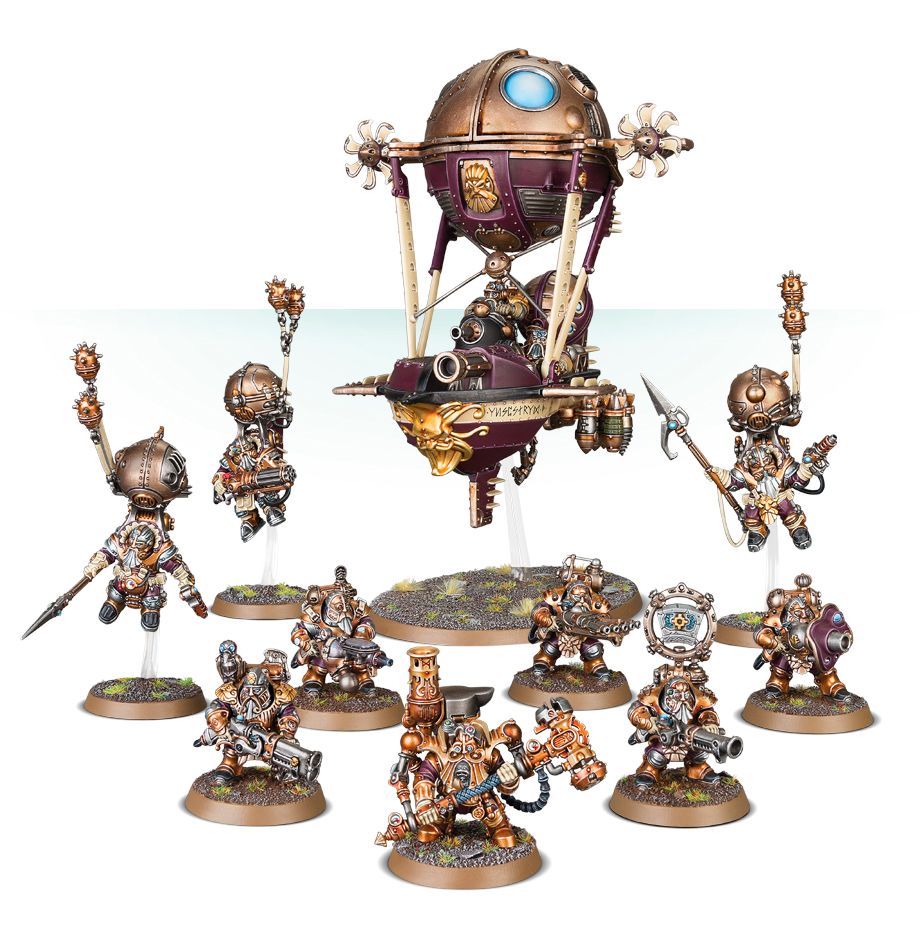 At first, I thought, oh no, it’s Space Marines all over again but I think I’m starting to see the vision you are mentioning. I agree that the old squats had little potential in 3rd ed onwards because old 40K did not take itself as seriously. I personally prefer that as for me the visual style is more important than deep and consistent lore. But given the direction 40K has evolved to, this is a relatively good compromise. The Necromunda squats released in the recent past make me hope that we will see some Rogue Trader aesthetics again, though.

Rogue Trader Squats have good style. Mining helmets with sound dampeners, quilted armour and fun bikers. Aesthetically they were as solid a start as for any faction at the time, and hopefully we will see more of them, as per the Necromunda Squats. It was the background that was lacking when GW took stock of their 40k creations in the 1990s, and realized that something essential was missing, and they had no good ideas at the time. The last hurrah of the original Squat range was in Epic 40’000, complete with land trains and other large warmachines.

Moreover, hobbyist conversions, homebrew 3D-sculpts and additional third party manufacturers may well come cater to different styles of Space Dwarfs, so even if the visual direction of GW does not appeal, a Squat fan will still get an army with rules and bonkers, polished background, regardless of what models and style one sticks to. No need to proxy it anymore. And the GW studio has come up with concepts for hobbyists to further develop, CDO style, if they are so inclined.

Also, the return of the Squats was foretold in the very last TTS video released after the IP debacle last summer. Lo and behold its glory: 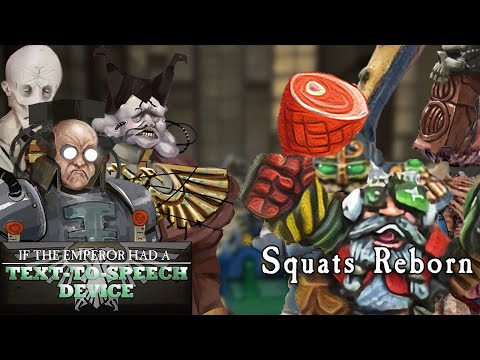 I always loved the old school squats, they had a wonderful Judge Dredd and 2000 A.D. flair to them.
But as @Admiral points out, GW really didn’t seem to know what direction to take them fluff wise.
It’s nice that the newer GW studio crew seems to have recognized that shortcoming (no pun intended).
I’m not particularly impressed with their lack of proper dwarvish haircut styles, but nothing that green stuff can’t take care of.
I have high hopes for them

Gaddam this TTS episode makes me lose it every single time! Sunderer of Slugs is a title I shall seek to aquire for the rest of my life!

I must admit I love those bandana wearing hell’s angels squats of old. Maybe they would fit Necromunda today.