Ok, here comes my attempt to scale the grey mountain.

I have been slowly buying up Mordians from ebay over the past 2 years. They are not particularly sought-after but nobody over here seems to have more than a couple of them / wants to part from them. Funnily enough, the same is true for Praetorians – they rarely reach the prices seen over at your side of the channel. As for the orks, I only have the ones from the starter box plus a metal dreadnought. I would love to add some metal minis but so far my will was stronger (Knightmare miniatures

). Perhaps less so once I have ruined my BATG score.

I am always here to help if you need it…

But BATG is about painting! Our collections deserve the love! I will have some 90s stuff to show in springtime, if I can get through my current targets. Multiple types of stormtroopers, some vintage commissars, etc

the same is true for Praetorians 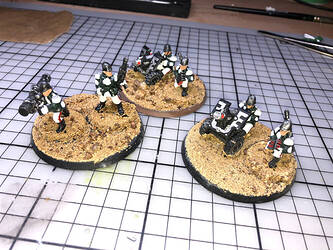 Hmm, to be fair Anzu, those are painted, right? Or do you plan to strip them and repaint?

I’ve finished three gretchin, just before the February deadline. They were basecoated last year – so I will not count them towards my score. 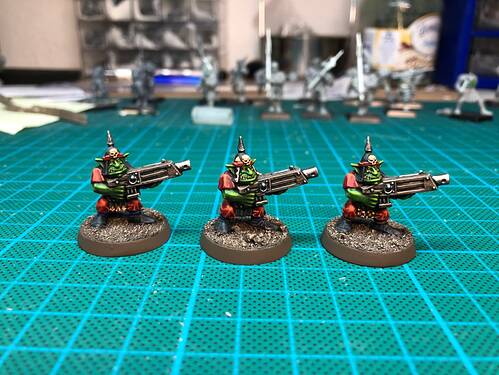 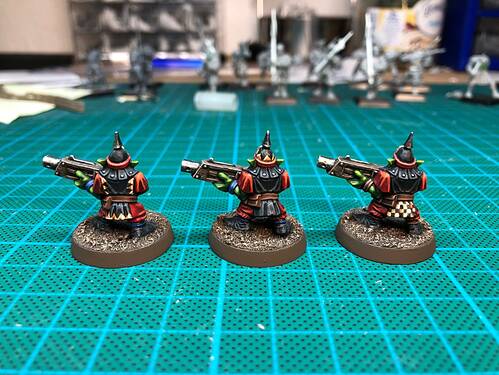 @chitzkoi Technically you are right but they are pretty desolate as they are – that paintjob does not do the proud men of Praetoria justice, so I count them as unpainted.

However, how about drilling out the barrels on every model with a gun in your collection? Just a thought.

I rather enjoy painting these old plastic models – I think they hold up quite well for their age. I actually did drill the barrels in the front but was too lazy to drill out the muzzle brakes. I may touch them up at a later point.

I bought some Warlord era Chinese from Copplestone Castings’ Back of Beyond range (+ 23). Not looking too good for my BATG score… I spend virtually all my hobby time right now with sculpting. 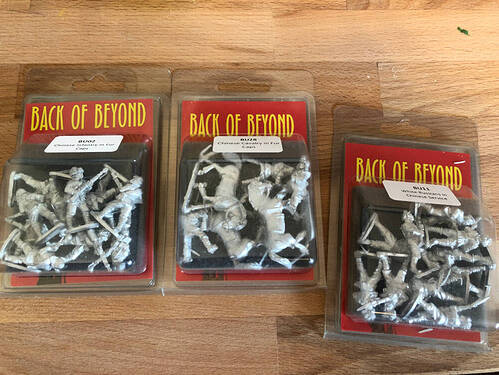 I spend virtually all my hobby time right now with sculpting. 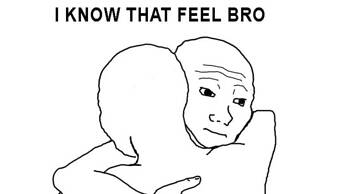 I will also add my own casts once I have decided what lands on the reject pile.

3D prints, an emissary and progress on the Artisan’s contest dwarf After vacation, a family visit and an involuntary temperature-induced hobby break, it’s about time for an update. First of all, an expedition force spearheaded by a particularly vile individual by the name of Yzenor Anvilbrand has arrived on our shores (a while back I might add). I did not manage to document this earlier here, so thank you once again for the lovely miniatures along with the nice & unexpected emissary and letter…

So these are 20s era? You have great taste

@chitzkoi 100% correct. I am happy and a bit surprised that there are miniatures for such niche settings + Marc Copplestone appears to be a former Foundry (GW?) employee. The sculpts are rather simplistic compared to Citadel, so painting them should be quick.

@Oxymandias Thanks. They took way longer then they should have… compared to your recent contrast and streaking grime gobbos.

Haha, fear not… I just received my Punga Kickstarter today!

Nurgle’s rot got us right before Christmas (round 2 for me already). So instead of visiting the family I have now a lot of unexpected (hobby) time.

I honestly don’t care much that my BATG score is so abysmal (while I’m technically not dead last I would definitely deserve it) but I like keeping track of my ‘inventory’ which definitely helped in reducing the number of purchases, so I might even continue.

Earlier this year, certain events got me interested in a rather obscure conflict that took place in the early 1930s when Soviet troops invaded modern-day Xinjiang (or Sinkiang in the spelling at the time) and defeated proxy Chinese Central Government forces. The conflict is so obscure in fact that even the Osprey books on Warlord China and the Chinese Civil War conveniently skip it. Which does not mean that it is not interesting, quite the opposite actually. Now, literature on this topic is not much better than the respective Wikipedia article with the exception of a Western academic monograph published in 1986 (which means that neither Chinese nor Soviet sources have been considered – which sadly, if they exist, remain not readily accessible to this day), so I had to rely heavily on a few first-hand accounts to get a better idea about the conflicting parties.

Miniature-wise I converted a few White Russians by Copplestone Castings (White Russians in Chinese Service (Warlord period) to be precise and yes, I was as surprised as you are that something so specific exists) to resemble the KMT uniform of the early 1930s. Sadly, I found it quite frustrating to prepare these miniatures as the casting quality (or rather mould quality) was not the same what I am used to with fantasy miniatures. Trying to convice myself that I should perhaps wait for Wargames Atlantic WWI British and go from there for future conversions.

Here is a test miniature which can double down as a Soviet ‘volunteer’ or a White Russian provincial soldier. 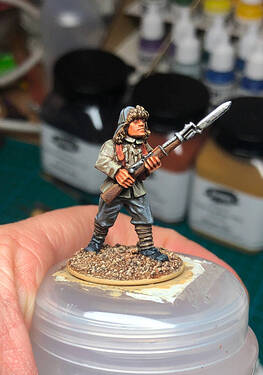 Perhaps I can manage to finish a few more before the year ends.

Ah, and before I forget it, @Admiral (or to be more precise, his friend Johan) sent me ‘a few’ Skaven clan rats a while back for some future Roman Republic-themed conversion in exchange for most of my IG bits. Turned out to be a full regiment of them (thank you!

). And I got the mother and child sculpt from Admiralty Miniatures. [+21] 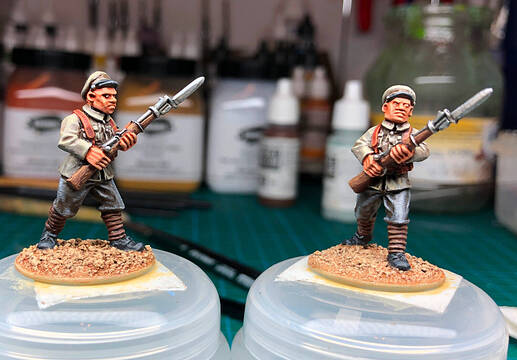 Lovely work on the ‘volunteers’ there! Indeed a war hard to find information about.

This is amazing Anzu because I just put in a massive order to Copplestone for a Chinese Warlord army to use in Bolt Action with @Oxymandias and the Essex gang.

I’ll be making an army intended to run as Axis Chinese, not tightly based on the Manchukuo army (we play more Hollywood than historical) but intended to represent them, using the massive and very cool Chinese army lists which are hidden away in Empires in Flames. They’ll use Japanese tanks and Soviet armoured cars. The Warlord himself will have a Kempeitai bodyguard… to make sure he advances the interests of the Greater East Asia Co-Prosperity Sphere.

I’ll probably go with a mix of Kuomintang bluegrey uniforms for the Copplestone infantry who are moee the professionals.

Poorly equipped peasant levies were popular in the region as well so I’ll be using plenty of them. Good cheap plastic minis for that include: