[Archive] Chaos Dwarf Radio: Episode 4 - We talk about Warriors of Chaos and more! 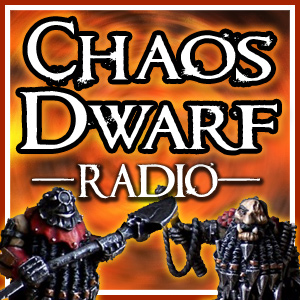 We’re back again! This episode was recorded on January 5th, and I just finished editing it last night. Enjoy!

Anyone who uses iTunes or similar will have already downloaded the cast as it was uploaded last night. If you want to get in on the action you can subscribe to the podcast using the RSS feed (In iTunes - Advanced > Subscribe to Podcast… http://www.chaos-dwarfs.com/podcast/cdc.rss )

Another one down. We hope to try and get more audio content out regularly, but it’s pretty difficult to get 3 people from various parts of the world to find 2 solid hours of uninterrupted recording time. HB’s been having computer troubles, which also didn’t help! Many other small issues got int the way as well. Even finding the time to edit the cast (it’s been more than 2 weeks since we recorded this show!) has been a challenge.

Hopefully it was worth it!

Good man for finally getting it edited and posted

Great we get to hear my monotone voice… Again!

Sweet, I’ve been waiting for this one! Glad to see the podcast hasn’t been forgotten.

Gnah… my download always stops about halfway down the road… 34 Megs is the most I can get before it happens.

This has been worth waiting for. Great job - guys :hat off

Gnah.. my download always stops about halfway down the road... 34 Megs is the most I can get before it happens. :(

hmmm… It would be nice if there would be low-quality version of every episode, I have same problem as Ishkur

Xander - were you ever thought about YouTube CDO channel?

You guys did great !!! you all have very pleasant voices!!!

Eventually got it on iTunes, listening to it as I write :hat off

Um…it suddenly cut off at around 12 min for me, any one have an idea what’s going on?

Try going through iTunes for it. Also what is your connection speed?

Worked just fine for me, thanks for some great inspiration!

Cool. Is there anything you want to suggest for improvements?

A number of issues about our server have now been addressed by the host. I am curious to see if the downloading issue is still a problem. If people continue to have problems, let me know! Thanks.

Also, 404 errors should cease now. If you get those, let me know!

Could anyone send all episodes on some file sharing server? i.e. rapidshare

I’m not a big fan of rapidshare. Hopefully as noted on the podcast the behind the scenes work should rectify this.

Hopefully the corrections made yesterday will make it download properly. I just download the whole show without issue, and played it in the player without issue (Although the player doesn’t display the total run time of the show properly, as our show runs over an hour!).

Post here if you are still having difficulty. Thanks!

Not much improvement now I’m afraid… the download actually stops a lot earlier. I tried three times now, once I could download roughly 4 Megs, then 1 Meg, then 30 Megs. I have cable internet with 200k so the speed should not be an issue.