Voting will close on Sunday, July 8th. No voting for yourself!

Below are the 9 Entries received. Pick which one you like the best, and cast your vote. All votes will be made public, and thus we shall know if people are creating accounts to vote for themselves, etc. It would also be appreciated if you tell us why you voted the way you did.

Great stuff for our second contest! I am really psyched by the entries, and although I myself did not finish one, I think the contest went extremely well. Nemesis Crown should be awesome! Hopefully these Rykarth miniatures will be appreciated at GW! We’ll send in the entries after the poll has closed! 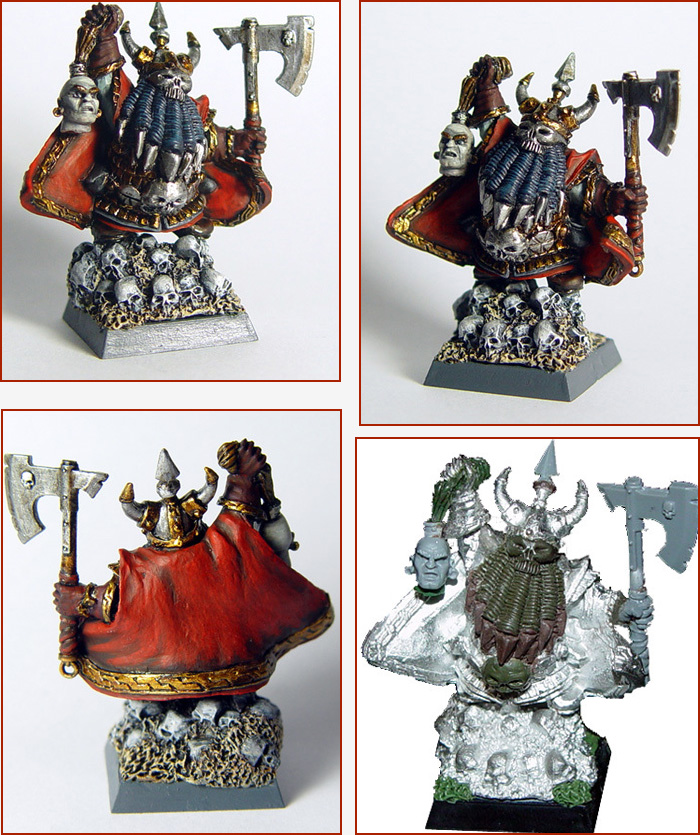 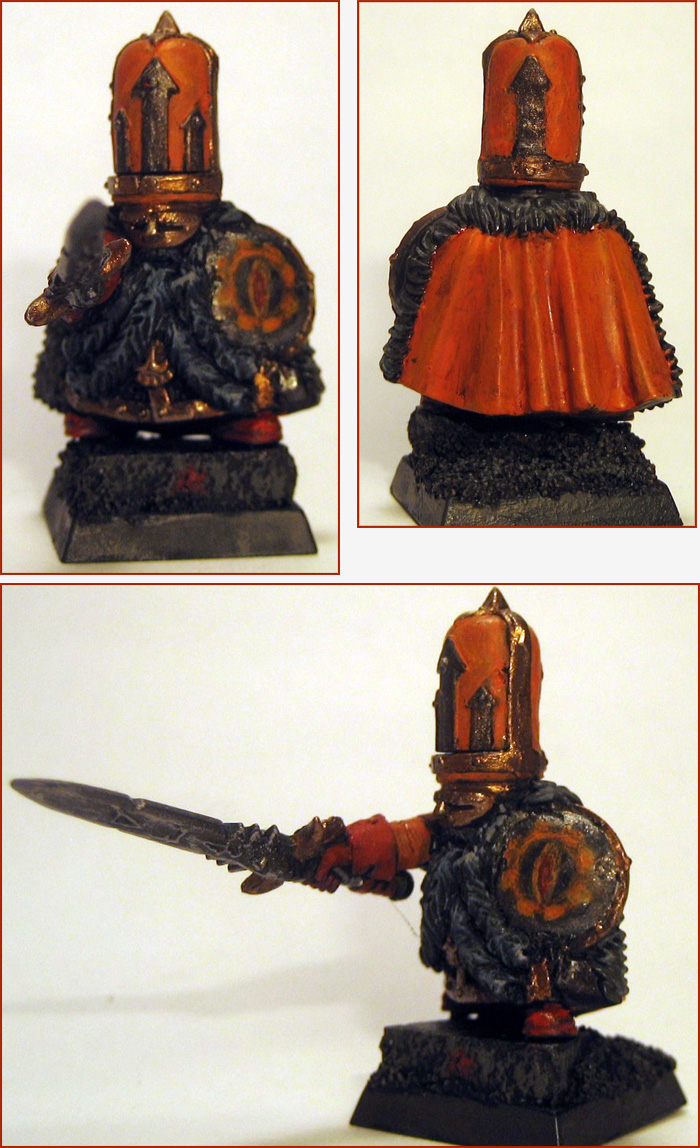 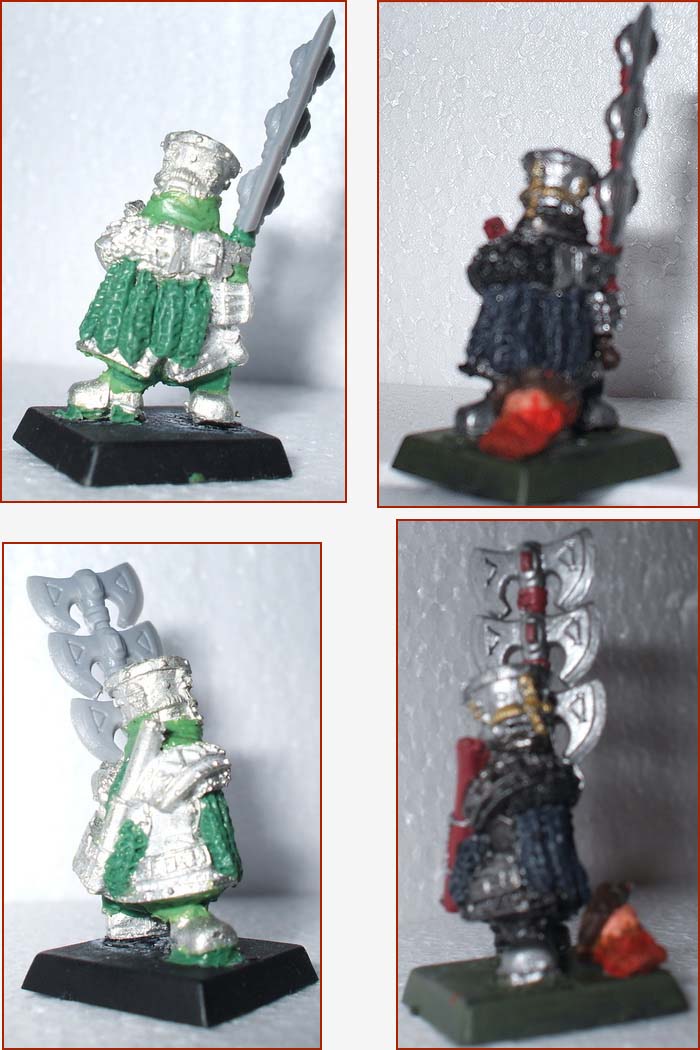 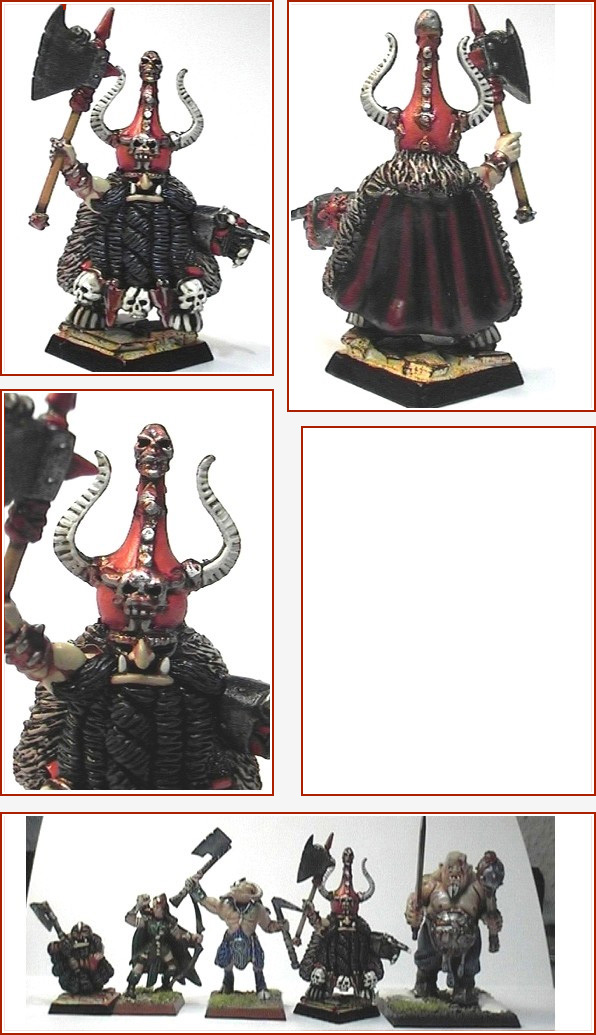 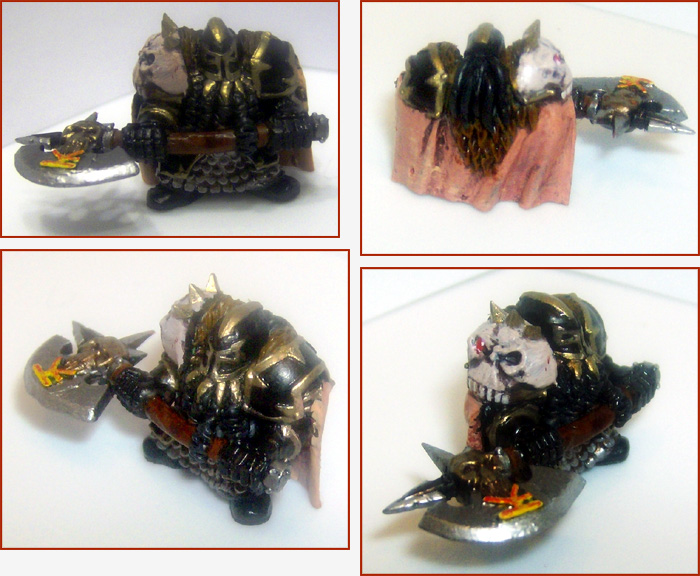 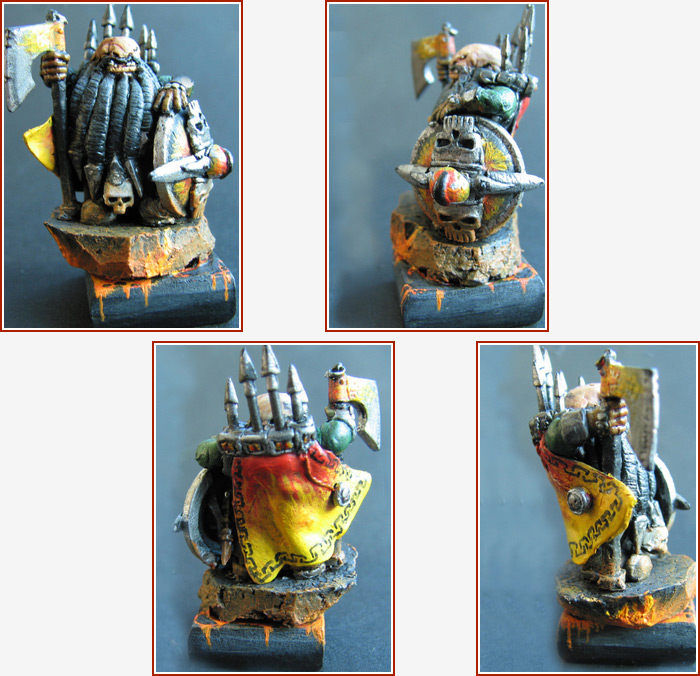 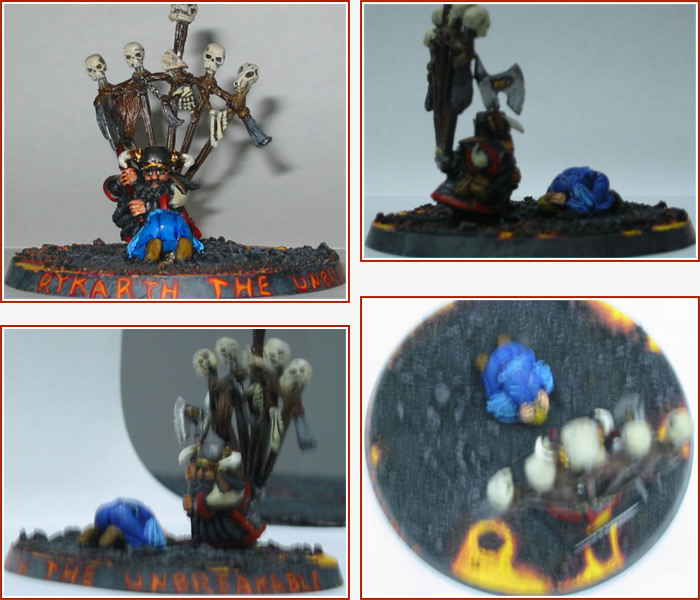 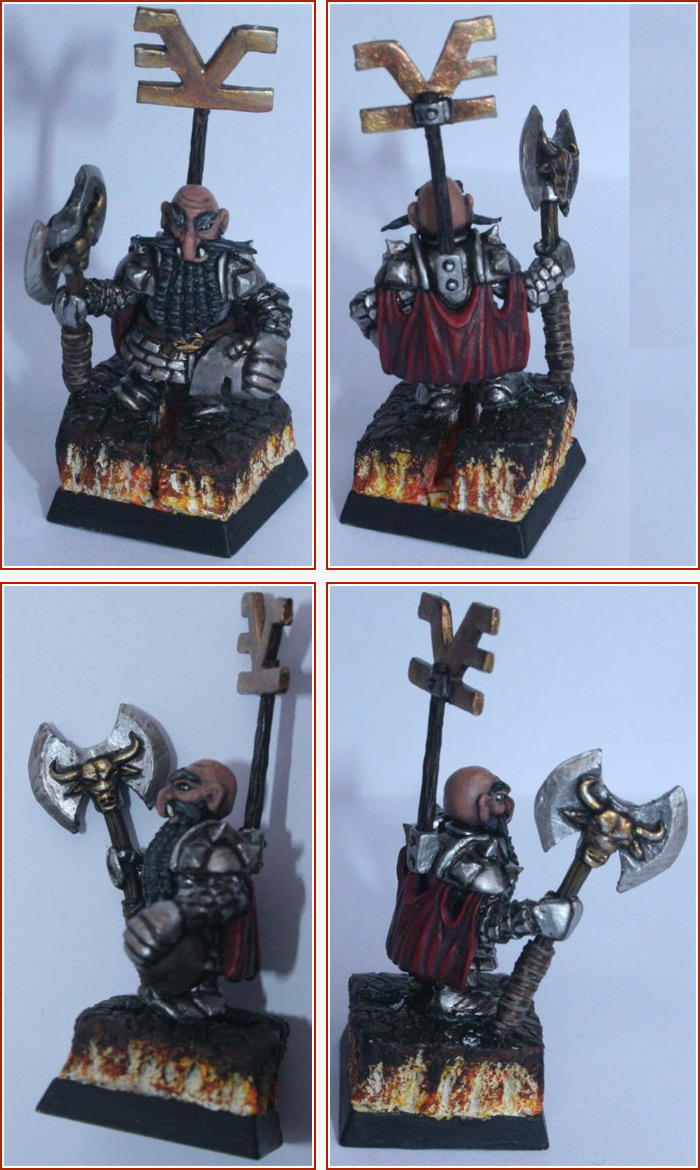 Also, don’t forget to sign up for the Nemesis Crown campaign this week at your regional GW site. Also don’t forget to follow the Hand of Hashut narrative! Which is being written with the help of a few CDO staffers!

Should’ve mentioned, I don’t base my models and characters are lucky to a skull or head or anything on their’s :D. But, thanks for mentioning the originality factor. My painting has never been very good and this was my first use of green stuff ever. Regardless, I’m very proud with it myself

Ok, so I botched this poll. We are locking the poll for now, as the deadline should be the end of today! Whoops!

I will make a new Poll at the end of today. Sorry for all of this! This may actually give me the time I need to finish an entry.

Silly Xander, starting the poll before the deadline was up! The poll’s been closed until tomorrow, and posts stating “I’m voting for X” have been deleted or edited. Feel free to comment on the pictures, which will remain up and added as entries come in, but I’d advise against committing your vote until the poll is open.

And if you have a model, send it in!

to many lovely chaos dwarves, too many demented stunties, how how am i to choose

Wow, nicem models. gunna be hard to choose a favorite

I will be rescaling tonight to match the others.

Refrain from casting votes until the poll is up! Thanks!

May i ask what is the prize?

The prize is Mr Xander emails all entries to GW US.

Don’t look at my old picture! I have done more!

Oh, how come only US? Can’t he e-mail them to GW UK as well?

Whoever wins, I think everyone should do some final touches and take nice clear pics. If its going on the website it needs to be as good a photo as possible.

A member has requested that I let him send in his entry late, which could be 1-2 days from now. I am going to allow this, but only because there is no prize at stake and we want as many Rykarths as possible to send to Games Workshop. Under normal circumstances I would not allow this, so remember to start your entries early in future contests!

@Warplock Monkey, Xander asked for all entries to be on a white background.

EDIT: And by the way, it looks really good on that rocky base.

Awwww nuts… that picture was so much better than the last one:~, does it really matter?

Awwww nuts...... that picture was so much better than the last one:~, does it really matter?

Oh, how come only US? Can't he e-mail them to GW UK as well?

How long will the voting be on hold? The deadline finnished a few days ago…

I was wondering that too. I think it may be because of the delayed entry, but I think it’s acceptable. Whoever’s entry it is, please be quick

The poll is now open. Voting will last for one week (closing on Sunday, July 8th) and then the winner will be determined. All entries will be put on the main site of Chaos Dwarf Online, and sent in to White Dwarf US. The winner will receive a point of reputation. Note that participants may NOT vote for themself. If I catch someone voting for themself, I will discount your vote AND remove one from someone else!

Good luck to our entrants, these all look splendid!

all the entries were great but that one is just… unbelievable

i loved Arashis as well but Angryboys was just to good

Finally! I have ben waiting for this. And I�m glad that a few more had time to come with some contributions before the voting started. All of the entries are really fantastic, I almost feel ashamed of my own mini now =P

Anyways, since there isn�t any discusion thread for the contributions, I guess I will comment all of them here, and give my vote. Note that this is just my personal opinion, so don�t take it too personal. Feel free to comment on my contribution as much as you want as well.

Ok, first is Entry #1, Angryboy2k. I must say that it�s a great conversion! He looks evil, no doubt about that. But he looses some points in my eyes for a few reasons. First is the helmet. Sorry, but in my eyes it�s not a chaos dwarf helm, it looks too much like a common dwarf, or maybe a norse dwarf helmet, but not a chaos dwarf. Second is, as I have told angryboy before, that he still haves too many normal dwarf symbols if you looks closely. I don�t really like the green skintone I think I can see on his arms, looks like roten flesh… It�s maybe a skirt or something, but -I- still don�t like it.
Anyways, it�s still a great mini!

Entry #2 - Hobgobbler: I really like the sword and the symbol of his shield, but besides of that, he looks too good for me. Doesn�t looks like a character that could stare down on Archaon to me… And there is a gap between his head and the drum-hat!

Entry #3 - Hashut’s Blessing: I like the idea, and it�s a good choice of miniature, but the sculpting and the paintjob is not in the same level as the other entries. sorry.

Entry #5 - Kyte: Probably the most evil-looking entry here. It�s incredibly good, and there�s no doubt about that it�s a true hero in the armies of the chaos dwarfs. Great conversion, I really like his axe. Only thing I would comment on is that 1: He�s maybe too tall, with extremely long arms for a dwarf, and 2: the paintjob is not bad, but it could be better.

Entry #6 - Dedwrekka: Not bad, but IMO, it looks too much like a (short) chaos warrior. Not very hero-like either, I could easily see a whole unit of exactly the same mini without getting a weird feeling about it.

Entry #7 - WarplockMonkey: I love the pose of this mini, now we are talking about leadership! Thinking that you made it completely from skratch is even more surprising. But the beard looks a little weird, and as I have told you before I don�t really like his nose. The paintjob, even though not bad either, could also be better.

Entry #8 - The FlyingBeaver: Hmm… Am I stupid enough to comment on an admins work? Of corse I am! It�s a good and well thought idea, but he just doesn�t look too much of a hero. I get more of the feeling that he is an armies BSB (I know his rules, but I sees that more like that his troops respects/fears him so much that his presence causes the same effect as a BSB, rather then wearing one). The pics are also very blurry (even more then mine!)

Entry #9 - grom: One of the best chaos dwarf minis I have ver seen. It�s incredible what you can do from nothing. That axe is one of the sweetest things in existance, and I will probably borrow that idea from you in the future if it�s okay for you. The paintjob is also of the best ones in this competition.
But the miniature is not perfect (at least not in my eyes). First of all, he�s very thin. Dwarfs are normally more… uhm… “big-boned”. Then we also have the fact that he have, besides of one gold symbol, only one color on his whole armour. Yes, it gives a realistic feeling, but at least I get a bored feelign from that. His hand is also a little too big. Last, the hashut symbol, is turned in the wrong direction

So, my vote goes to…

Why? Well, his mini is the one that in my eyes looks the most like a chaos dwarf, as well as a hero of the ones I could vote on. A tough commander that doesn�t fear anything. Just like Rykarth!

Sorry if I bored you with all this long text. Cya!

Edit: Oh, and thank you SoZ, even though you didn�t vote for me I appreciate that you at least mentioned me