Let me introduce you to a new initiative, The Royal Game of Zharr. This is a perpetual campaign for CDO users to take part in, where by submitting the results of their wargames, their character’s inluence in the central circle of Zharr Naggrund may rise to lofty heights or come crashing down in shame and ignomy.

The purpose of this campaign is to enthuse users into playing with their Chaos Dwarf miniatures more often. In the same way that BatG has enthused many of us to paint more, it is my hope that this will get use throwing dice more often!

Warlords and Sorcerers of Zharr Naggrund constantly vie for the favour or their superiors and look for opportunities to outdo their rivals. In the “Royal Game of Zharr” your victories and losses in real life tabletop wargames can change your warlord’s status and standing in the city centre of Zharr Naggrund.
To play, all you need to do is message me, playing the role of Astragoth Ironhand and GM of the campaign, sending him a picture of your chosen warlord and ask to be given control of a small part of the city. From then on, whenever your chaos dwarfs fight, in your wargame of choice, message him with the result. Was it a major or minor victory? A major or minor loss? A draw? Your results will affect your standing in the city. You may gain or lose influence over certain districts if your results please or displease Astragoth Ironhand. In small narratice excerpts, your warlord may be publicly praised or disciplined.
From time to time, Astragoth will decree that a particular enemy or enemies must be sought out and destroyed on the battlefield. In these cases, additional boons may be granted to those who complete these tasks, finding and fighting opponents with these armies.
The system is without rules and is completely narratively driven. I serve as the “game master” and myword is canon regardless of whether or not it is perceived as “fair”. Players in the royal game of Zharr should know that life in The Darklands is many things…but seldom is it fair. 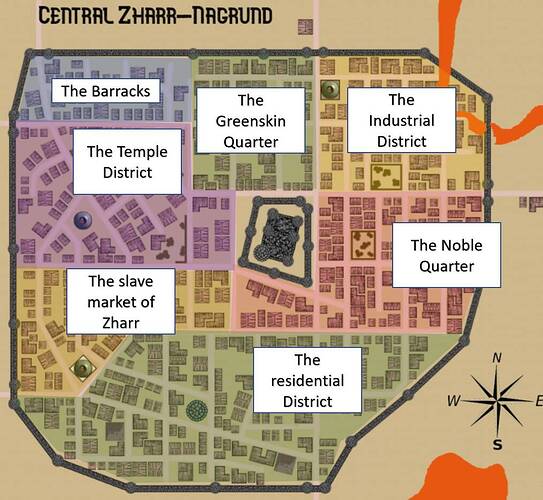 3) The Current Warlords of Zharr Naggrund.
(Place holder for images of the generals taking part)

4) Live Map of Zharr Naggrund displaying each general’s “sphere of influence” over parts of the city centre.

The link below is the “live map”. This is the map that will be linked regularly and where players can compare their “sphere of influence” with one another.

** REGISTER YOUR INTEREST BELOW **

I love this idea. Would matches on TTS count?

Great idea! Azrubal the Ambitious shall participate. Time to take a nice picture of him!

@KhamdrimSkyMaster if thats your main way of getting tabletop gaming in, I’d hate to exclude you because of it. So got for it

Excellent @Antenor ! I look forward to it

I don’t have anyone near me that would play fantasy, so I’m stuck with good ole TTS. Hell, I’d even be down to play you or Chitz (or anyone who’d be willing to deal with my lack of knowledge).

I’ve never used TTS but i’ll try anything once!

I will absolutely be joining!

Well in that case…. Khamdrin SkyMaster’s legions take to the skies for glory!!

Ill join! And ill have to start spamming my gaming group for battles apparently!

But you are present for all my games of warhammer, how will I be able to cheat

even though i have yet to play a game, nor do i have the means to do so, i will be following this for the story’s sake! I may also lie about any and all wins I have.

Oh shit, does that work? You gotta enlight me with it as I never tried playing WHFB on TTS!
I knew there was a possibility but never explored it

I love this idea very much!
Will try to join, but I fear I don’t get enough games in (and I usually try to balance my games a little between my armies).

@Jasko i get this but I think you should definitely get involved. Don’t forget that your goblins victories and losses can be attributed to your general as well

Let’s say one week before we kick off.
If you send me a picture of the miniature that represents your warlord, the name of their faction and a little about them - Astrogoth will gift them a small part of the city.

After I’ve got at least 5 players ready , I reckon, I’ll start the campaign by setting up an “@“ group with a narrative opener and the results can begin flooding in.

Could also apply to Ogre Kingdoms?! I mean that might open up a whole other side of it.
I would say that “third party” games should not have the same impact on the story as games with Chaos Dwarfs though, right? Like, a major win with my general gives my a certain outcome in the Royal Game, but if I only used some allied/enslaved Goblins or Ogres or so, it’s not quite as impactful for my guy. Or would that make it too tedious? And on the other hand, using some enslaved Goblin tribe is probably accepted (and almost necessary) in CD society…