They have aged SO WELL. I used a box of Gluttons to make Ogryns for my guard back in the '00s and I was working with Mournfangs to make my Bull Centaurs and I just thought “These kits are such a joy to work with. I should put together a small collection before GW updates them into overcomplicated monopose kits with too much detail that somehow have no character.”

So awesome, must resist!

Tonight I primed some Gloomspite Gitz in the hope of getting them painted (and so, hit a negative score) by the halfway mark: 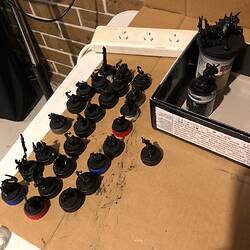 I’m hoping to get the Shootaz all painted so as to hit -5, but either way I’ll be doing some group photos to celebrate the midway point tomorrow!

No changes to scores, so won’t update them this time.

UPDATE: I did not get there… 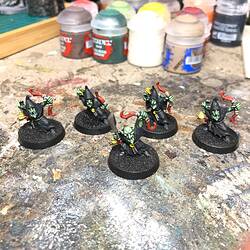 I got 5 shootaz done (sans bases, so they don’t count), and the other 20 got basecoated. 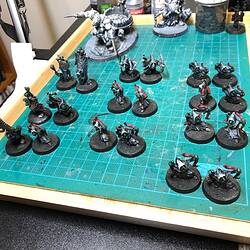 So, +20 at the halfway mark. Sneaking up on that break-even point, though. Soon, negatives, soon…

I just have to resist buying more models for a bit longer.

Well, in the interests of getting more stuff painted I have postponed the halfway report for a bit. 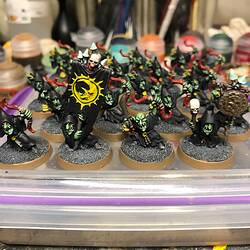 I still have 3 Netters and a couple of spare archers left to go before this unit is finished, but that brings me to NET ZERO! We’re halfway there, and we’re back where we started!

Snuck in a quick light box session before bed: 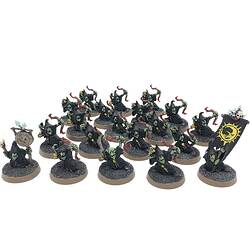 But, uh… I ordered some more Ogors while shopping for the new Contrast paints. I can’t rest yet. The hope is now to stay in negatives for the rest of the year.

We’ll see how that goes!

Scores with 20 one-effort models done and a Shame Golf bonus point for getting a unit of 5+ models done: 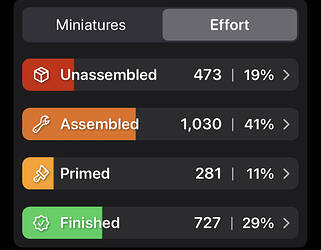 (Also this brings me over 500 painted models in my collection - pretty happy with that!)

The Horus Heresy release has given me an itch. I keep looking at Age of Darkness box splits and thinking “a couple of squads won’t hurt”. 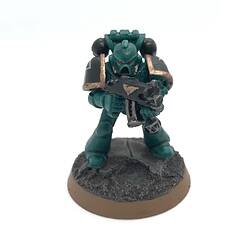 This guy came from my bitz box. He’s one of the first models I ever bought, back in ‘97. I was vaguely saving him for a comparison exercise, shoot him side by side with one of those first models I painted with Testor’s enamels. But that first model was brown, and I am… not really keen on that. 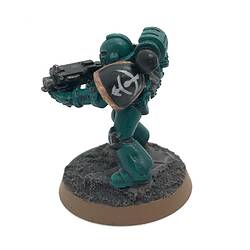 I haven’t painted a loyalist space marine in something like fifteen, twenty years. And yet here I am, scritchy scratchy. 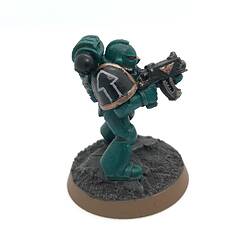 Here’s hoping the itch is taken care of until I can get my BATG score a bit lower (ignoring that I’ve already painted more models in six months than I did all of last year). 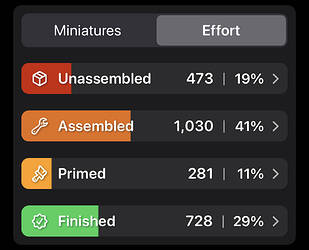 What a haul! Nice work getting in the negative numbers!

I finished off the Netters for the shootaz unit from the other day, so I figured I’d take a proper lightbox shot of the whole unit together: 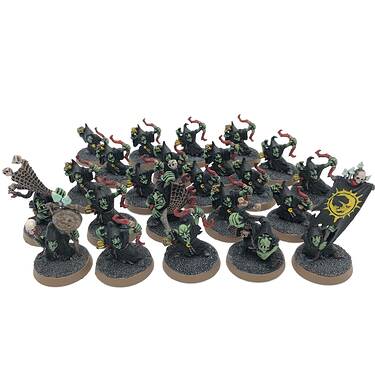 I put together two more Grots from the old multi-part kit but I’m not sure I actually want to paint them. I’d like to make some room on the painting desk for Ogors or maybe some more guardsmen, so I’m going to put those last two models aside for now. I’d only need them if I decided to expand this unit to 20 anyway…

That means I only have ten spider riders and the hut terrain piece if I want to finish all the Night Goblins from Battle for Skull Pass! I don’t think I want to use the spider riders, but being able to put up before and after pictures is pretty tempting!

I’m very conscious of the fact that I have eight models in the mail right now, so if I want to stay in the negatives when they arrive I’ll have to find a few more models to paint really quickly. 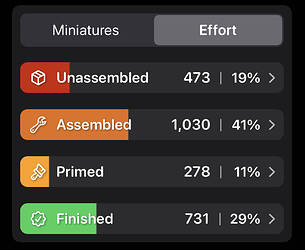 I had literally just finished the last update when the doorbell rang, and a courier got me to sign for a suspiciously box-shaped box that just so happened to include 4 Leadbelchers and 4 Ironguts: 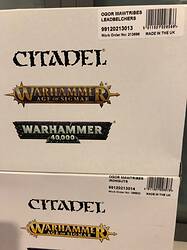 I wanted to preorder some new contrasts & shades, they’d been out of stock for ages, etc etc etc.

So, uh… back to positives, I guess!

Fortunately I’ve got the Ogor Slaughtermaster almost done this evening, and five more Nighthaunt Chainrasps have stepped up to be some easy wins.

I should be back below zero “soon”. 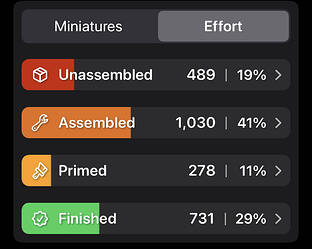 It’s okay, nobody saw that!

I finished the Ogor Slaughtermaster up and got him looking mostly not like a 1900s racist caricature, which is something of an achievement. It is VERY hard not to make him look like a Golliwog. 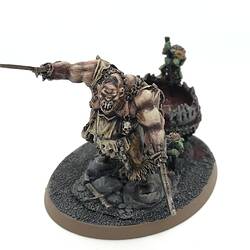 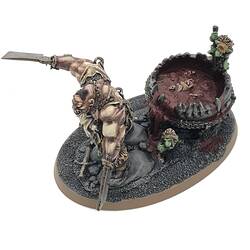 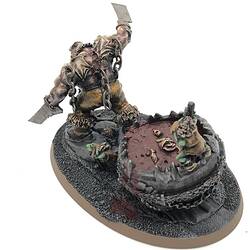 I got the model secondhand and missing the chains he uses to haul the stewpot around, so I did some stuff with some jewellery chain as if he’s snapped free and is off to go murderise things. I also had to replace his right hand hook because it kept snapping off.

I actually got him mostly done yesterday evening but I figured three updates in one day was too much.

In between work fiddling, I speed-painted the last of my Nighthaunt Chainrasps, probably taking only an hour altogether. 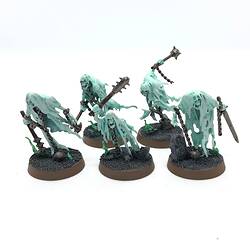 They were a bit nasty, with some serious texture in places from a mediocre spray can undercoat. I cut out as many steps as I could, and now that I’ve got a big pot of Seraphim Sepia I can cut out a lot of messing around with the metals.

That brings me back into negative score territory. I’ve now bashed out most of the models I’d been planning to paint, so I’ll have to fossick through the collection a bit to figure out what’s next. A lot of what I’ve been doing has cleared out my undercoated pile, so there will probably be a lot of airbrushing in my near future!

Here’s where the scores sit with the Slaughtermaster counting for 5 effort: 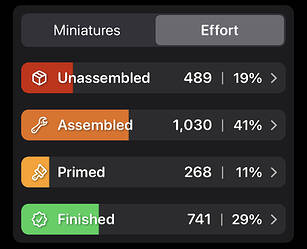 Having done an inventory of what I’ve got primed and ready for painting, I haven’t got a whole lot of stuff that I want to put paint on.

So, I spent my hobby time this weekend building and basing. 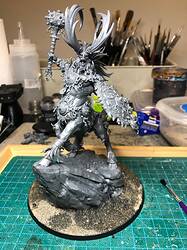 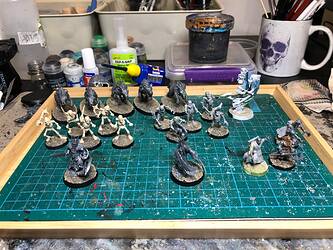 And twenty more guardsmen getting some attention - 10 Ventilators and 10 normal guard: 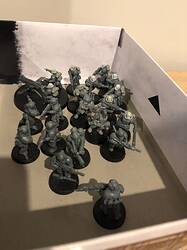 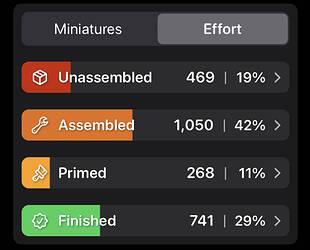 No movement on the score front.

In a bit more running on the spot, I built my Marshcrawla Sloggoth this evening: 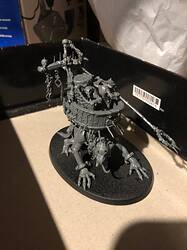 And mid-year thought bubble, since it doesn’t look like I’m going to get time for a big halfway-mark photoshoot:

Something I’ve noticed while working through my backlog this year - and I think part of the inspiration-purchase-new project cycle - is that I often catch myself thinking of parts of my Grey Mountain as static in their current state, like I tend to think “I have a Sloggoth new on sprue” rather than “I have a Sloggoth and it is going to be painted.”

I think what’s really helping (other than momentum) is being able to look at Figure Case or this blog and see the models in my collection as line items of potential, rather than as whole thing in and of themselves. It feels a bit metaphysical, I guess, but it’s true.

It’s proving much easier to conceptualise models as “temporarily like this” if I can imagine them finished. The Cities of Sigmar models I was so excited about earlier in the year never really got off the ground because I haven’t decided on a paint scheme. I just can’t imagine them finished. It’s the same for my Troggoth Hag. I wanted the models, but don’t have a way to envisage them all the way to the end, so they get stuck.

Not so for my Imperial Guard or Ogors. The projects where I know the scheme already through long practice or I have a specific plan in mind just sort of rolls along. That being said, the Guard infantry is going easily but I haven’t picked up a tank yet this year - because I never could figure out a good way to paint them.

BATG has been a great education in motivation, so far. I hope to learn some more over the next six months.

I’ve painted up a second Guardian of Souls for my Nighthaunt. This is the 2018 limited edition variant, that I lucked into picking up with a bigger lot. 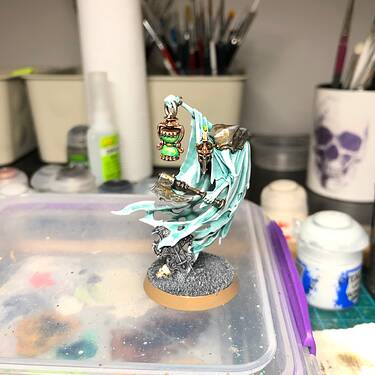 It’s a real pleasure to paint Mengel-style Nighthaunt, all Nihilakh Oxide and then weapons and armour. It’s just so easy to pick up momentum and not get stuck anywhere. 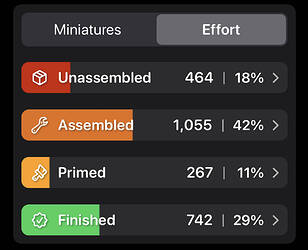 Kragnos is such a cool model, its on my to do list as well!

Sadly, COVID hit me hard and my Golden Hat entry is off the cards, but I recovered enough to put brush to model and finish off my Ogor Tyrant: 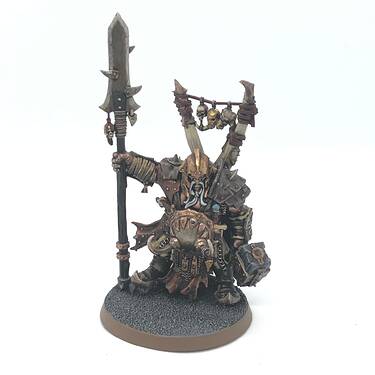 With that, my initial Ogor force is all painted! 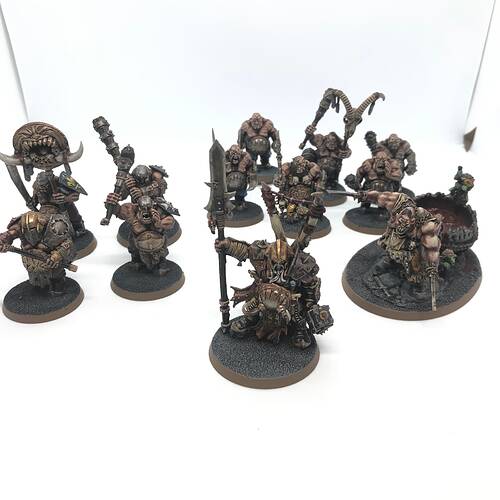 I have eight more Ogors on sprue still, but I’m really enjoying painting the little carnivores so I’m sure they’ll get done before end of year.

Meanwhile, it turns out that the Horus Heresy itch refused to stop itching, and I found someone on Facebook who I could buy some mkVI marines cheap, picking up ten.

Annoyingly, this takes me back over 0 net score, so I’ll have to hunt up some easy wins. 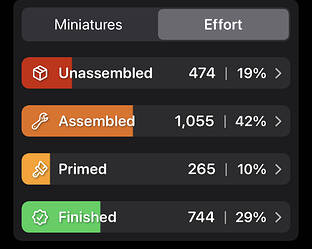 100%. it’d be you with like, big sweat drops flying from your head, running in an exagerrated way after a bunch of minis, paintpots and paintbrushes that are going in all different directions

man… summer time has put me so far behind on all these blogs! awsome paint jobs @EvilFuzzyDoom !

So, I have two conundrums.

Conundrum 1:
I have bought 20 Skitarii, but I only want them for the arms (to kitbash with Flagellants for IG conscripts/Freeguild handgunners).

I will be actively trying to get rid of the Vanguard halves of the sprues.

Conundrum 2:
Having taken a good, close look at the Heroquest models, I really don’t like the plastic they’re made from. I don’t think it’ll take paint well, and it’s flexible in a way that I think the paint will crack and pee if I paint them.

Should I remove them from the count?

I have bought 20 Skitarii, but I only want them for the arms

Definitely a grey area again with intent being key. I would personally only add a BATG positive when the main portion of the miniature is acquired, which in this case sounds like the flagellants. Certainly, if the flagellants are already in your pile then picking up bits here or there to get them finished should NOT be penalized. I see this situation in a similar light as someone printing some spare pieces to finish a conversion. If you don’t have the flagellants in your collection yet then I’d wait until you get those to add it formally to BATG tally. Yes, this is loopholey but ultimately this is a personal accountability gig anyway. If you handle the situation the same every time I see no issues.

Let’s say someday down the road, you haven’t sold all of the vanguard. You decide to build and paint one. For me that’s a net zero transaction, you’ve materialized a miniature from a pile of bits and then painted it.

I don’t think it’ll take paint well, and it’s flexible in a way that I think the paint will crack and pee if I paint them.

Should I remove them from the count?

I think removing them is also fair play. Sounds like intent is to not paint these. So this is more of a board game purchase than a hit to the miniatures collection at this point. I would equate it to me buying a game of Risk, technically with miniatures but not ones I’d paint.