I’ve been hobbying for almost 25 years, and I’ve got a big collection of minis - but three fifths of them don’t have a lick of paint on them.

When my partner and I moved in together a few years ago, we both spent a bunch of time complaining about my pile of shame, how I never used most of the models, and how I should probably either get some work done on them or let them go.

During 2021, I’ve been posting my built & painted models on Instagram, posting my Chaos Dwarfs here since I started on them, and using a fantastic iPhone app called “Figure Case” by Warganizer (only available through the Apple store, sorry Android users!) to track my entire collection. I’ve gotten a fair few models built & painted, maybe the most since I was actively playing Warmachine/Hordes back in the early 2010s. So, clearly accountability works for me as a motivator!

You can look forward to seeing Age of Sigmar for sure, and possibly some 40k, Warmachine and Turnip28 as well, if the whim takes me.

I’m looking forward to battling against the grey in 2022.

I will be tracking my collection in three ways:

Per the official Battle Against the Grey thread, one model added to collection is +1, one model painted is -1. Low scores are good.

This “game” borrowed from the art world by Dana Howl, only counts models you’ve actually bought (gifts don’t count) features bonuses for larger groups of models and penalties for impulse-buying new releases and you get points for giving away or selling stuff, too. I like this score because it incentivises getting rid of stuff that I don’t actually want anymore. Again, low scores are good.

I’ve been using the “Figure Case” app by Warganizer since late 2020. It’s an iPhone-only (sorry, Android users!) app that has a customisable workflow for tracking models’ status in detail, and allows you to track “effort” to accommodate larger or more-complex models.

I’ll be using the “effort” score rather than the pure model count, because big models and fiddly conversions take longer. 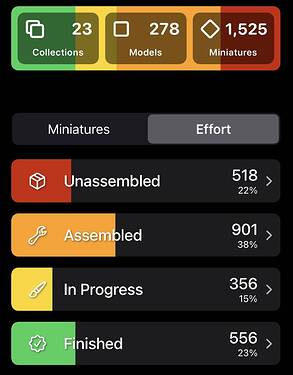 Something funny is going on with the Effort score in Figure case, I keep gaining & losing points that don’t quite make sense. I’m probably fiddling with things late at night 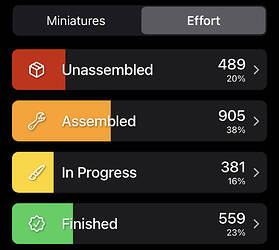 The Grey in Question

I’ve added my collections here, and will include pictures & details if I do any work on them throughout the year.

"Modern" Chaos Duardin
Inspired by the “Battle for Skull Pass” (BFSP) conversions that have been swirling around for ages, I wanted to make “Modern” Chaos Dwarf kitbashes for Age of Sigmar, focussing on keeping the conversions simple and using models that are easily available without dipping into out-of-production models too far (the BFSP Warriors themselves had to be in there, though!).

I’ve been logging them on the forum here and I’ll keep doing so! They’ll be cross-posted here but I’ll keep the detailed commentary to that thread. 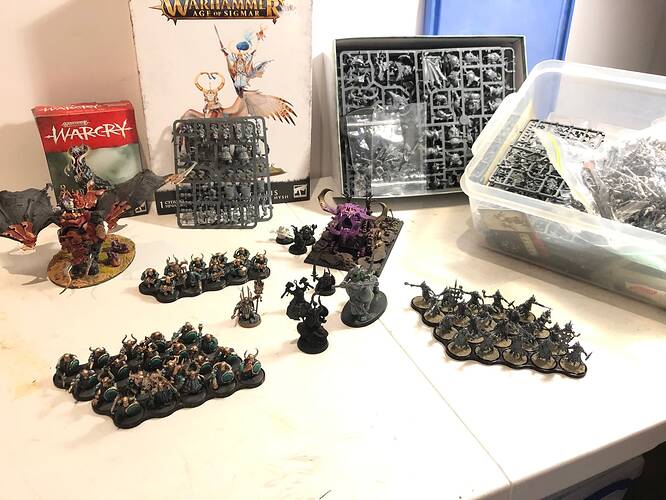 Cities of Sigmar
My most recent endeavour, a Cities of Sigmar army centred around converted Necromunda Cawdor models and using a “dirty, Devoted and poor” theme. 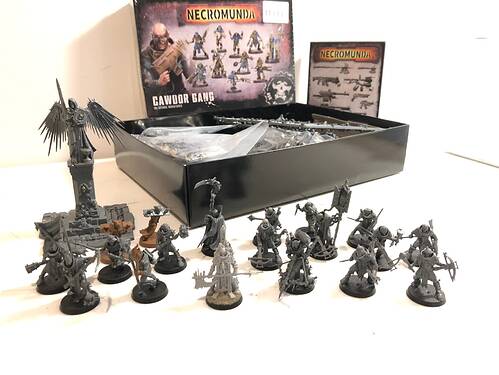 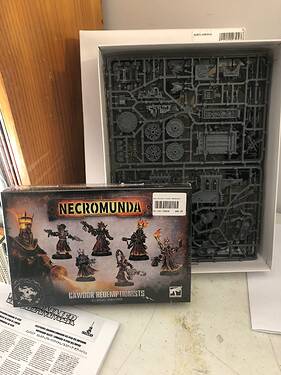 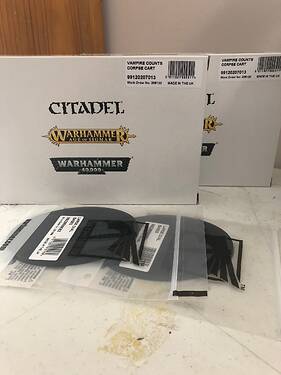 Gloomspite Gitz
A big bunch of Troggoths & Moonclan Grots, that I started when Battle For Skull Pass came out, and that I actually want to play with. 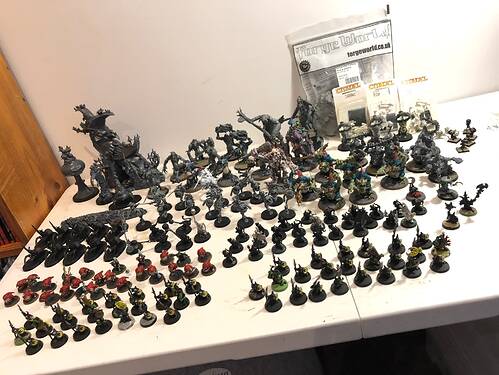 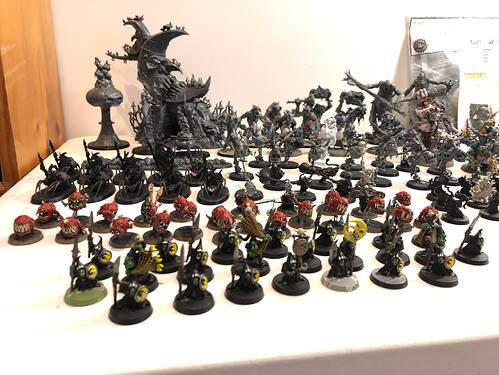 I picked these up as a “take a break” army to paint between Troggoths, which got a bit out of hand. Ironically they are my most-complete collection: 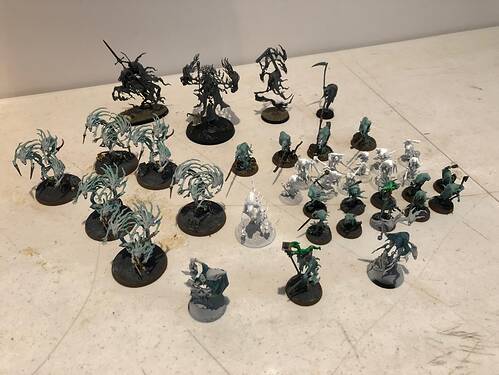 AKA some random heroes and bad guys that I just want to paint for fun or don’t want to commit to a full army.

AoS Terrain
I’ve put together a whole bunch of scenery in the hope of actually playing some games once pandemic conditions allow. I haven’t decided on basing options at the outset, so these might end up being fewer completed pieces in the end.

Astra Militarum/Imperial Guard
Oh so much of them

40k Terrain
In addition to my AoS and generic terrain, I’ve got some 40k-specific stuff:

Hordes Trollbloods
I’m mostly done with these, but I might want to finish them one day for old times’ sake (I love the models).

Warmachine Cryx
I barely started these before my local group collapsed, so I’ll probably get rid of these.

The Lightbox of Glory

Gallery of models completed during 2022

First model built for 2022 is the Lammasu! [image] Chaos Dwarf’d Teclis! Checlis? [image] I swapped Celennar’s head for one from the Warcry Mind Sphiranx (still needs some sculpting around the neck). The Chaos Dwarf Sorcerer isn’t finished, but he’s based off a Cogsmith with a head from the new Chaos Knight unit leader (from the Start Collecting box). I need to sculpt a beard for him, add some kind of back banner, and give him a more suitable weapon. [image] I was originally going to pu…

This thing doesn’t move the BATG or Shame Golf scores, but counts for 10 Effort in Figure Case: 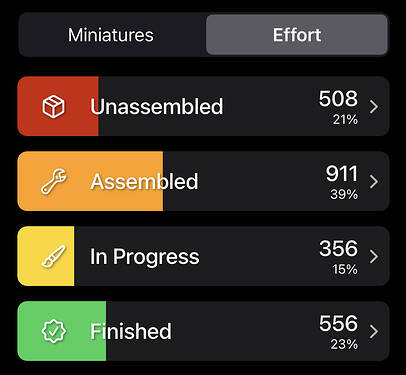 Happily, it’s something painted, not something bought

The “Armator” Chaos Dwarf from the Iron Golems Warcry warband (who I’ve picked up as a sort of all-purpose hero model for my collection); 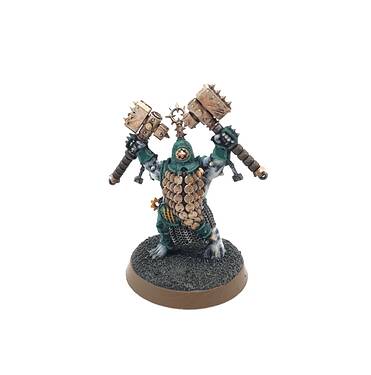 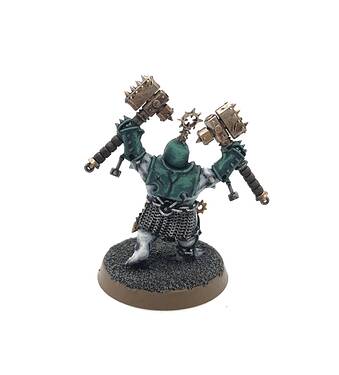 The first blow against the grey mountain has been struck! And before my first mail order boxes started arriving, too.

Figure case update (apparently something moved in the “Unassembled” and “In Progress” columns over the last week but I have no idea what it was):

And ONE DAY LATER my first new minis for 2022 arrived in the post!

A Celestial Hurricanum kit and box of Cawdor Redemptionists for my nascent “dirty and poor” Cities of Sigmar collection.

They’ll be heavily kitbashed with each other but for now they count as 7 new models. Good thing I painted the Dwarf yesterday!

The Celestial Hurricanum counts for 10 Effort in Figure Case, so I’m back up to where I started (including the mystery points I picked up somewhere between the 3rd & 9th of January): 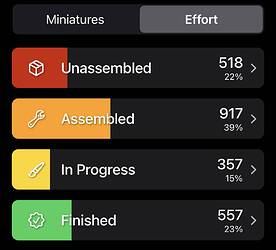 2 Corpse Carts arrived from GW direct for my Cities of Sigmar, I’m going to convert them into Scourgerunner Chariots with Cawdor Crossbowmen for crew:

I’m counting them as 5 “effort” each in Figure case, and they’re going to eat up a lot of parts that I’m currently counting as “unassembled” - so getting them built and painted will make a nice dint in my detailed tally (if not my official score). Until then, though… 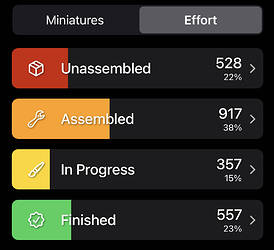 LATER: I also “built” (removed from sprue) some Octarius terrain, and realised that I hadn’t entered the rest of the terrain into Figure Case correctly: 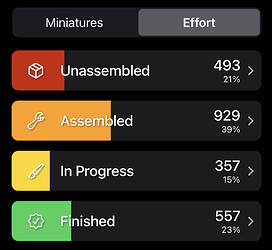 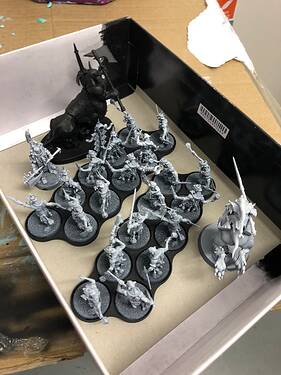 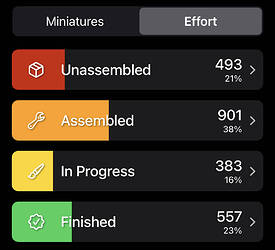 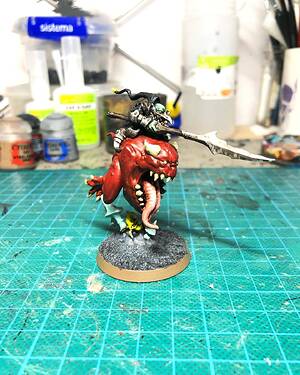 I’m happy to see it done when it’s been undercoated pure white for ages and just needed a zenithal prime and some contrast paint. 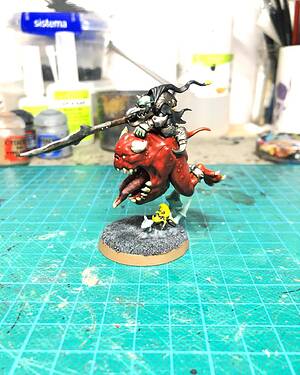 No lightbox today, I’ve tidied up the bench where I usually take photos. He’ll be part of a Gobbo family photo at some point.

I also put together the Mind Sphiranx that donated its spare head to Checlis, and did some work on the Cawdor “Greatswords” that only moved the unassembled → assembled needle a little bit:

But I’m very glad to see that “unassembled” number drop below 500!