A joy to behold.

I wish I could do that

Cheers guys and thanks @Hashoooot ! Long time no see

With 3.0 out now and looking like loads of fun as well as the OnePageRules game I’m also writing up a List for AoS with the Cities of Sigmar book (thanks to those that recommended it, it’s been game changer!)
I’m really enjoying finding different ways to incorporate the Chaos Dwarf minis, though it’s a little tricky to get the correct base sizes, and I’ve managed to write up to. 2000pt list without having to buy anything new…a huge victory for the Battle Against the Grey

So after a couple of different interpretations this is where I’m at right right now below, with further changes coming in the future I’m sure.

With Cities of Sigmar you can choose to have you army from different Cities that give you different buffs and play styles. It’s a bit in the nose but I’ve gone for City of Hallowheart based in Aqshy and has very Chaos Dwarf sounds traits and Artefacts.
I’m by no means a rules guy so any help advice is welcome though as always I play for fun rather than competitive or tournaments 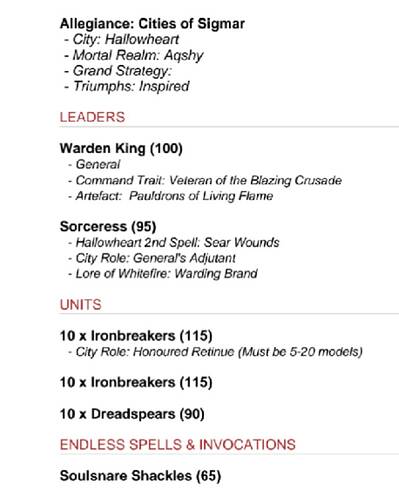 Veteran of the Blazing Crusade gives immune to Battle shock for 18" and Pauldrons of living flame five D3 mortals in 3" at the end of the combat phase. Very Chaos Dwarfy as are the spells Sear wounds to heal D6 and Warding Brand that when cast on a unit and wounds done to them on a 4+ deal a mortal wound back 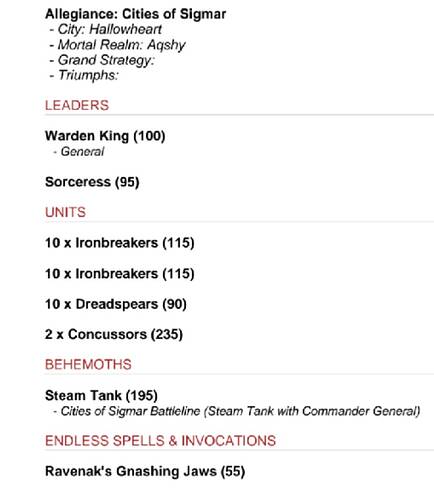 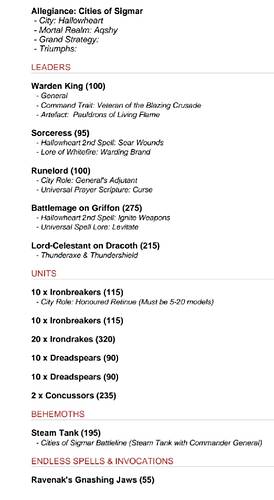 All of which is my first attempts with a new book and new ruleset so as I said please let me know if you see anything incorrect. As I mentioned the most exciting thing for me about all of the above is no extra purchases

I did it slightly different. 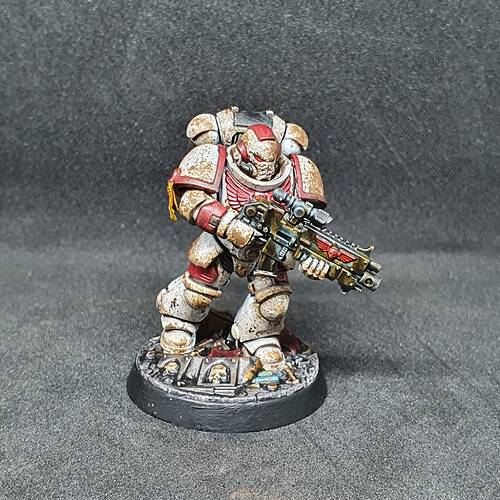 I’m considering darkening some of the rust spots again

Grim Dark Space Marine there @MichaelX ! Looking great, really like where you’ve put the reds in there too

Hopefully it’ll do well in the shop now

These lists in front of me has spurred me on a little I must admit.

I have finished the competition mini I started this month and I may have also moved onto a bit of an Achilles heel for this thread, Warmachines.

I’ve struggled trying to adapt the white scheme onto the Warmachines so far, I’ve opted now just not to include it, in keeping with the theme of this army being a quick army painted scheme I just for covering this in easy metal scheme that look rough and unkept to fit in with the rest and I’m happy with what’s been done here, I think I’ve got my Warmachine scheme now… 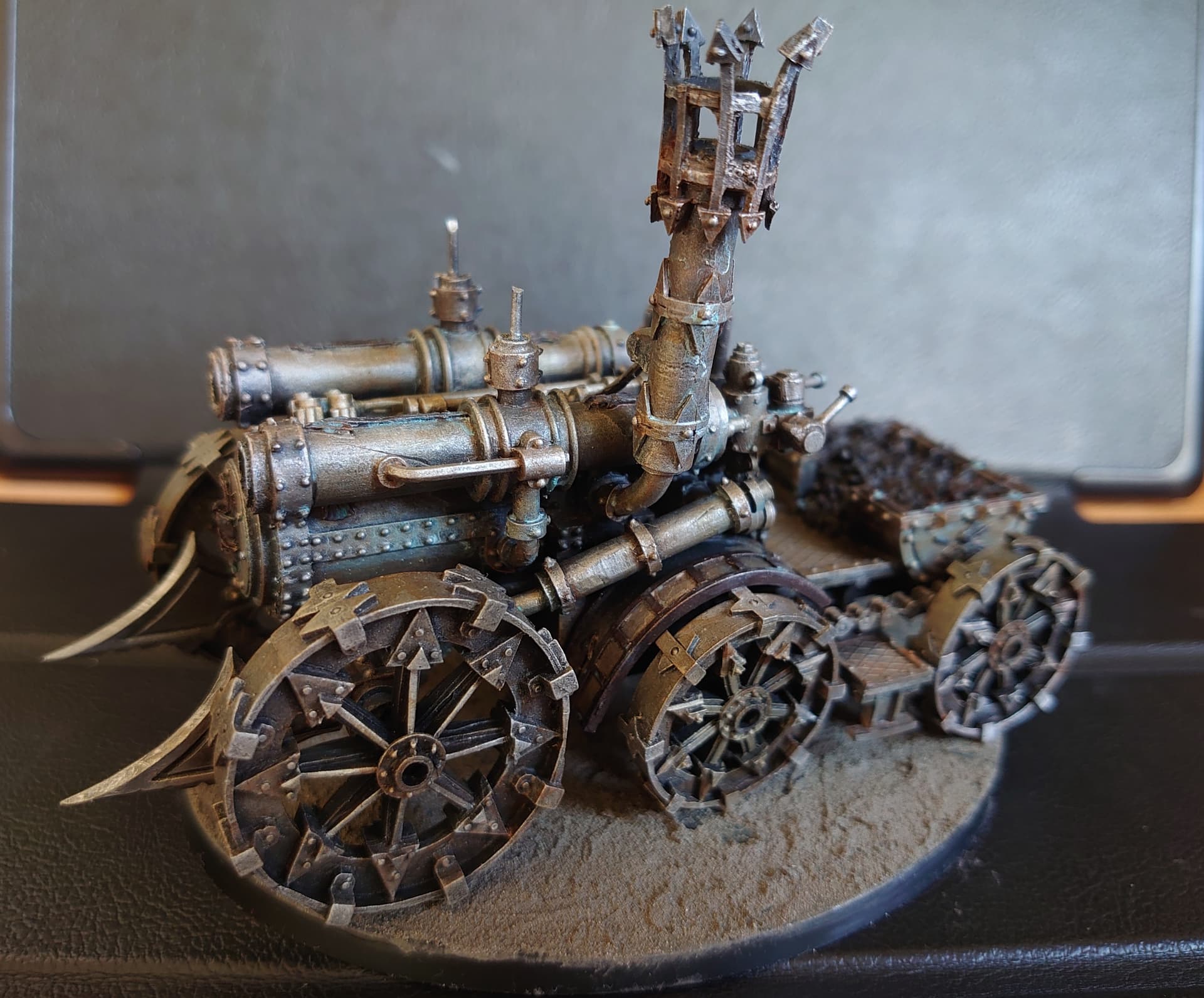 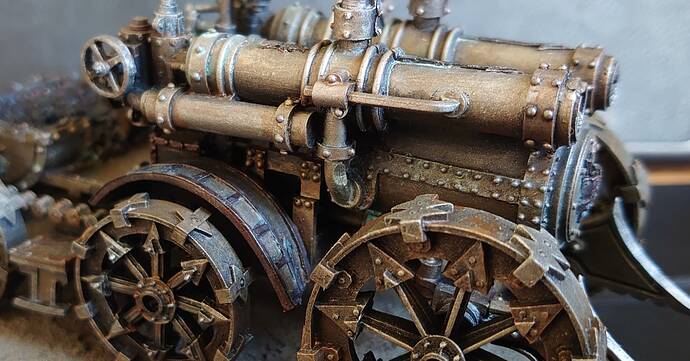 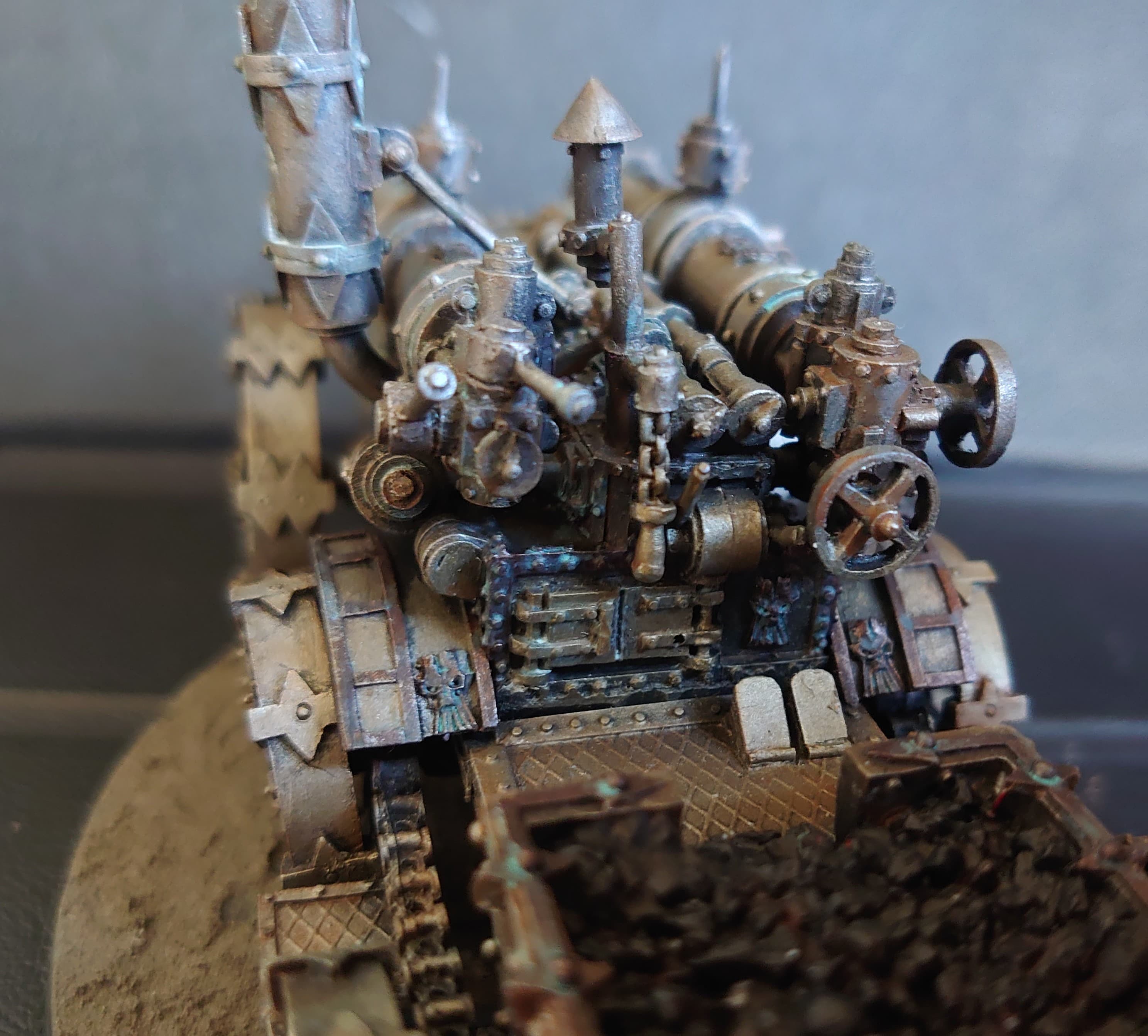 … I’m also thinking I’m going to leave off the extra stars on the wheel, I like the streamlined look to this.

A little WIP of one of the crew too 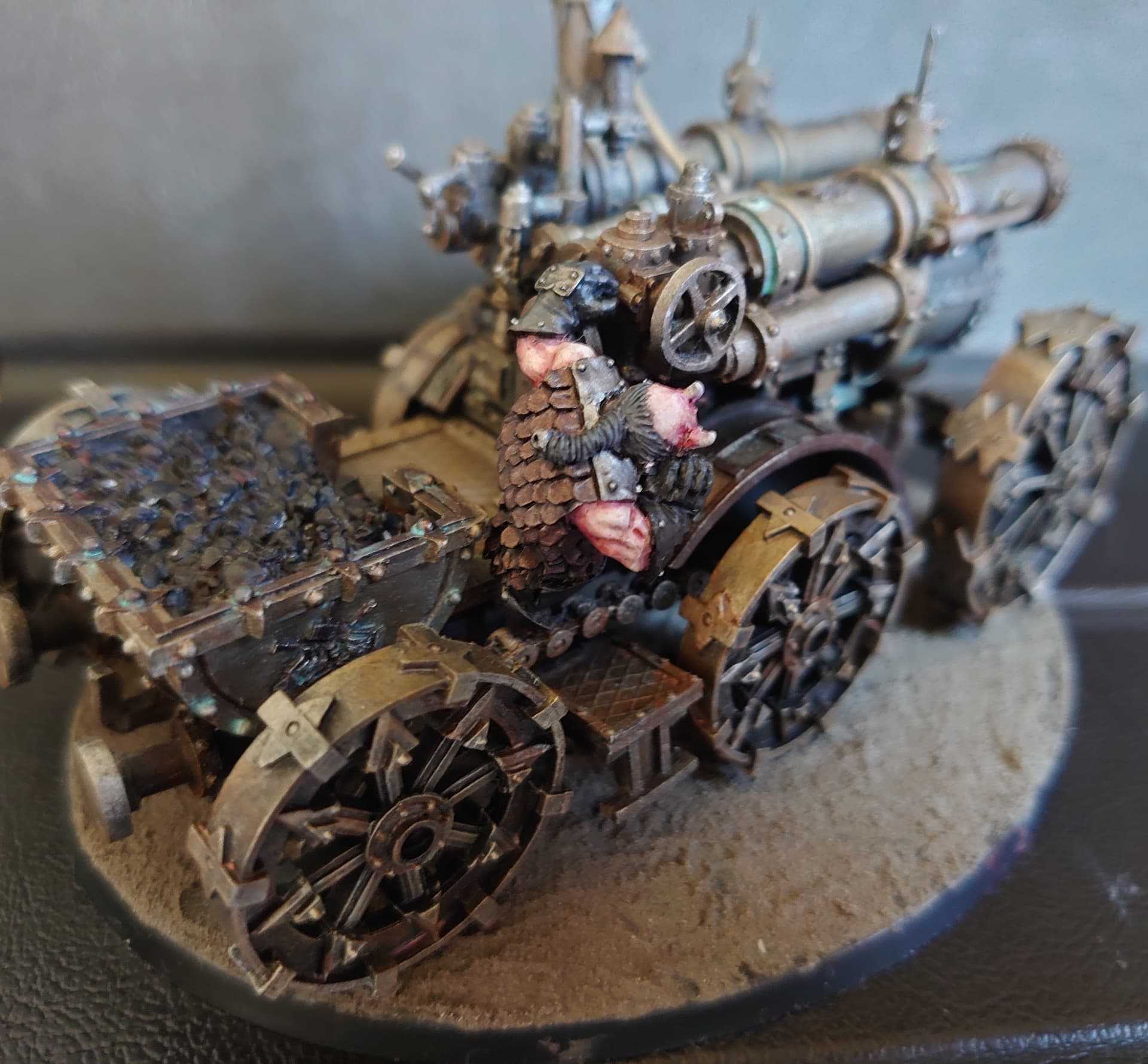 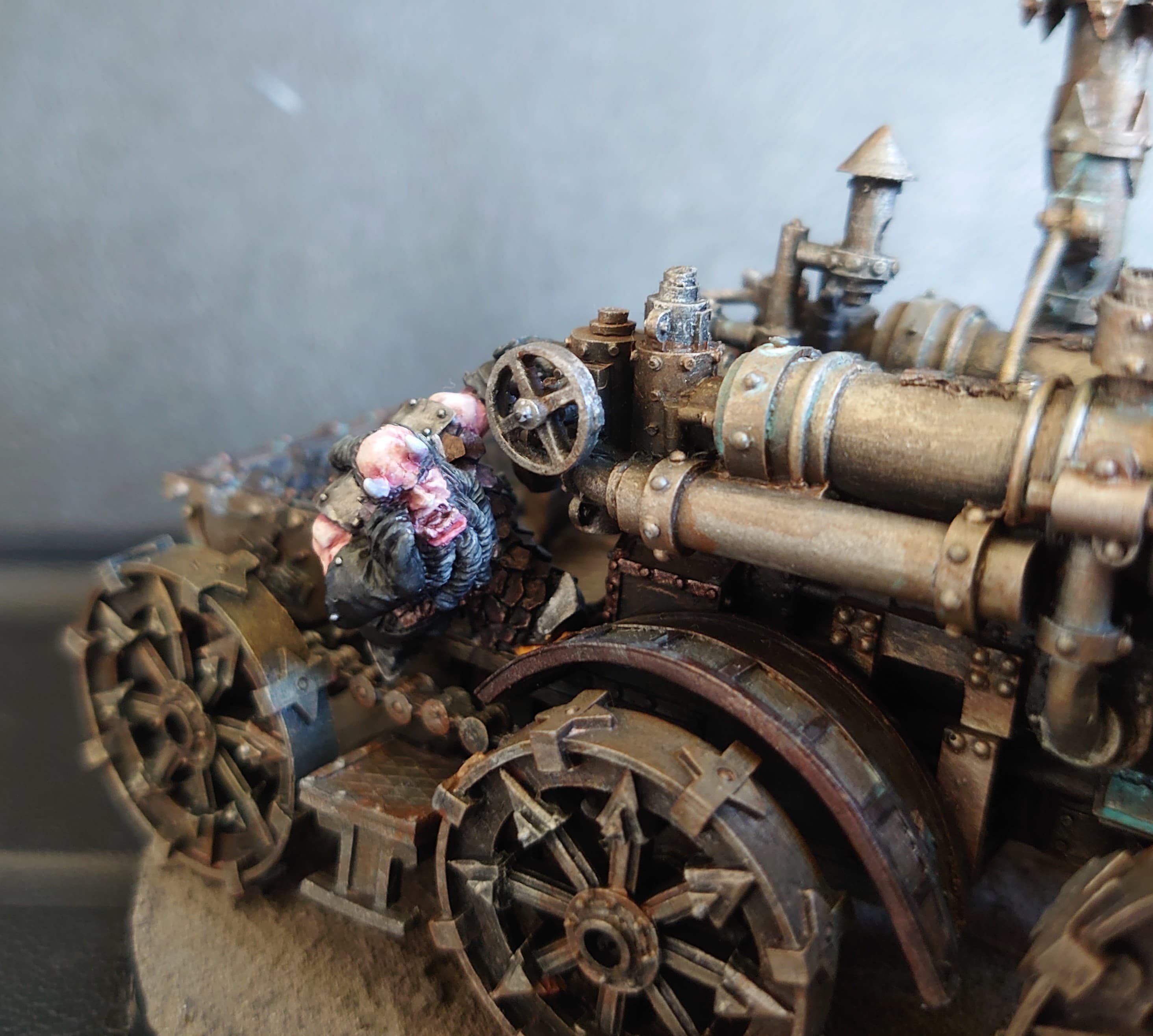 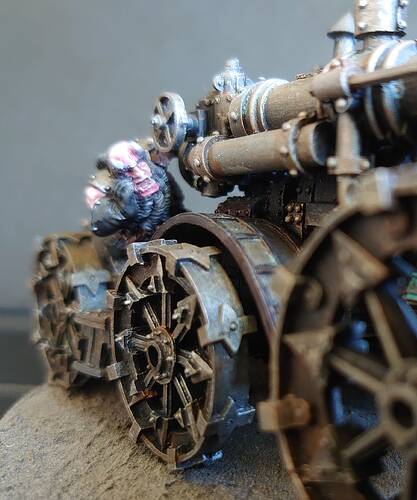 This month’s project is less about painting and more about gaming, over the moon to get my first games of 3.0 in. 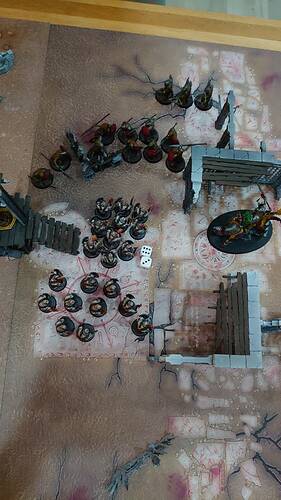 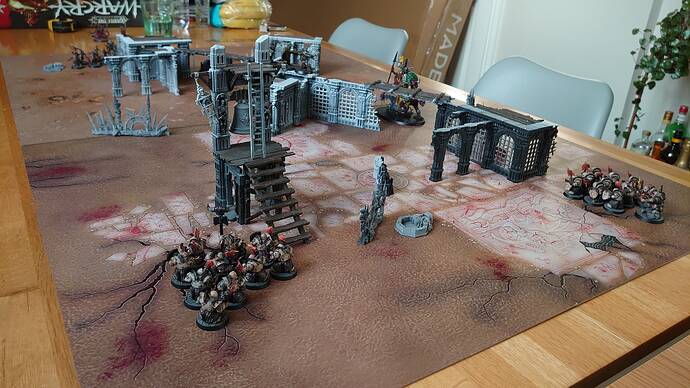 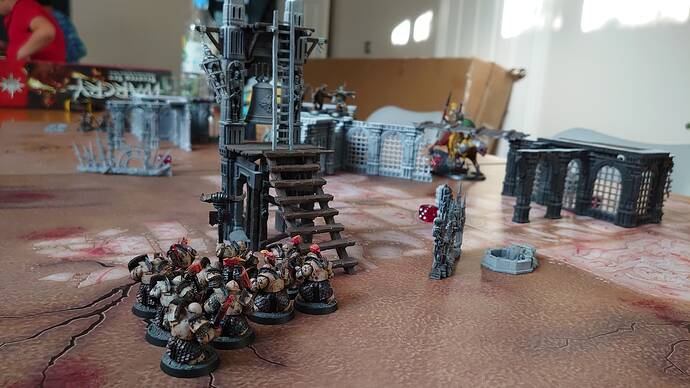 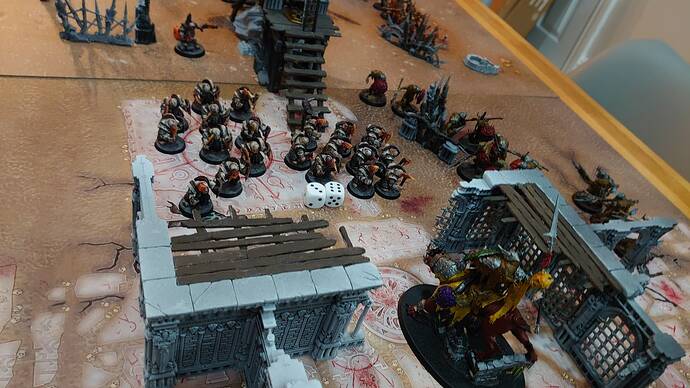 What a fantastic game 3.0 is, gone are the days of standing about waiting for the others to finish their turn, it was great being involved in almost every phase and super easy to pick up. By the second game we were flying.

That being said Mortal Wound output is devestating on 1 wound units and definitely felt the pain of the new Kruleboyz shootaz and their big boss, they are a fantastic army and very cool models

Can’t wait to get some more games in, it’s great getting painted minis out on a board to play

Noticed the WarCry box in the background there, What do you think of it? We have been playing loads of WarCry this last year, so good.

Hopefully that’s all changing soon though and be a playing on a more regular basis.

The Dominion box I accidentally bought I’m breaking the Stormcast into WarCry units, gives me an excuse to paint them a couple of different themes

Finally can post these, completed a little while ago to play in my first 600pt Cities of Chaos list (as Dark Elf Dreadspears) so thought why not enter them in my first comp as it was running at the same time 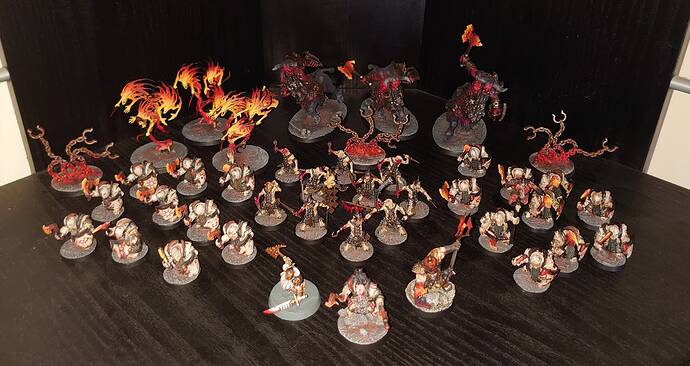 They fit in beautifully @GhraskDragh

So glad we got you involved in a golden hat at last!

Great army! Got to say I love the hot soulsnares, lovely touch.

The red warpaint on the hobgrots was a super nice touch, it immediately grabbed my attention (and respect) for a simple but extremely effective touch of balancing colors.
Loved the guy with the red arrow on top of his head, pointing the way. At least that’s what it looks like to my old eyes.

Thanks so much for the kind words guys.

@Uther.the.unhinged those shackles are such cool minis and I love the idea too. I thought it was fun to include something in a list that would slow down movement and such as a nod to the old Earthsaker rules that halved movement

@MichaelX @Fuggit_Khan that’s exactly what I was going for is a more menacing feel to those guys with the warpaint, everyone having the right hand covered hinting at some kind of ritual from that particular clan

@Oxymandias yes man it’s great to finally enter one, especially with all these archived posts coming up it’s making me realise the veteran medal I could be in if I was ever able to complete something to enter, even with this one it was a coincidence I was painting those to play a game and though f’ it I’ll put these in

Looking forward to next Artisans now, I’ve got my eye on those Veteran medals

Some of the old collection is on here too on the old blog, a lot of the classic minis, most of them now passed on…
https://discourse.chaos-dwarfs.com/t/archive-ghrask-draghs-army-blog/5077

Played more AoS, this time ran them as Chaos Dwarfs at 1000pts rather than Cities, was hampered somewhat by the fact that I painted all these minis for a different game system all together but they still held their own… 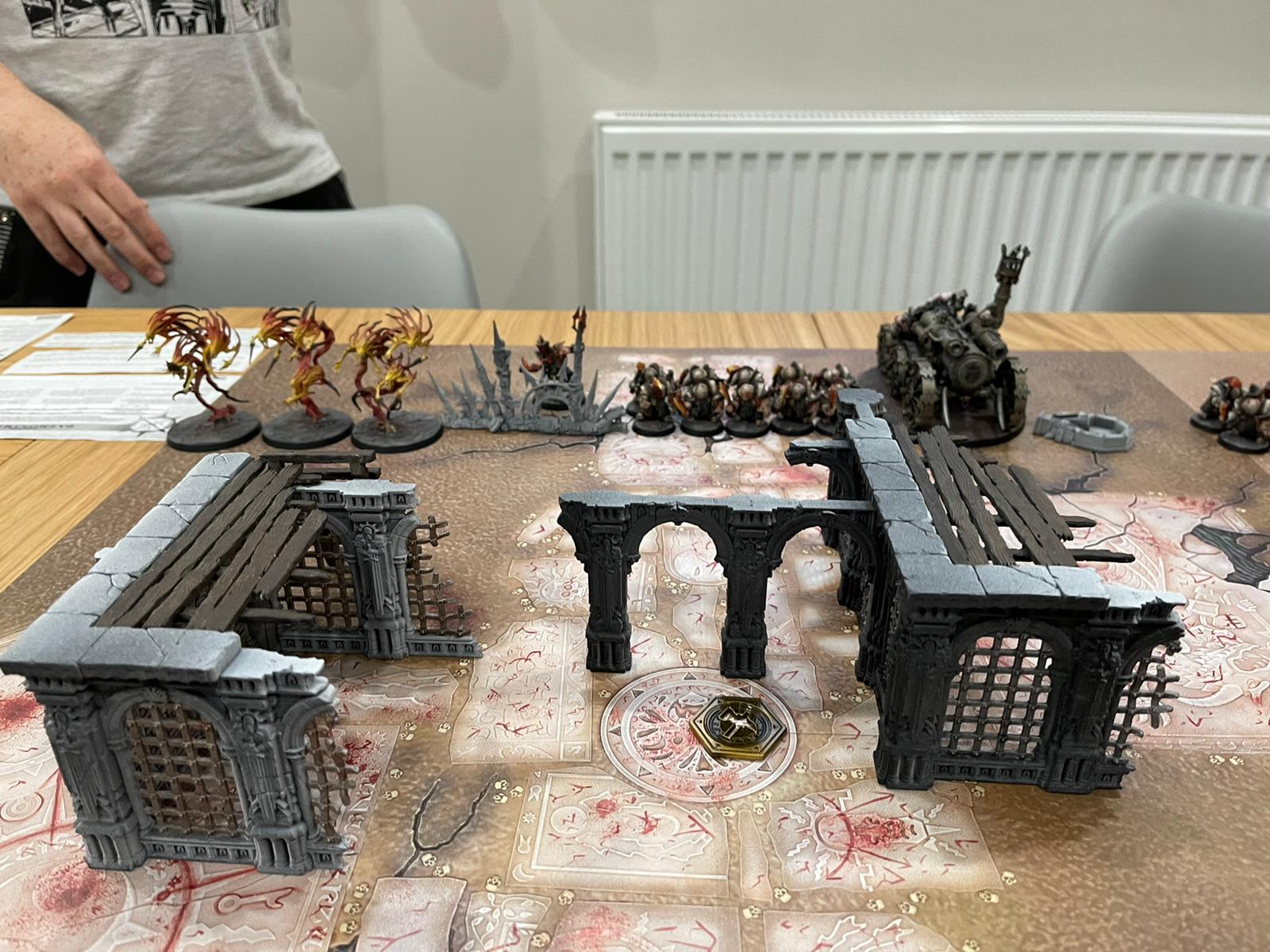 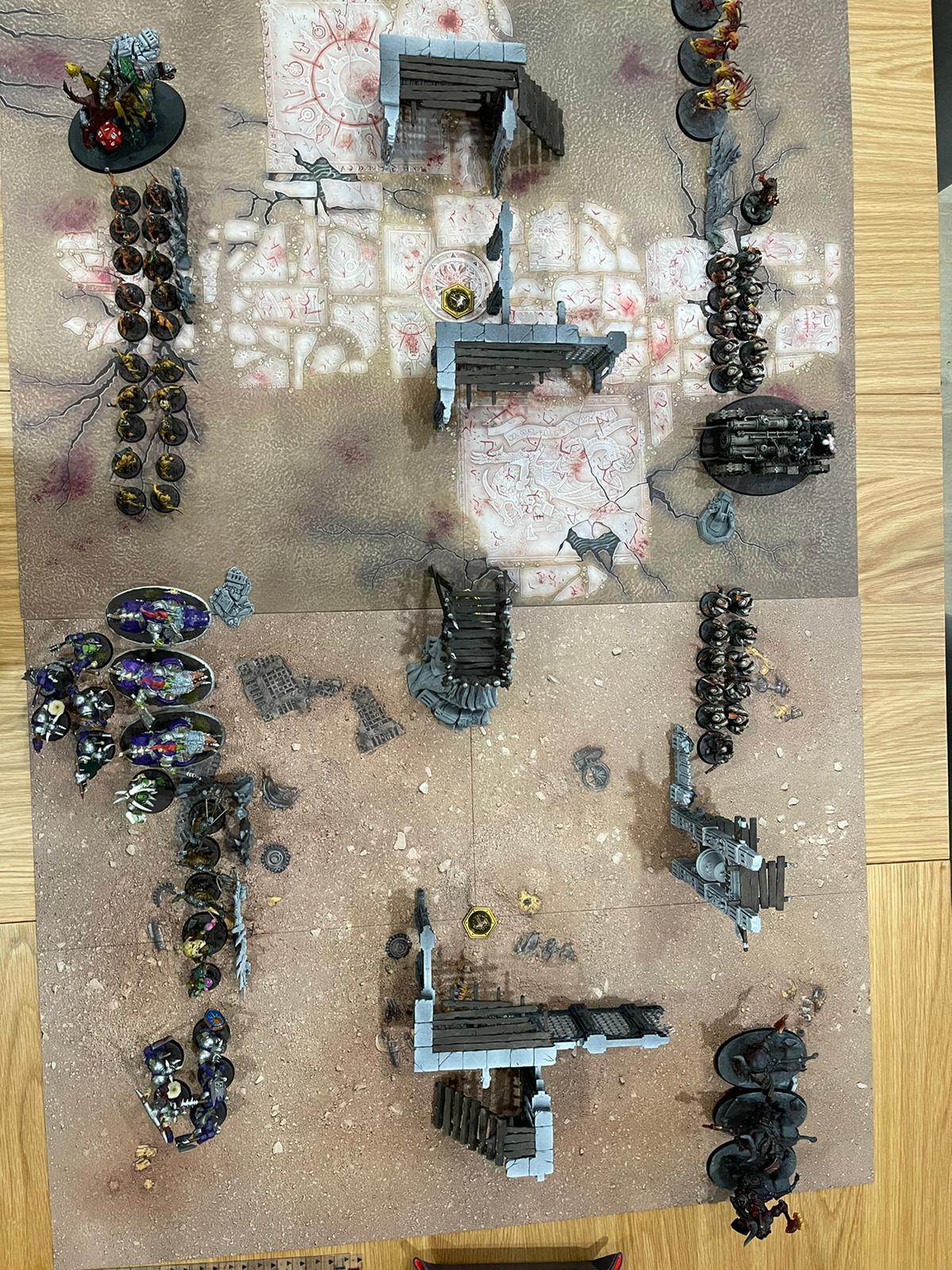 The Iron Demon completely misfired first turn, ended up doing more damage to itself than it did then enemy, but made up for it on the second turn earning me the battle tactic for that turn. Was funny in retrospect

Could of done a lot more I think with the Bull Centaurs, I misread some of the terrain we had and if I could back would charge then in sooner, instead they ended up tanking an objective for way longer than they had any right to 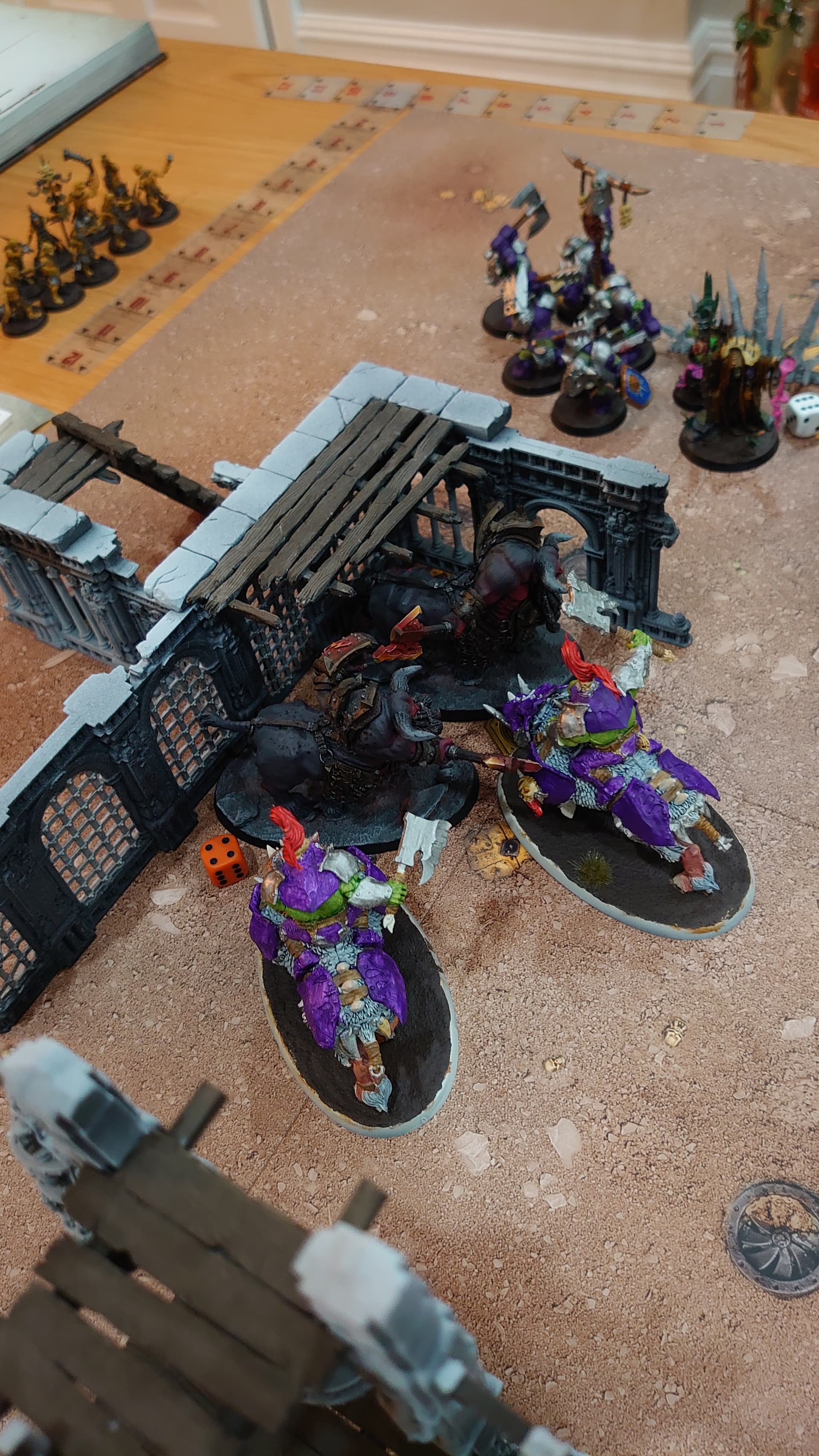 Kruleboyz are a great army and the mix of Warchanter doubling damage on the Gore Gruntaz was devestating and of course the mortal wound output on the new boyz was great again. 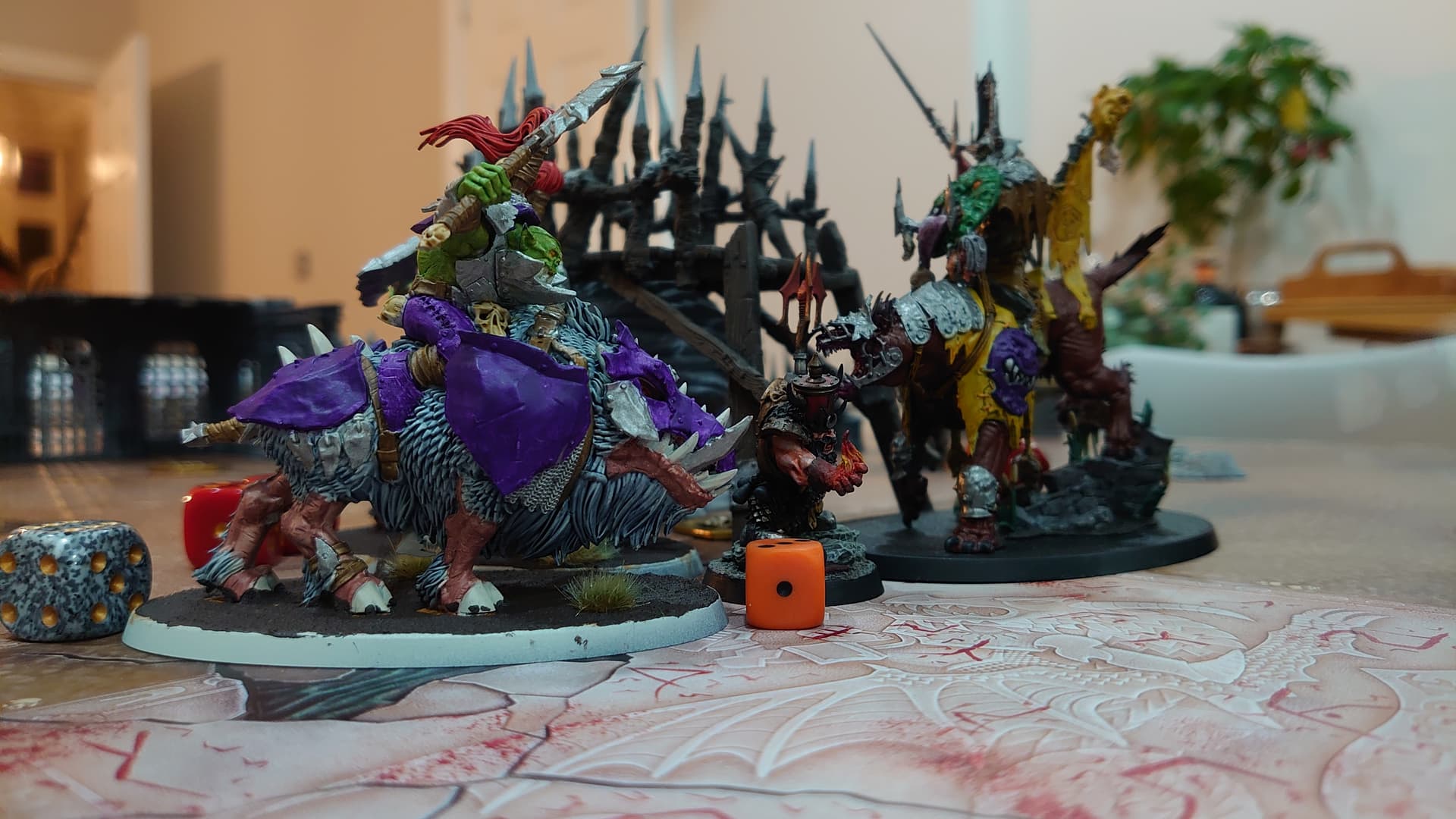 Loved the game and looking forward to running them more as Chaos Dwarfs in the future, but this time with a list written for this game system

got to have the Taur’ruk in there running about and thinking about what else to include.

As for our Path to Glory I’m not sure I’ll go with Chaos Dwarfs for that, I’ve expanded out my Chaos Dwarf collection to include some taller friends 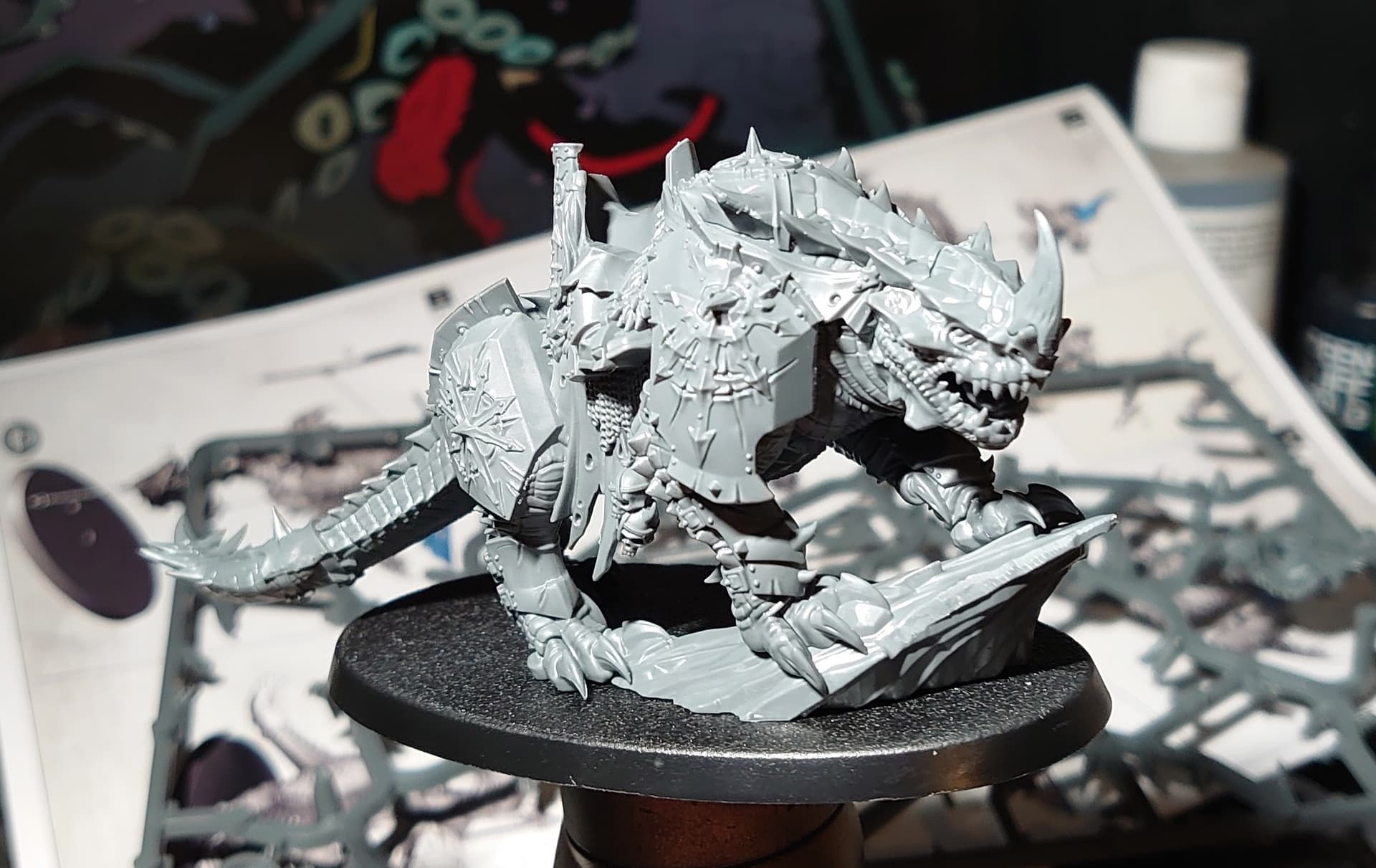 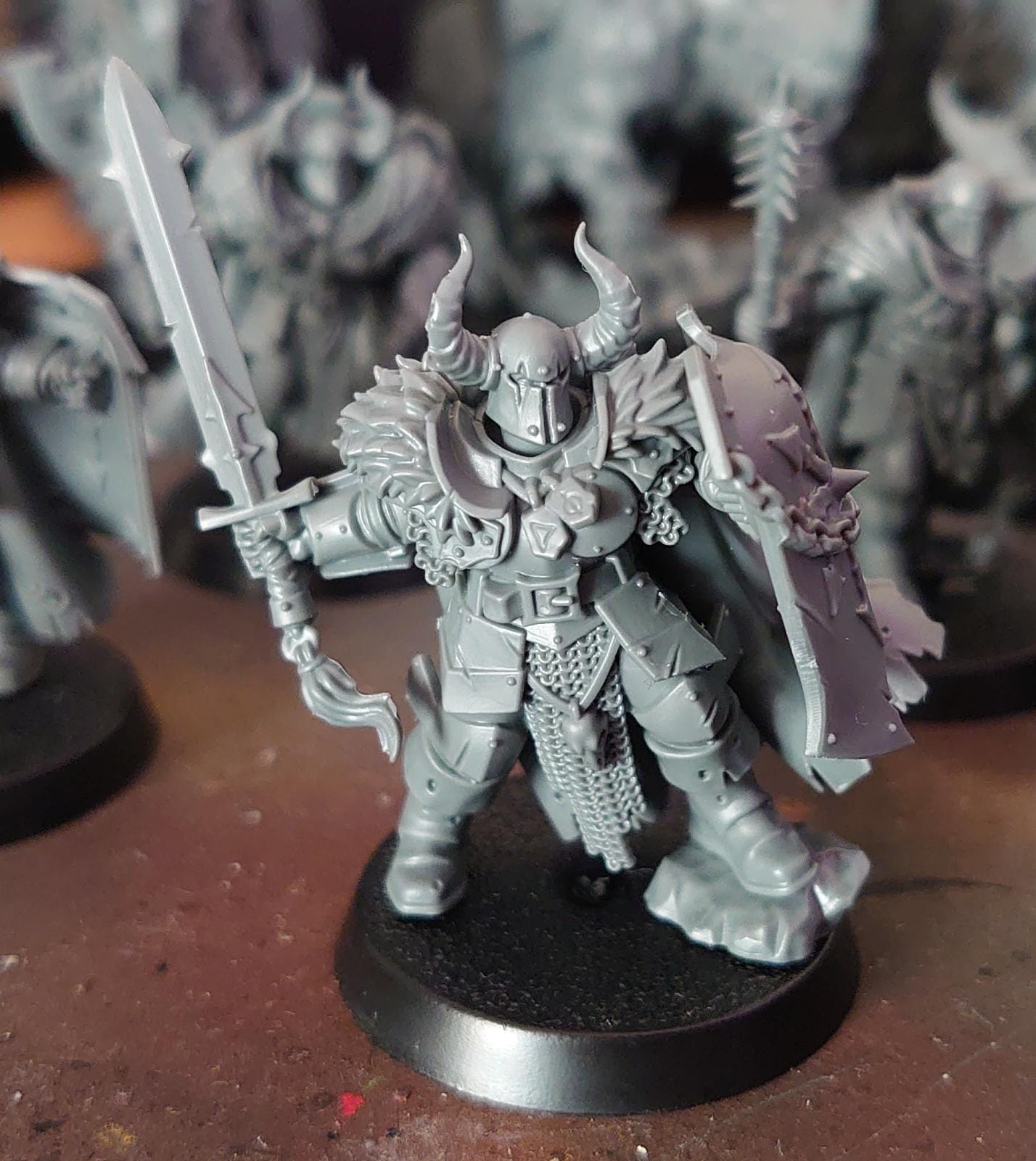 Yes I’m thinking Astrogoth hasn’t just got the Dwarfs running about under his spell, thinking they live in splendor whilst in reality they linger is disrepute, he may have some Choas Warriors under his spell too.

So I’m torn at the moment to either apply the same bone white, rusted horrible scheme to these guys too, or just use them as a normal Slave’s to Darkness army painted in the colours of the Sons of Horus?

So I’m torn at the moment to either apply the same bone white, rusted horrible scheme to these guys too, or just use them as a normal Slave’s to Darkness army painted in the colours of the Sons of Horus?

hmm, the white is very cool… Sons of Horus too, but i’d vote white.