As the title says!

Both CD lines are heavily armoured and at least the warriors by LK have big and different hats: 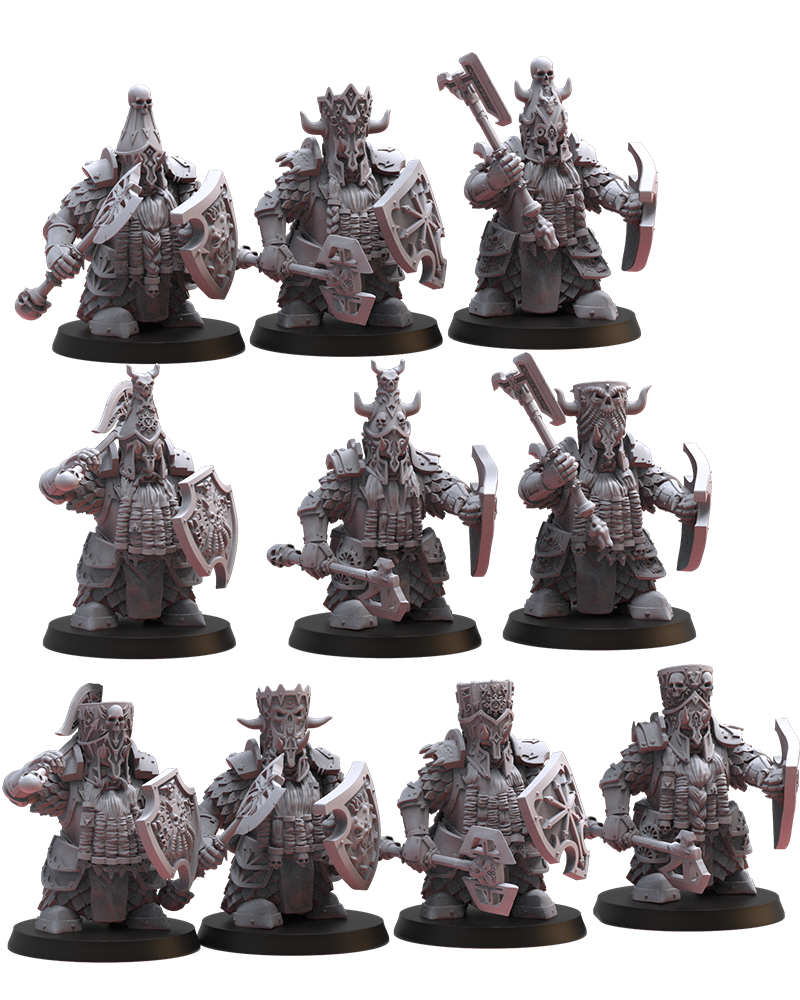 Most models come without a base (except those with a scenic). You can download the bases you need for FREE in our section of BASES

as do the RA ones:

The LK models seem to have less variety in terms of individual poses.
And I don’t quite know about the size, could be that the RA CDs are more bowed, but I didn’t have LK models in the hand yet.

Does anyone know how they look next to each other?
Are some of them visibly more elite and should therefore be of a different type/status in an army?

LK also have some “Immortal Guard” that are trying to be even more elite, with bigger hats and even more uniform than the warriors; a comparison with those would be interesting, too.

These are the only models of LK and RA that I have found ad hoc (no brilliant photos), but should suffice for a comparison. 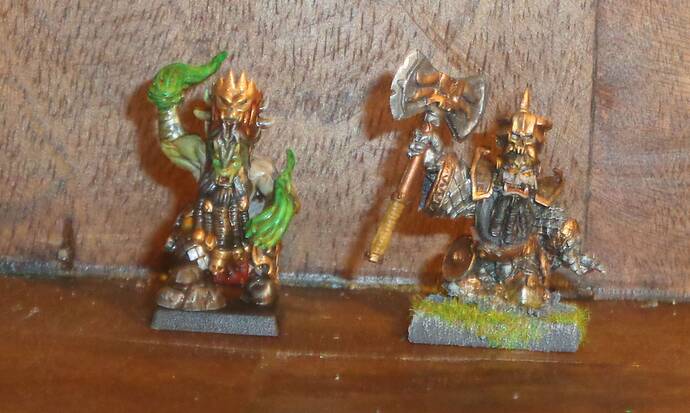 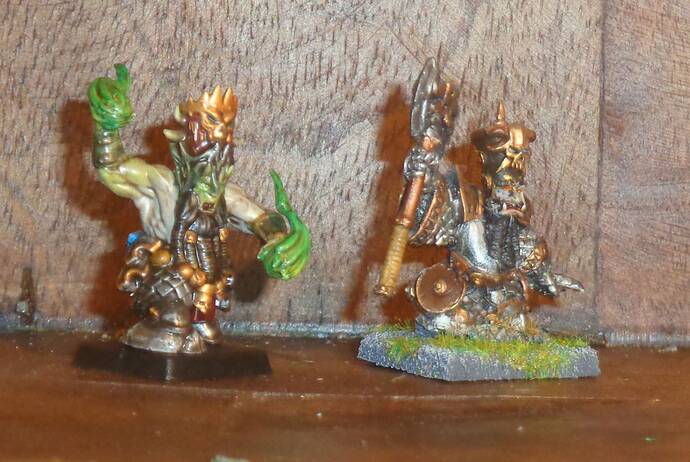 That should work out just fine! I am not 100% sure of scales, but the difference in detail should be negligible. Lost Kingdom’s miniatures often have finer details while Russian Alternative’s are more varied, but if you apply a somewhat consistent color scheme it won’t be a problem.

Thanks to both of you!
I do believe that both lines would fit in the same army, the question is rather how the regiments look side by side to each other. That is if they rather tend to be seen as equivalent or one of them more elite than the other.

In my case, I have some RA minis with blunderbusses and got offered crossbows by @Zanko that will need torsos, which could or could not come from LK.

Edit:
I was just about getting some LK models and look for myself, but they are offered in 28 mm and 32 mm scale. Which is the correct one to choose?

The main thing experts in LK will tell you is that they’re very big if you use 100% scale. 85 or 90% printing seems to be better if you’re bothered by fit.

If the seller offers the choice between 28mm and 32mm, what does 100% mean, and how do I imagine “too big”? Does it not fit onto 20mm-bases or does one have to puzzle the minis into formation?

I remember reading from people, regarding human miniatures, that they rather recommended 30mm (which is still not 32 and rarely offered) to better fit to contemporary warhammer humans. But it could be very different for (chaos) dwarfs.

I have to defer to printers like @MichaelX and @Oxymandias here, but the way people always talk about it is, when you’re preparing the STL to print, you resize it to be 15% smaller than the file default. 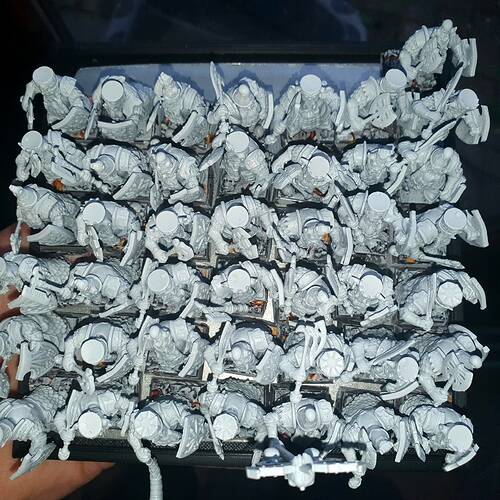 This is the 87% scale version. It’s the first circle of hell… 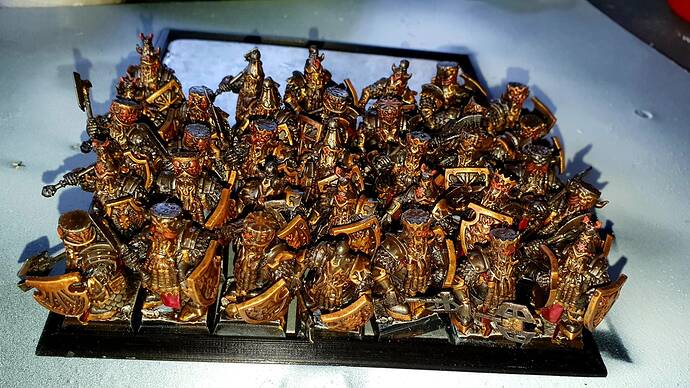 As MichaelX says, the original bodies are quite large. I have made special regiment bases to position the warriors. 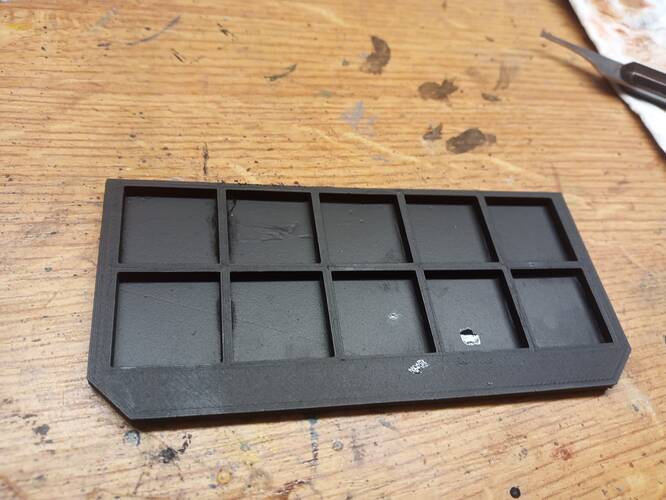 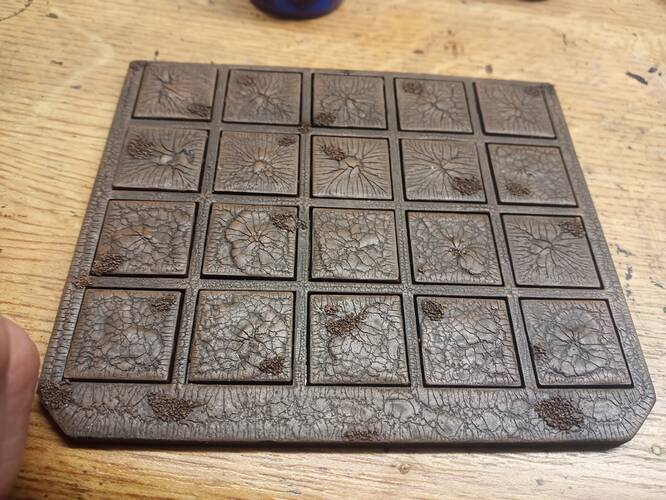 I have made special regiment bases to position the warriors.

This is something a normal person would just solve by taking 25mm bases, right? ^^
Do you need them for a skirmisher on 20mm or was it just easy enough to print such a thing?

Yes, it would probably have been easier to put them on 25mm base. But I didn’t want to, besides I have a filament printer and could print the stuff just like that.
The front edge is the same as the 5 x20mm.

And nope no skyrmishers, the bars are 2mm, skyrmishers can be much further apart.

It’s been a while!
But I have bought myself some answers!
Above mentioned few months ago, but they just arrived today. ^^" 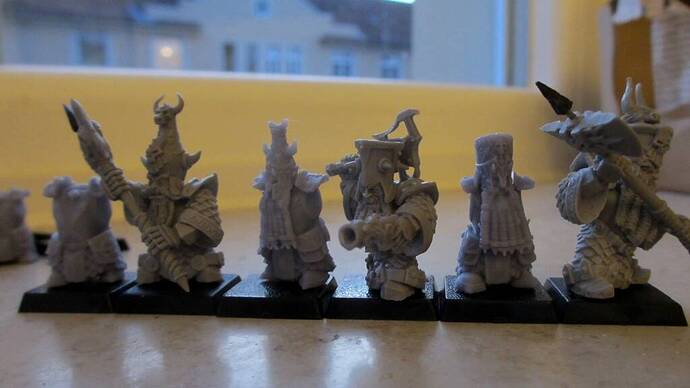 What do you say?
They are printed in 28 mm (whatever percentage this equals to) and as it seems, they are remarkably slimmer than the RA ones (you have to think the latter’s army away, but still). The hands are even more different in size.
Should I rather have asked the seller if 30 mm are possible? This would make them 7% taller which could be the missing difference while 14% (for 32 mm) could be too much.

In the end I’ll have to see if @Jasko’s crossbows will fit the size of the base models before perhaps reordering more in a different size, but if they do, what would your impression be about putting them next to RA ones? Even if they are in a different regiment.

Better photo, including (some) hands & arms: 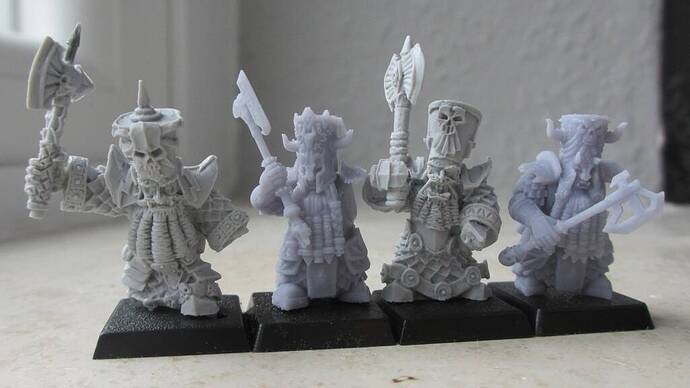 RA’s “remastered” CD with GW, as on this second photo, are a bit slimmer than the original ones (from the above photo) already, so maybe they kind of fit after all.

Looks fine to me kuanor. They will all mix in great once painted

This specific combination fits surprisingly well. You actually have me wanting to paint my RA and LK models together too.

Other than the great weapons, do you have any other troop types from both companies?

Consider that the GWs on the second photo are converted into HWs (because I wanted some but the RA’s ones had, for inexplicable reasons, helmets instead of hats). Originally they have longer shafts and are hold with both hands.

Other than the great weapons, do you have any other troop types from both companies?

Not yet. I was eyeballing the bull centaurs, but only LK has models that will surely fit on cav bases. The RA ones have to compete with the original FW models (for being Renders) and I’m not convinced. In any case they would have to compare with the Renders from LK, not the normal ones, and I won’t buy those.

I‘ll make an army blog thread in some future where I’ll show more of the built and converted (for now mostly) RA stuff.

For the size of the LK models, after further comparing, they look still a little too small. Especially the hands and heads should stay far apart from the RA models (and I did want to mix some hands and weapons…). If I buy more models (again, after trying on the crossbows), I’d try getting either 30 mm models (that is 93,75 % instead of 87,5 % for 28 mm) or let only arms and heads printed in a larger scale. But probably it will be 30 mm overall for the next try.

I recently got @Jasko’s crossbows!
Now look, they indeed are 28 mm and fit: 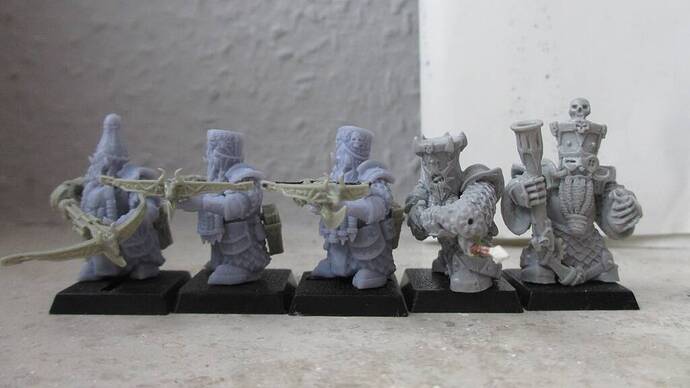 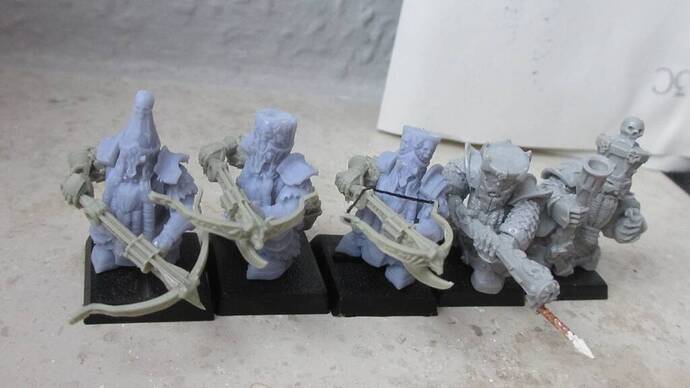 I had to change some of the arm positioning, some angles seem so have somewhat changed from the resin cast to the 3D files. Which is not the problem and the size is a success!

But this is the moment where we can create an opinion about two things:

I’ll make an army thread soon but until then…

I like the prints, but I think the crossbows are too big. Could they be made a little smaller, or are the oversized arms part of the design?

Otherwise, I think the models could also stand together in one unit, because different body sizes are normal not only for humans, but also for Dawi Zharr.

I like the prints, but I think the crossbows are too big. Could they be made a little smaller, or are the oversized arms part of the design?

In any case they could not because I don’t know of any .stl files of the crossbows. ^^
Jasko had some resin casts left that he gave me. The hands fit the hands of the 28mm-prited bodies, so I’d assume they are by design that bid.

What I’d imagine would be that they look better in proportion on 30mm bodies if the then 7% too small right hands are negligible.

About the RA comparison, even the more crouching RA CDs (the left one on the last photos) are remarkably broader and have bigger heads.
When ordering new prints I could ask for a different scaling in width than in height, or for a different scaling for the heads than the bodies. ATM I am not convinced that it would do somehow better than upscaling the entire models to make them fit better with RA as well as with the crossbows, but again I’d be grateful for advice.