So for the Secret Zhanta 2 project that I joined waaaay too late, and got lucky enough to actually be accomodated, I decided to take my stab at an idea my recipient, @Stumpy, came up with (I think, but if I’m wrong someone will correct me). So, here is how I made Walhut in a way that might actually be usable as a Taurus proxy.

First, grab yourself a walrus. Not just any walrus, mind you, the beefier the better, and ideally something that’ll be able to withstand being dropped. I found this beatuy (MOJO Walrus Animal Figure) on eBay on the cheap and it arrived almost three business days later.

I then grabbed some aluminum foil, folded it over a lot, and finally rolled it as much as I could into a sloped cylinder to be the base of my hat. Then I covered it all with white milliput (since I had a lot of it on hand and didn’t want to waste my greenstuff). Wait about 10 mins or so, and smooth the milliput out with your wetted hands. Be aware that this leaves a slight residue on your hands, but it washes of super easy. Let it sit and cure. Since it’s a chemical reaction, heat will accelerate the curing, so let it sit near something warm if you want to speed up the “cooking” process. 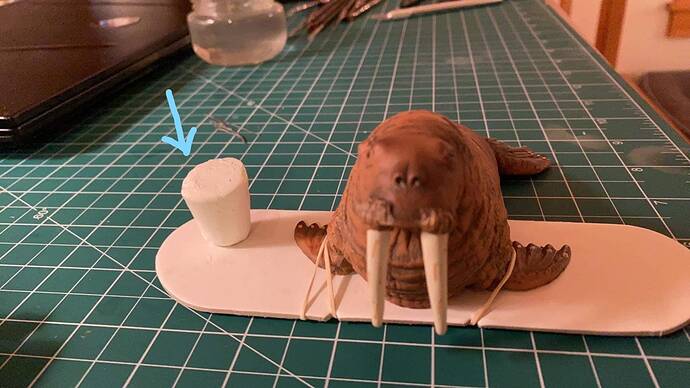 Then it’s time to start the beard. I pre-drilled five little holes in the walrus where I thought the beard was going to go. I then made five small skewers of wire (gage doesn’t really matter as long as it’s stiff enough to keep shape, but pliable enough so that you can bend it to the curve you want) and then made little balls of greenstuff, each around a 1/8th of an inch in diameter (about six or seven per wire). I then skewered the balls with the wire and created little strings. The balls will smush into each other, and then you just have to have at it to make the joining spots between each ball look like hair held tight by a band (or something like that… you get it, some sort of plait). 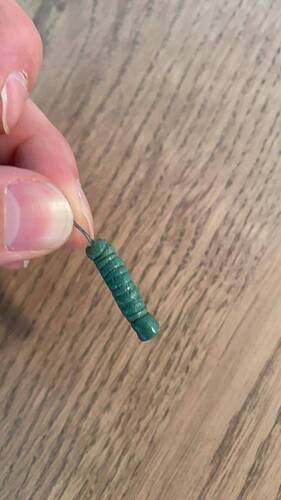 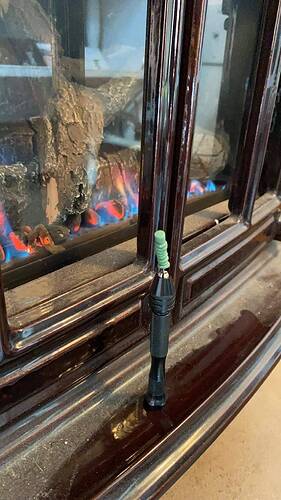 Again, greenstuff cures, so heating it up makes it softer (which facilitates a second pass of detail-work), but also speeds up the curing.

Once you have the beard ALMOST hard, push each skewer back into the pre-drilled holes.

While the beard is curing, you can work more of the hat. Just add flair. I added some strips of greenstuff to the top and bottom, and added a little bowl on top with sculpted fire, as well as two horns (because what self-respecting Walhut wouldn’t have horns on his big hat??). 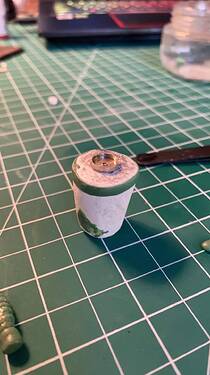 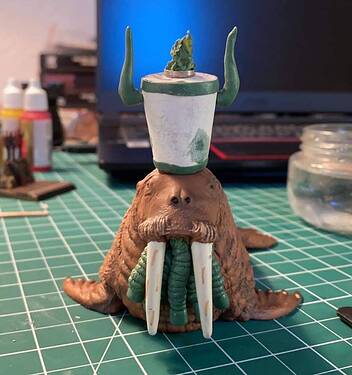 Once all those dried, I added two more going slanted in each direction to be lighting bolts. I also added an emerald looking gem in the center of the head. 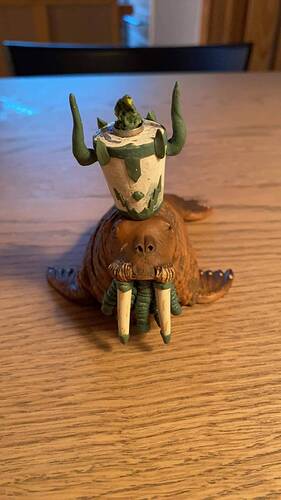 Once that’s done, it’s off to the airbrush! I repainted the figure because I wanted it to be darker, and his skin tone was much too light. So starting off with a black prime basecoat, followed by a zenithal hightlight focused mainly on his head and his spine, and we were in business. Dark brown and mahogany vallejo air colors were the ones I used. 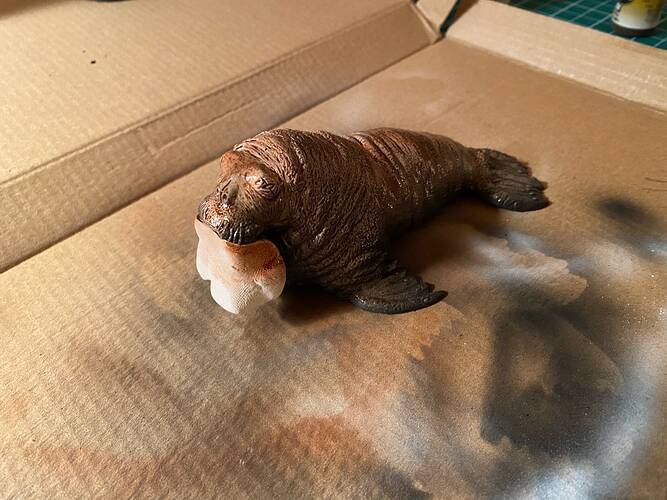 Make sure you cover the tusks so you don’t ruin them (since it’ll be nicer airbrushed white than painted via brush). For the hat, I did a couple of reds, and then brushed black over the metals again. 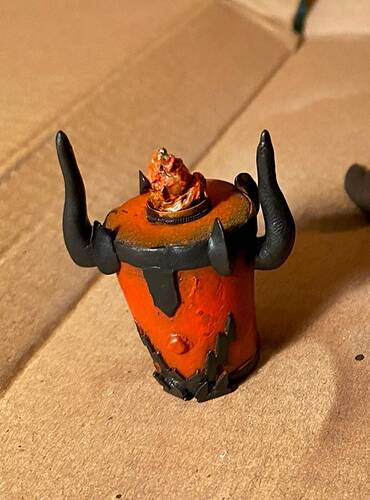 Then I drybrushed the ever-living crap out of the metals and went over the fuego again, trying my hand at a little wet blending (cheers @Reaver for showing us how) 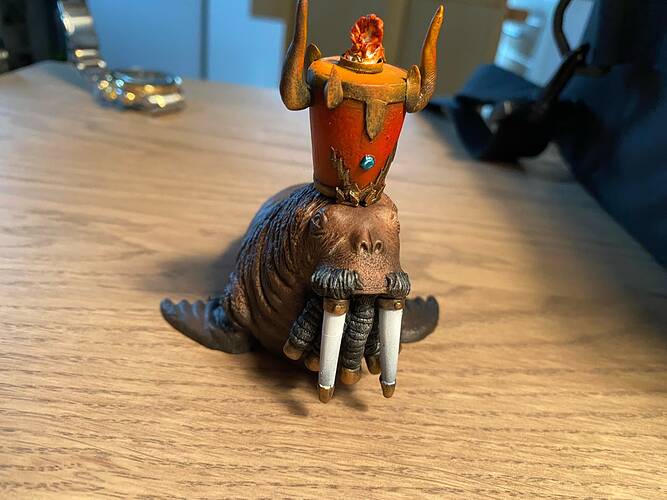 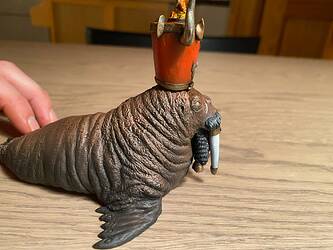 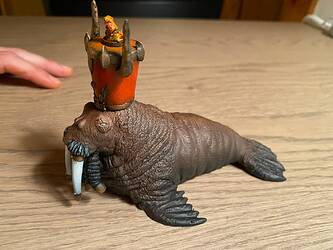 Finally, because this was a gift to a fellow servicemember, I HAD to freehand something vaguely reminiscent of a unit of his, so I found a cool one (on his prompt, actually), and painted it on replacing an insufficiently chaotic red cross with a Rune of Walhut. 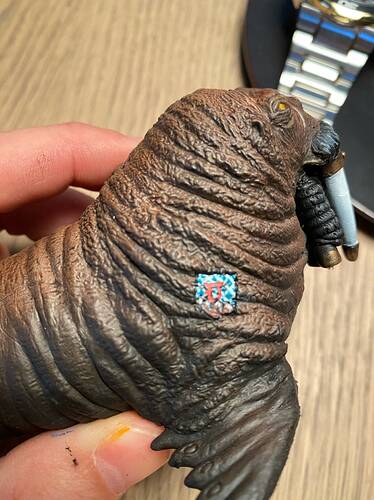 Et voila, there you have your own Walhut. Now let’s praise him by slaughtering some Norsca.

Could have been a golden hat entry

While I can’t claim Walhut as my brain baby , I cannot aptly express the gratitude I have for your work, and this tutorial! Having my old unit patch on it, and the perfect likeness of my attempt at drawing on my phone, holy hell man! This is amazing, and the personal touches really bring it home! Thank you so much, brother. 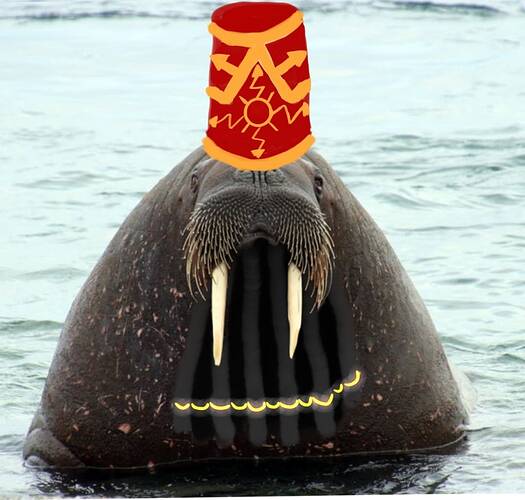 Such an epic build. I’ve never actually made this connection before, but it reminds me of: 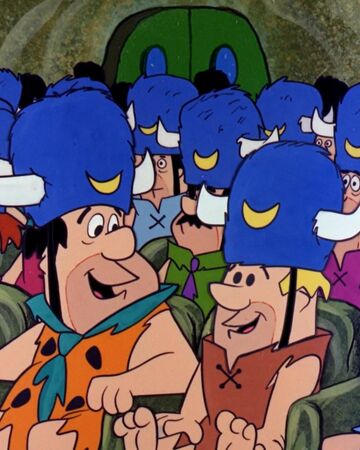 “Hold my flipper in your palm, and all others will fear what blubber like ours can do.” - Walhutian Acolyte, probably

Walhut’s Bristly Beard! What a wonderful creation passed between brothers of the Great Tusk. A perfect gift for one of Walhut’s most fervent zealots.

Great to see all of the documented WIPs!

This made me so happy! Thank you @KhamdrimSkyMaster 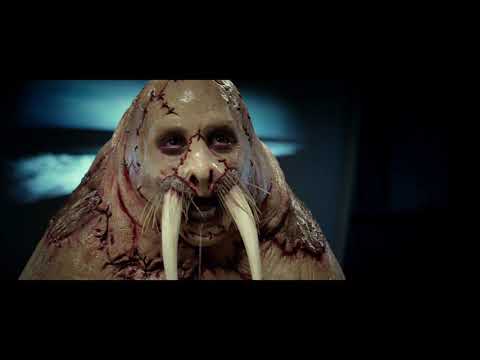 Ma che cazzo? I’m profoundly disturbed now, but I feel like I have to watch this

Oh count me in for that, this film was done off the back of a podcast where they all got stoned AF.
Crazy, crazy film

Such a cool take on Walhut @KhamdrimSkyMaster , when AoS inevitably gets around to adding the mighty Walrus to their madness CDO can proudly say ‘we did it first’

you bunch of crazy ba…

This is glorious! Well done. And my sides!