We have secured an interview with Lost Kingdom Miniatures. Most of you know them but for those wo don’t, they are creators of a beatiful Chaos Dwarf range called the Magmhôrin (among others, like Tomb Kings, Brettonia and Lizardmen).

Just as with the Rick Priestly interview we would like your input for questions we can ask them. It will be an email interview. Not sure which edition it will be in, but it is in the works.

Anything, specifically chaos dwarf related, but also about their other ranges, you’d like to ask them? Please let us know down below!

Great initiative @MichaelX !!! This is gonna be class. At work now but I’ll start thinking of questions for later 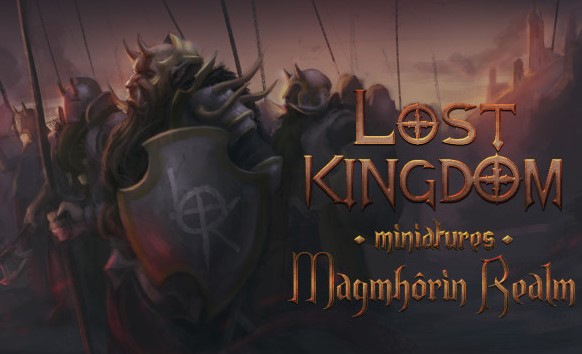 Back when they were released, Adrian (the sculptor) did this interview with OTT.

Awesome!
This is something to think about…

“Are there any plans to do any other races in the future?”

Hey everyone - you can imagine the podcast team is super excited about this - we’ll be sharing our ideas on the thread along with you guys! Here’s my starter:

What do you consider to be the distinctive “Lost Kingdom” style that you bring to these ranges?

One of the truly outstanding elements of your work is the extensive reference to real-world ancient cultures - what’s the creative process like for researching ancient architecture and motifs?

You’ve spoken previously about the samurai influence for your Magmhorin; what led you to add that element to the Mesopotamian aesthetic?

You’ve done all the classic monsters, but you’ve also broken new ground with your sculpts. What was your inspiration for the Magma thrower?

Which Chaos Dwarf ranges, besides the '93 bighats, are your favourites/inspiration?

How have the Magmhorin fared commercially, compared to your other ranges?

If you ever returned to the Magmhorin and added more to them, what would you design next?

The scale of your architecture is truly epic in the default dimensions. What influenced that choice?

Ask them if they will consider hobbos!!

Why noone thinks about the hobbos?!?

Imagine them going… good question… well put them on the to do list!

So why did they even start with Chaos Dwarfs in the first place? Was it more of a business decision, looking for a faction with a strong fan base but lack of recent/affordable sculpts by a certain large company, or are/were Adrian and the others Chaos Dwarf players before?

“How do you feel about Games Workshop potentially ripping off your style with their new Lord Kroak model?”

They have though. First thing I thought was “hey… I sorta have that model…”

Yup, thought that too

That was quite sad actually. Felt bad for them

Weeeeeeeeell, I mean it’s not like LKM did not lean a little on allllllll the other designs by GW for their range. They all but say “hey, wanna play the popular game Warhammer by Games Workshop but don’t like their models or can’t get them anymore? Print our Lizardmen, Tomb Kings, Bretonnia or Chaos Dwarf armies and play Warhammer by Games Workshop, but with our models”

Plus, their Slann is now even closer to an official GW model and thusly a viable alternative for people who want to print out their own stuff.

Totally, I agree 100%
The difference it makes for me is that gw is a icon. It has the market, like World of Warcraft of Magic the gathering.
So it’s normal that people are inspired in some of their works/characteristics.

But when a company as strong and powerful as them, go out and “take inspiration” in something a company of 3 drunken Spanish just made, it’s just sad in my eyes

a company of 3 drunken Spanish

Maybe don’t use these exact words when addressing them @MichaelX

“So, you have been described by others as a ip stealing company founded by 3 drunk Spanish, how do you feel about gw now ripping you off. Did you even notice, you bunch of alcoholics…”

@LostKingdomMiniatures if you ever read this…
just goofing around, we love you. Drunk or not

Lost Kingdom, would you be willing to put all of your chaos dwarf and tomb kings STLs you ever plan to release in consecutive months so I can take advantage of your patreon and then dip out for good and then print myself into blissful oblivion? K thanks bye.