Warhammer Quest and Dreams of Hashut

Following on from my old (Archived) Warhammer Quest and Dreams of Hashut thread it’s probably time for something really transformative for this new off-topic showcase thread. 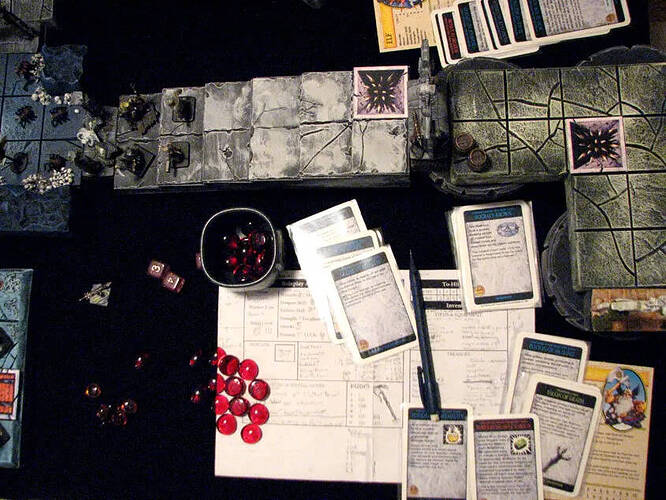 There’s the requisite minis, my 3D WHQ sections, as well as the dice, Treasure cards, Warrior stat cards, and our homebrew character sheets. The red beads are Wounds. When you’re at full life the little containers we have are full. As you take damage you just take the corresponding number of beads out. It works amazingly well as you can see how badly the party is bleeding out in the middle of a battle by how many Wound counters are out on the table and strewn across character sheets.

What you don’t see in the photo are the Dungeon Deck cards, Event Deck cards, or the goodly-sized Roleplay book. All of this extra stuff takes up some serious real estate. I can’t stress enough how essential the Roleplay book is at higher levels - you’re constantly looking up special rules you’ve forgotten (How does the Chaos Dwarf Blunderbuss area of fire work again?) or rolling on tables for Magic armour or Chaos spell tables, etc. Plus, you’re flipping back and forth constantly in the Roleplay book confirming Monster stat lines, etc. Sure, some of this could be cleared up by printing out more Event cards for the higher Battle-Levels with a card/cards for each Monster type in the tables, but it’s cumbersome nonetheless due to the need to reference the Roleplay book so much.

TLDR: WHQ needs a ton of extra table space just for all of the metadata and there’s time wasted continuously just looking up rules/stat information every couple of minutes. This needs a fix!

So here’s the problems, as I see it:
1.) There’s too much stuff on the table (and my boards are oversized by 50% too), so eliminating non-essential components would be good.
2.) A significant amount of time is spent looking up rules, etc. every time new enemies appear… the Roleplay books are 27 years old and our scanned/printed copies are in even larger unwieldy binders and my pdf copy is on my iPad (which also links back to #1, above).
3.) If you don’t want to proxy Monster groups, WHQ requires an insane number of models, but those models also take up space and need to be immediately on-hand so gameplay doesn’t grind to a halt.
4.) There is a LOT of time required to clean-up after a game.

My solution is to eliminate the Roleplay book at all costs, as well as the deck of Event cards. Hear me out - there’s no clear implementation to the Event deck after Battle-Level 1. As you draw cards, if it’s an ‘event’ then you deal with it (dead body, trap, etc) but if it’s ‘Monsters’ and you haven’t printed up new cards for higher Battle-Levels, then you have to roll D66 and consult a large table in the Roleplay book to see what the Monsters are. As part of my simplification step I’m also going to fix the Event deck issues. Also, having the Roleplay book on my iPad was a start, but it could be better - what if the Event deck was there too? This is where I was with my thinking in 2019…

Here we are, Fall 2022. I had some time on my hands during the pandemic, so I started a project that remains on-going - in the centre you can see my 4ftx4ft (1.2 m x 1.2 x) display cabinet. Each of the 4 shelves will be part of a continuous diorama with a total of 12 sections to house all of the models for WHQ. Top level is above ground. The Dawi Zharr will occupy the left 1/3rd of the bottom shelf. When complete this will allow the WHQ models to be immediately accessible (they’re all in separate containers and drawers now). 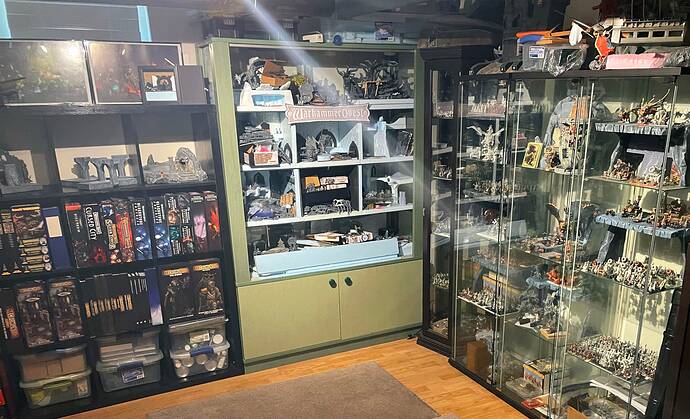 Feels weird writing all of this up, as I’m having major Deja Vu, all because I’ve been thinking about this and working on it for so long… but I digress.

So the next bit is where the transformative aspect I mentioned comes in. Our games will now be controlled by a server that runs in a web browser on a phone/iPad/laptop, what ever. There’s a Game Master interface and a player interface. The GM has control to add individual Monster types, download any of the pdf books, but also click any of a library of ambient sounds/music for dungeons, towns, forest travel, etc… and during games the GM can flip over cards in the event deck, which will then populate the cards to the player’s screen (or an ancillary screen off to the side of the gaming area). Left is the GM screen, right is the player screen. 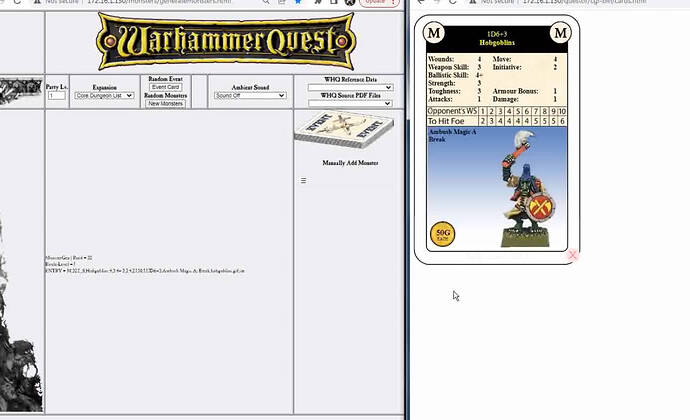 Hovering or tapping any of the special rule keywords on the Monster cards brings up a floating box of text with that particular rules entry. You can see that better here for the Magical Items: 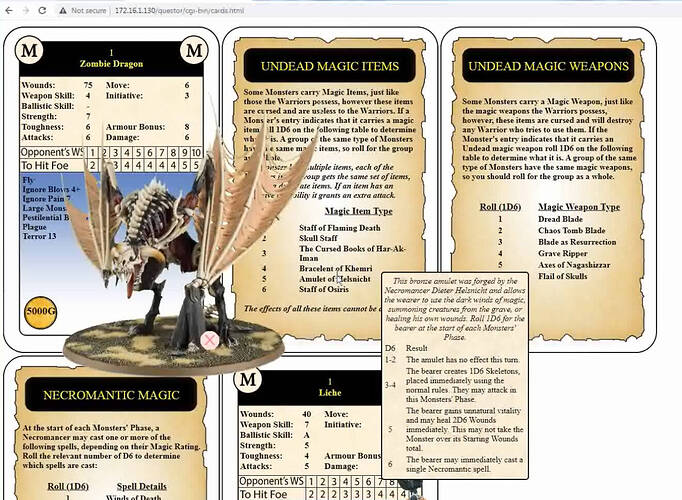 The cards are just a basic template that a database entry gets parsed into for display. Everything is in the database, right down to the graphic to show for that entry (Column U): 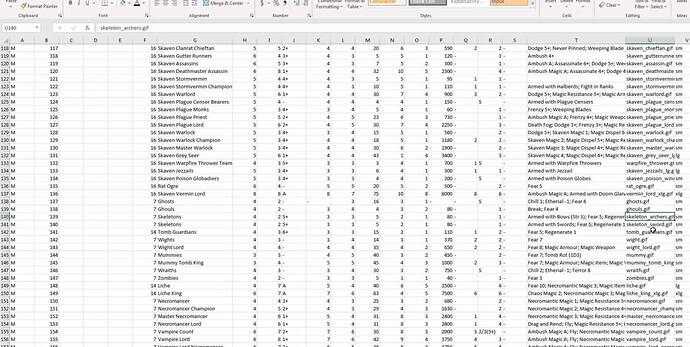 So the GM flips over an Event card and everyone can see if it’s a trap or Monsters or what ever. Great. If it’s Monsters, then depending on what type of Monster it is it will be in one area of the display cabinet diorama. Take a look at Column F in the above image - that’s the code reference to the area of the cabinet where those models will be stored. Chaos Dwarfs/Bull Centaurs/Hobgoblins, etc are all in area 8 (left side of the bottom shelf). Getting the location of the Monsters in the cabinet lets me send a signal via the GPIO pins to a specific relay which will turn on the lights in that area of the cabinet (mock-up shown): Wiring for the lights within the cabinet will be one of the last steps. 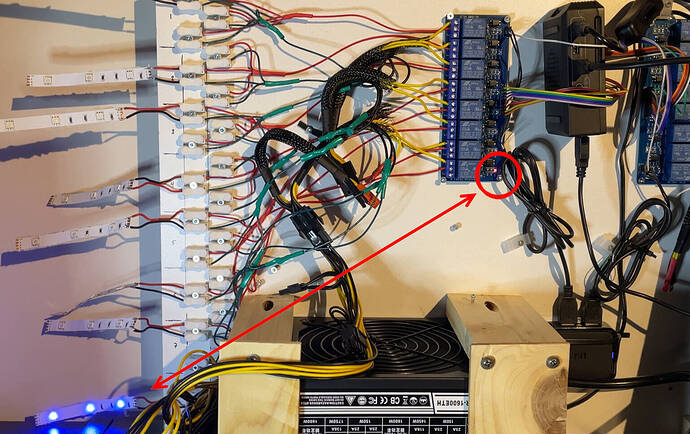 Having the lights come on in the area of the cabinet with the Monsters you need speeds up the ‘finding’ process. Once Monsters are beaten you just click the “X” in the bottom right of the card on the screen and the server will check to see if there are any remaining Monster cards in-play from that zone, if there are none then the server turns off the relay (and thus the LED lighting) for that zone.

The Raspberry Pi server could be run headless, as I only SSH in when making changes and coding, but I don’t need to run the system headless… Using the HDMI output I have a 7" screen setup with a slow motion video of swirling mist set on a continuous loop as soon as the server starts up. This display will go in the middle at the back of one of the shelves for the Undead Monsters, and it will be decorated all around to look like a doorway/portal. 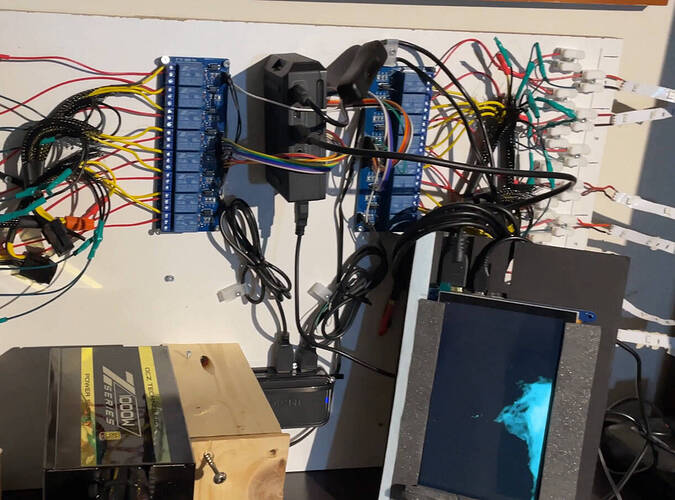 I also have materials for 10 infinity doors/corridors that will go in various areas of the cabinet to give the illusion that passageways disappear into the distance (sorry for the crappy lighting and green test LED… but you get the idea):

I also have materials for an infinity well that will be glowing green and will be in the Skaven area, as well as materials for a ~7"x5" infinity portal that will go into the Deamons area, and for that I have several miniature psychedelic LED units that rotate through a rainbow of colours and these will be setup with metallic reflective material: 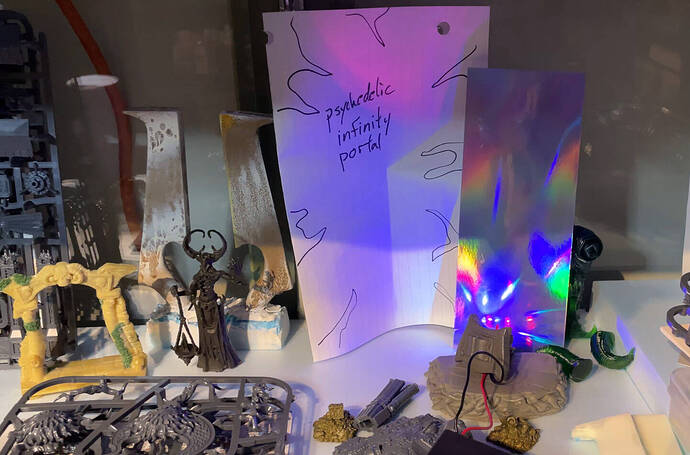 So that’s kind of where it’s at. Once this is done all of the WHQ models, including Warriors, will go into the 4’x4’ cabinet, the server and all the wiring, etc will go into the cupboard under the cabinet, out of sight. We’ll have ambient sounds for gaming coming from hidden speakers within the diorama, and the only materials left will be our character sheets, dice, Wound counters, and Treasure cards!

I’m also 3D printing components as needed. This piece is going to get trimmed down around the edges (I don’t know how to do this in software yet so I avoid printing unwanted areas) and several of them will go into the walls of the Dwarf Underway sections on the 3rd level: 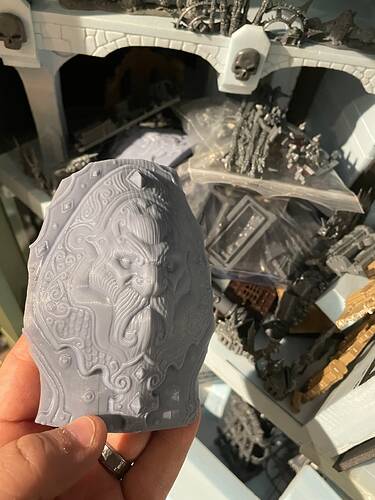 I’m ~350 hours in so far (had to learn/teach myself Python and all of the GPIO control stuff as I went). Now I’m at the stage that I can work on the diorama in manageable segments, as each shelf splits into 3rds and can be worked on and wired separately. Here’s the middle section of the second shelf, where the Warrior/Hero models will go: 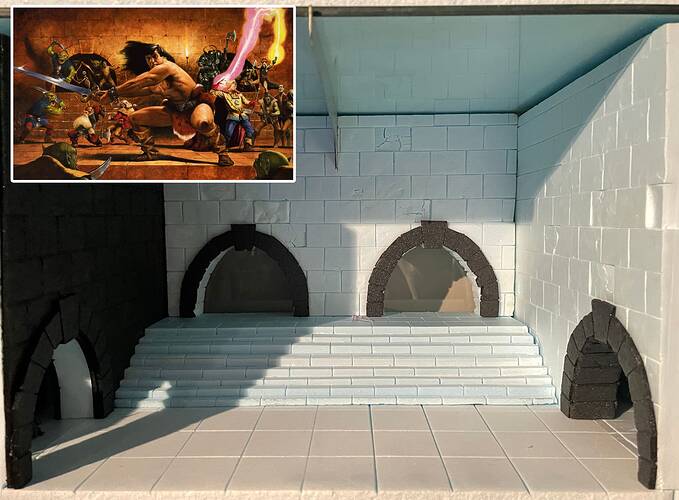 Not everything will get an infinity door. For some doorways, like these at the back, I can just print out large colour photo-quality copies of dungeon scenes viewed from a distance and stick them to the back, like I did here in this WIP pic for a 6"x6" shadowbox diorama: 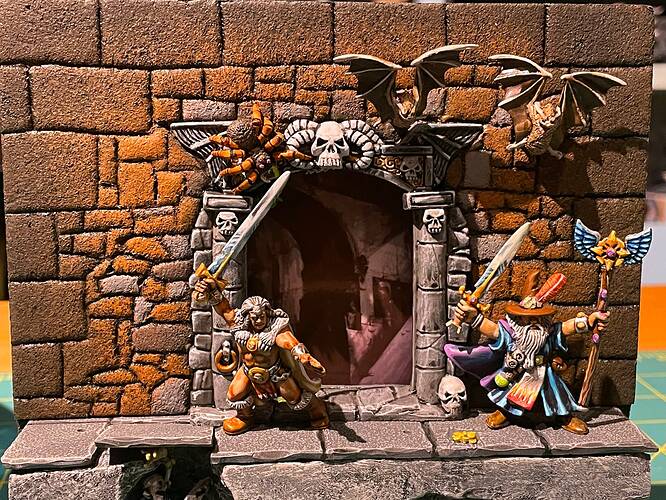 Once this is done there’s no reason it couldn’t be implemented for other games, like Blackstone Fortress, or other contemporary games like Warhammer Quest Cursed City, etc.

Here’s some on-topic CD stuff for this off-topic thread! 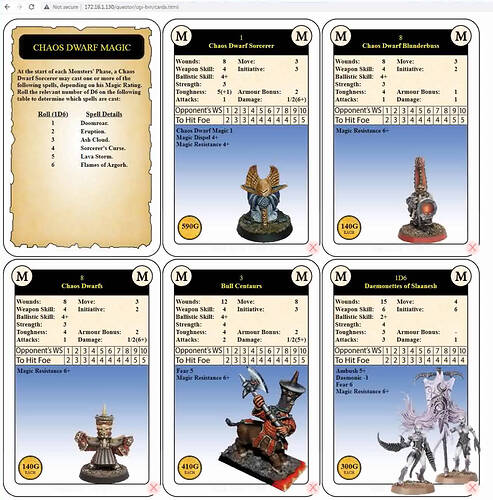 So happy you are back, this will be a journey to follow!

Great to see you back here! So much inspiration on this thread

Dude this is wild! Can’t wait to see it finished! 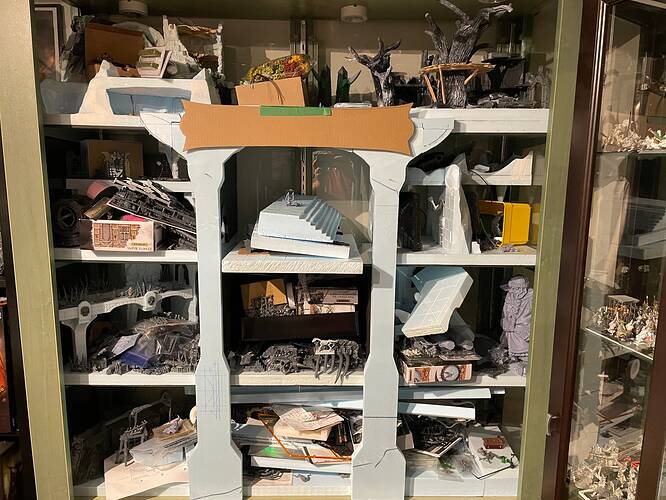 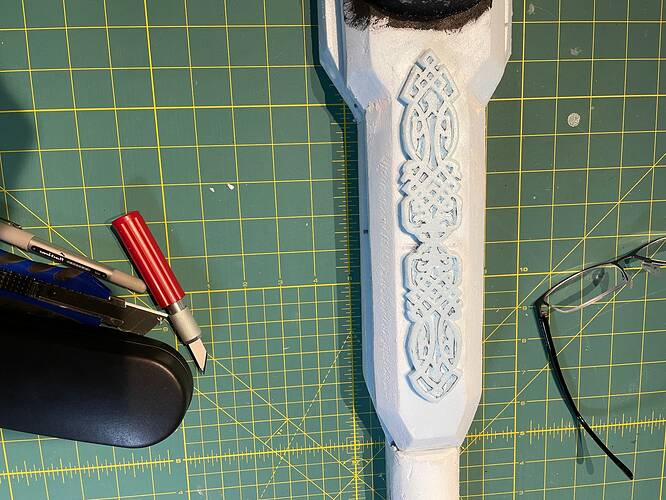 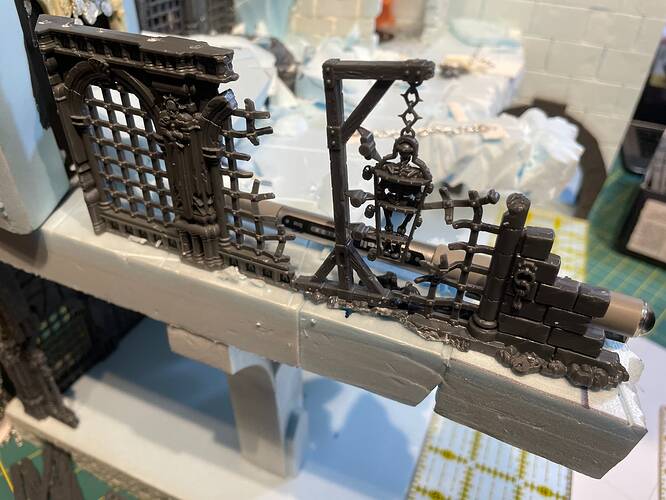 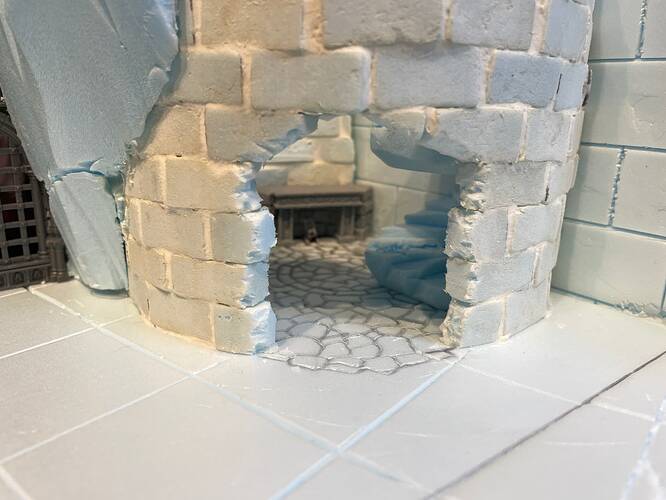 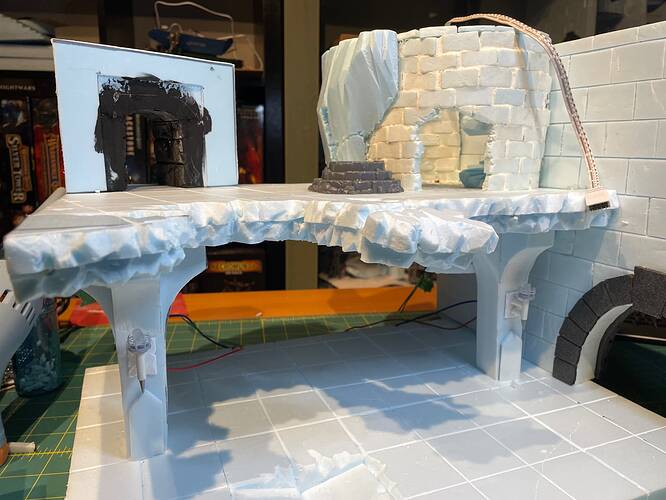 Getting there. VERY slowly. I can’t finalize too much, like permanently attaching fixtures and trim made of plastic down to the foam until I have primed and ideally painted all of the plastic pieces first. Then I need to basecoat all of the foam and paint it and attaching everything together is going to be the last step. Unfortunately figuring out all of the wiring and cutting channels to run all of the wiring through is really hampering some of this as I’m going to have to mask off huge sections of foam and prime some of the things like a light fixtures in place where they are.

Right now I’m just going section by section trying to get each portion to the 75% completion stage before I figure out where all of the lighting and wiring needs to be routed through. Once all of the 17 unique lighting areas have been completed I will do a sort of dry fit with everything in place and check that all of the wiring connections and lighting all works simultaneously with the server And the software that I’ve written. After that it will all get disassembled again and I will go back to working on it section by section finishing off all of the extra details with skulls and dungeon clutter and paint as I go to get everything to 100% completion.

Still easily looking into some time in 2023 before this is likely to be finished but I have all of the materials, including dungeon clutter and wiring and LEDs etc. it’s all just time at this point.

Also working on the sign that is going to go over the central Archway in that first picture, above: 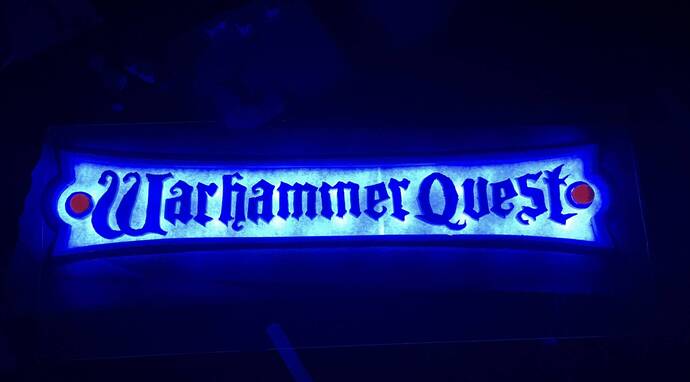