Being a compilation thread of all Warhammer Fantasy Chaos Dwarf Songs. Those written and illustrated by others will have author and artist name marked out at the beginning. Be welcome to add your own if you like! You may of course post your own in a separate thread, and then add them here for the sake of completeness.

To be continued with many copied-over songs.

In their mystic rituals, in monotone labour and in the rearing of their children the Chaos Dwarfs of Zharr Naggrund, and all its domains, sing. Be they doomladen dirges, rattling recitations of religious script or just simple work verses, songs are part of Dawi Zharr culture just as they are for other races.

The nature of Chaos Dwarf songs reflects their cruel nature and experiences in life. These are not songs about innocent joy, and very rarely about romantic love or homesickness. Instead they bear the grim worldview of the songs’ composers and everyday singers.

These songs have very often a moral aim which would appear twisted if not sickening to many other peoples in the Warhammer world, as is the case with all lore of Chaos Dwarf folk culture. These are stanzas of death and slavery, of exploitation and heinous ritual. They record in the public memory of Chaos Dwarfs the dramatic high points in their long history filled with strife, suffering and ruthless drive for dominance and power.

Often these songs are partially or wholly undecipherable to outside listeners, even if they were to understand the Dawi Zharr language. So embedded are Chaos Dwarf life and thinking in mysticism that most cultural expressions through song would be difficult to interpret at best should any translator and scholar wish to do so.

Instead it is usually through the formative world of Chaos Dwarf childhood that their culture’s values and expectations can be uncoded via stories and songs.

Chaos Dwarf children, just like most other children in the Warhammer world, live like “little adults” to quickly mature and get prepared for their often predestined adult life. Many of the songs and stories which surround the youngest are complicated adult works shared by all in family or clan gatherings. This is fundamentally no different from other races’ way of life.

Even so, there exists a flaura of Chaos Dwarf children songs, who are relatively simple and generally taught to the youngest by their mothers. These are rhyme songs which, if translated, can be understood well by outside observers, since they should be intelligible to Dawi Zharr children in relatively early development.

Some parts of Chaos Dwarf children songs may be advanced enough to be lost on Human children’s ears. This is because both western Dwarfs and eastern Chaos Dwarfs are intelligent races with lives of longevity and slow maturing periods. As such, many Dwarf beardlings possess more knowledge and skill in the crafts than most Human elders.

Even small Dwarf children are often able to grasp concepts which would be complicated for young Human adults. Chaos Dwarfs are no different in this regard from their distant kin. The contrast with Dwarf verses lies instead in the songs’ content.

One have to understand that Chaos Dwarf songs at an early age helps instill a moral sense where greed, domination, contempt for others and complete submission to hierarchy all vie with each other and combine to create the merciless character of the Chaos Dwarf people and their monstrous empire.

These are songs of bloodshed and hardship, of carnage and conquest, of failure and damnation. They are glimpses into the psyche of these enigmatic slavers and engineers. And they are not for those weak of guts and heart.

These are the songs of the Blacksmiths of Chaos.

Greenskin speech and language are crude, as are their legends and music. Their songs are usually as much an affair of screaming, grimaces, spitting, motions, stomping and violence as they are words, rythm and accompanying music. This is especially true for Orcs, whose stanzas around the campfires are not much different from their warcries. The short, thuggish songs of Orcs reflects their brute and thick nature, whilst Goblin songs are full of spite and malice, just as Goblins themselves are.

Both Orc and Goblin songs are simple and boastful, though Goblins and their Gnoblar cousins might boast mostly of cunning and torture whereas Orcs prefer to laud fell deeds of raw strength. Hobgoblin songs are, on the other hand, often longer, more coherent and more advanced than the verses of other Greenskins.

Hobgoblins are arguably the most intelligent of the Greenskin races, as is evident in their clothing, saddles, tools, armour and weaponry, all of which are more carefully crafted than the works of Orcs, Goblins, Gnoblars and Snotlings. In Hobgoblins, relatively high intelligence corresponds directly with an extremely murderous, cunning and treacherous nature. This is to be expected from Greenskins, for whom brutality and selfishness is at the core of their essence.

To some extent, the souls of Hobgoblins may be gleaned from their songs (if they had souls). More sophisticated than their Orc and Goblin counterparts, these songs are part of an oral tradition in which the Dark Lands Hobgoblins’ origins on the Eastern Steppes has not been forgotten, akin to the steppe title Khan which is still very much in use.

These songs are also a reflection of the Hobgoblins’ precarious middleman position as the elite slave cast of the Chaos Dwarf empire. They are the taskmasters and slave soldiers for whom service to the Dawi Zharr was a better option than wild free-for-all Greenskin freedom in the Dark Lands.

This was a devil’s bargain, for once struck it may never be broken if the Hobgoblins are to survive in the Dark Lands. So hated have they become amongst the other Greenskins for their acts of treachery and servitude to Zharr-Naggrund that if the Chaos Dwarfs were to fall, or if the Hobgoblins were to strike out on their own, they would be hunted down and slaughtered en masse by vengeful Orcs and Goblins. Hobgoblins are already killed on sight by their free Greenskin cousins.

Thus it is that the Hobgoblins of the Dark Lands thrive under the Dawi Zharr’s dominion, ever fearful of their ruthless masters and the hateful Greenskin hordes that roam these harsh landscapes. They are expendable cannon fodder, subject to the cruel whims of their overlords, and repeatedly suffer cullings of Khans and even tribes who become too powerful for their own good. Their songs are verbal witnesses of this reality in which they live as the detested henchmen of the Chaos Dwarfs.

Yet above all they are stanzas of paranoia and malice, of plotting and cunning, of treachery and assassination, of bloodshed and pillaging. They are just like the Hobgoblins themselves: Cruel, murderous and insidous to the core.

These are the songs of the Slaves to Damnation.

Written by: @Admiral
Illustrated by: @forgefire 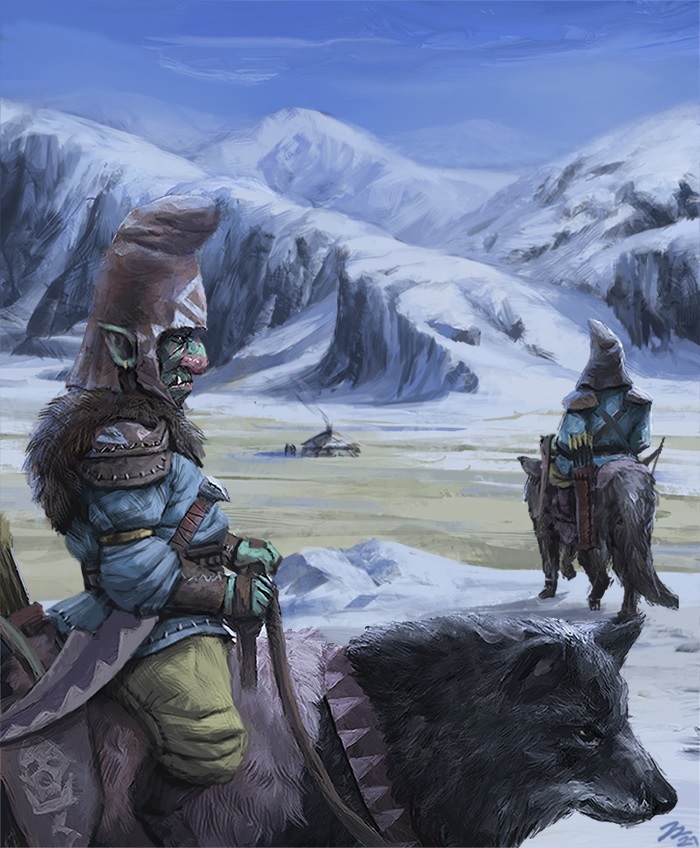 We’ll get past da big-big wall,
burn every damn hall! 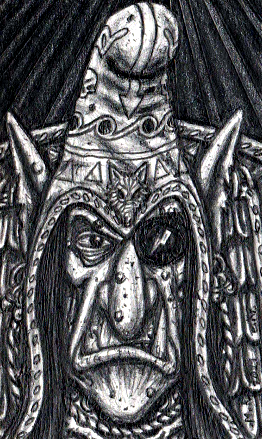 Kill on da hill,
an’ gore on da shore!
Won’t miss any store,
zo loot while ya kan!

Leg in da keg,
an’ arm from da farm!
Won’t hear any harm,
zo maim while ya kan!

Written by: @Admiral
Illustrated by: @denelian5 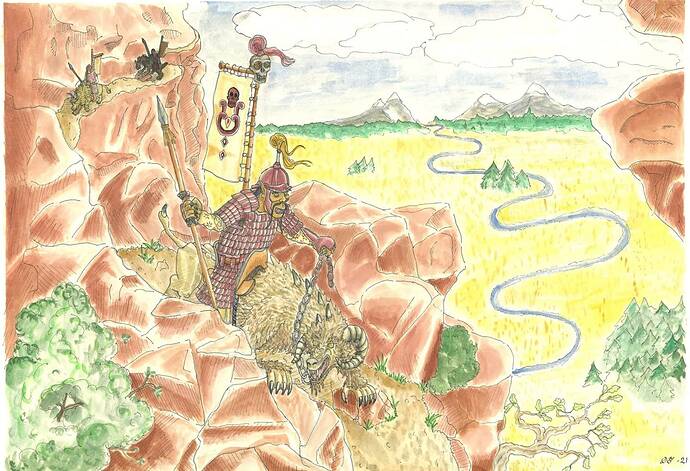 Nick a spade an’ dig a pit,
give dat pit a pointy stick,
shove an orc into da pit,
an’ then dere’s seven more.

Nick a chucka wiv a spear,
stick da orcses dat appear,
at barbeque you eat da ear,
an’ then dere is five more.

Nick a pole an’ dig a hole,
bait wiv ratses and ol’ sole,
zee boar throw orc on da pole,
an’ then dere is four more.

Nick a blade an’ hide in loo,
when da orc make numbah two,
get dat blade an’ drive 'im through,
an’ then dere is three more.

Nick his choppa in da night,
orc get smashy, start a fight,
stick 'im in 'is back alright,
an’ then dere’s two more.

Nick a spear an’ wolfy dog,
'unt orc right down inna bog,
stick 'im kornered like a hog,
an’ then dere’s one more.