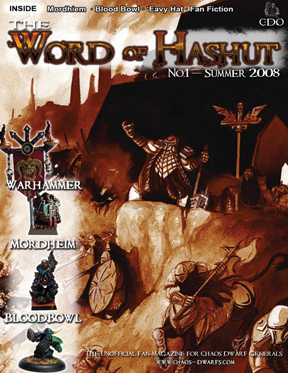 Below you’ll find the start of what is hopefully CDO’s quarterly webzine that will be packed with great articles, great conversions, stories and the like. This is our first stab at this and we welcome any constructive criticism. Tell us how we can make it better for the community as a whole.

I would like to draw special attention to those that helped to made it happen: Abyss, Sojourn, Lord Archaon; Thommy H; Torn, Baggronor (awesome cover dude!), Xander, Cianty and the guys at Border Town Burning.

Be advised the file is nearly 12 MB, that is large for a PDF. We kept it at a high resolution so that if you wanted to print it out in full color it will look good for your printer.

Get inspired and take heed of my remarks in the editorial. Future issues are only going to be as good as the quality of the content, so make your submissions great ones. I’d love to have the problem of each issue worrying about what to put into because I have so many choices. So as of now we will start excepting articles for the next issue, send them to me and I’ll take it from there. But before that take a break, read this one and enjoy.

In closing enjoy it, if there are things you want to see for the next issue (slated for September) please send me a link. If there are any mistakes (we’re bound to have missed a few, let us know so we can update it).

For those with lower speed internet connections you can access a low res (its around 4.1 megs) version here (caution it will look terrible if you print it from this file)

And a third way is now available for viewing: http://issuu.com/wordofhashut/docs/woh01

Let me know if there are any issue with downloading.

Outstanding!!! All of you.

A few things,  I don’t understand why the story sections have been broken up so much?  Makes it hard to follow.

Any photos of how to convert/ sculpt should be done before undercoating.  Abyss’s article although good is hard to see the detail on the photos.  Would there be a way to embed hyperlinked images so that what you see is only thumbnails?

If there is anything you want me to do just ask.  My commitments are easing up a little at the moment, so I can do some stuff for the next one for certain.

Baggronor’s front cover is really nice. The general guy has a look of ‘the world is within my grasp!’

This is phantastic. Congrats to all who worked on this first issue! I’ll spread the word about this in the other forums and among my friends. :hat off

well i let it run for 5 min. my computer has a hard time dealing with mac stuff.

Very good guys, about time we had pamphlets to convert the unbelievers. But i second Grimstonefire, the story should not be so fragmented (very nice stories, congrats to the writers.)

The front cover is very nice, i especially like the blunderbusses firing from behind their shields.

Well done to all the contributors, hopefully one day i can join your ranks.

Well I let it run for 5 min. my computer has a hard time dealing with mac stuff.

Mac shouldn't matter. Are you using Firefox? For some reason Firefox is not working with this. However if you use, Safari, IE, Camino, Flock, Opera, etc it works just fine on the download. Which is weird because I use FF on my PCs, Macs or linux distros.

In case anyone asks, the reason its not in the site is because I can't upload attachments to the site, no matter the file type, no matter the platform or size of the file :( which is truly bizarre

A few things,  I don't understand why the story sections have been broken up so much?  Makes it hard to follow.

Heh, you must never read magazines then ;) This happens because not all articles fit nice and neatly into sections due to varying length. Due to the content make up of this webzine, the articles shifted an INSANE amount of times and at some point we had to finalize it, but a point of consideration for next time.

Good stuff, but I agree with Grimstonefire that the way some of the content is ordered is a little baffling. On the final page, there’s stuff continued from page 3! It might be better to just put everything in order and just leave some white space here and there - legibility and ease of browsing should probably be the number one priority, rather than filling every gap.

Oh, and I didn’t know you were putting the Astragoth rules I did in there - thanks!

Well, my laptop isn’t working along right now so I’ll download and print it at work tomorrow! From the reactions above it must be a good read! :cheers:

the sneek gits wip are so cool

On the final page, there's stuff continued from page 3! It might be better to just put everything in order and just leave some white space here and there - legibility and ease of browsing should probably be the number one priority, rather than filling every gap.

White space is my favorite, but the concern was growing about the page count.. again. The first issue was supposed to be 8 pages...

Oh, and I didn't know you were putting the Astragoth rules I did in there - thanks!

Well, one of the advantages of using the internet rather than print is that page count isn’t a huge concern - it can be as long as it needs to be. I know you obviously wanted a hard limit for how long the webzine would be (because otherwise it’d just go on forever…) but I think you should have overcome it with, say, font size, rather than chopping everything up and piecing it together like a puzzle.

As I say, the content is great, but it’s really hard to enjoy it all!

Great Job Everyone! This is great. And if anyone has read an issue of Rolling Stone or GQ lately, it moves around the magazine more than this one does!

I liked the Astrogoth stuff, and Eavy Hat is classic. It was cool to get the Black Dwarf stuff in there, especially with the Golden Hat ending last night. And I’ll have to give the sneaky gits a try…

All in all, a great job, and I am sure you guys learned some things to make it even better next time. I can hardly wait, and appreciate all of the hard work you guys put in. Hope to join you as a contributor soon!

Well, it certainly turned out well

Some good articles in there, and decent fiction too. I especially like Astragoth :hat off

Managed to download it and was positively surprised! :hat off

All in all great work to all who contributed. Hope to do so as well in a future issue. Got plans enough I tell ya!

Loved the stories, but I’m off to convert some sneaky gits now…hahaha

Wow, what a great webzine! You did an awesome job for sure!

The cover is simply stunning and gets one in the mood right from the beginning. Exceptionally done!

The layouting is quite plain and simple mostly which is pretty fine with me because you don’t have unnecessary images loading each time you turn the page. I don’t find the scattered texts that annoying… they sort of tie the entire issue together.

The photos of the models really bring this magazine to life. Good move keeping them in high quality.

The page count is definately not too much. It is dictated by the content which is top quality. Let’s cross our fingers that there will be enough submissions so that it will stay that way for future issues. Considering the brilliant posts on this board and the turnout of the competitions alone I am not worrying about this at all, though!

However I have to complain a little: The chaos column on page 11 is partly covering the Chaos armour rules… the image should be behind the text obviously. And it’s “Border Town Burning” not “Bordertown Burning” as under writers in the credits section, but, seriously, who cares…

An overall awesome webzine. Great production. You can tell the contributors love their hobby.

Thanks a lot for the hard work!

NB: You should defiantely put a note below the download link and inform people about the incompatibility with Firefox (which is astounding, by the way). How about providing this link instead (should work for anyone):

I have only quickly scanned it and it looks awesome! The front cover is amazing. You could of asked me to finish off the mage and i would of gladly done so. If you would like an updated pic then let me know.

I put him up in the Rules section ages ago, along with a few others. Maybe Willmark can be persuaded to put my versions of Zhatan and Gorduz in future issues?
Clam 29 June 2008 06:14 #20

- and that front cover is a truely masterpiece for sure - Mr. Baggronor. Great, great work :hat off