Warlords of Erehwon by Rick Priestley

image1000×409 148 KB
I have seen some lovely write ups of various fantasy games which your chaos dwarf miniatures can be used in. Since the dawning of the age of Sigmar, the once very united community have been separated into various camps be they AOS, 8th ed, 9th age, or KOW. The one of coolest things about CDO is that we embrace and celebrate one another’s hobby and do not fall into the infighting and bickering that other areas of fandom have about “the best system”, “the best edition” or “the best way to play”.

Anyway, with that preamble out of the way, I am here to introduce you all to my current favourite fantasy battle system - a system which has been fully embraced by my gaming group and has replaced all others. I can’t make subjective statements like this the “best system” or the “best way to play” - but what I can say, hand on heart, is that this system is the most fun I have ever had mass battle fantasy wargaming.

Warlords of Erehwon is created by Rick Priestley (yes that Rick Priestly who designed a little known game called warhammer 40,000 and countless other systems)

Warlords of Erehwon is a fantasy based game designed for 28mm tabletop warfare. The gameplay is built around the D10 system developed for the science-fiction game Beyond the Gates of Antares and also using the praised order dice mechanic first used in the Bolt Action WW2 rules.

Warlords does not use an i go, you go system. Instead it used an alternating action mechanic. A mechanic that I am now so used to, I go you go feels somewhat clunky by comparison! This means that there is no waiting around in your enemy’s turn and that many of the tactical decisions are dependent on what unit activates and when. You cannot rest in this game, the landscape of the battlefield shifting during each turn and your decisions having to react to this. 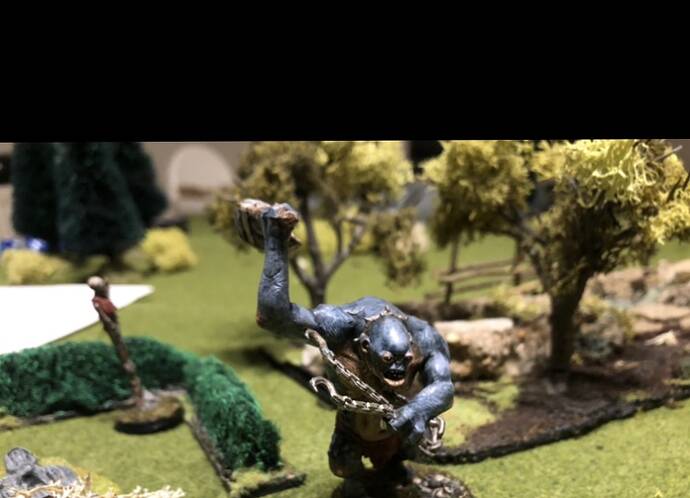 The game utilises a d10 system with a 1 tending to be an instant pass and a 10(or 0) being an instant fail. Unit stats are values which one must equal or score lower than in order to pass a check. Therefore there is no need for tables of any kind.

A d10 system also allows for subtle differences in units that d6 systems cannot do. The difference between a 5+ and a 4+ is massive. Each score higher represents nearly 17 percent increase or reduction in difficulty. On a d10 system this represents 10%. It also allows stats to be read as a simple percentage on face value. 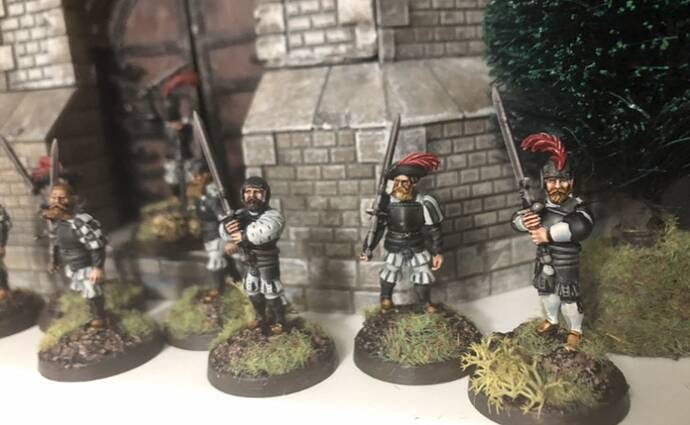 The rulebook is a self contained game with rules, scenarios and army lists for dwarfs, humans, elves, gnolls, goblins, orcs, undead, knights, halflings, ancient Greeks,barbarians and a whole section dedicated to monsters. 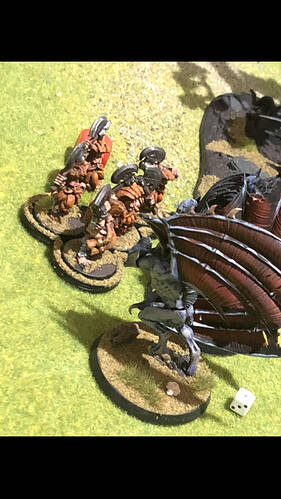 New army lists on Ricks website are released for free intermittently. (Www.thisgaminglife.uk) he has, at the time of writing, added lizardmen, snakemen, romans, ratmen, pig faces orcs and samurai. More are added all of the time.

A chaos dwarf army can be easily made using the dwarf, orc and goblin lists however he has also released a points calculator for creating your own army lists. A friend of mine has used this to make a chaos dwarf army list fully point calculated and game legal. Linked here: Warlords of Erehwon - Chaos Dwarf fan army book 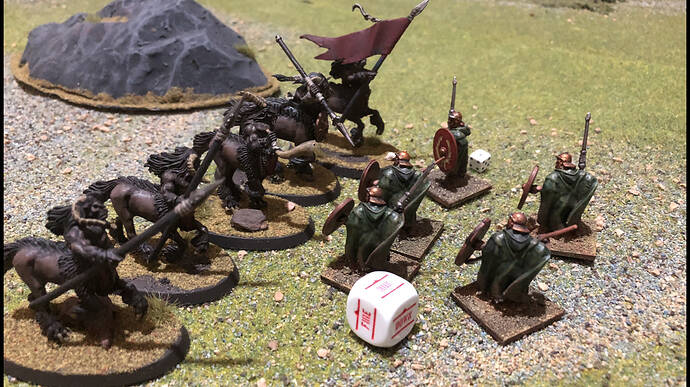 image1334×750 567 KB
(Imperial Roman Auxillia prepare to fight back a unit of savage centaurs)
The game is miniature agnostic and designed for creating armies limited only by ones own imagination. You can can mix and match lists or create your own. If you wish to play as Romans riding dragons or a halfling and snake man alliance you absolutely can.

The scale of the game is individually based 28mm. The system is designed for warband level gaming (smaller that army but larger than skirmish) although my group has found that the game scales really well for very large epic battles. 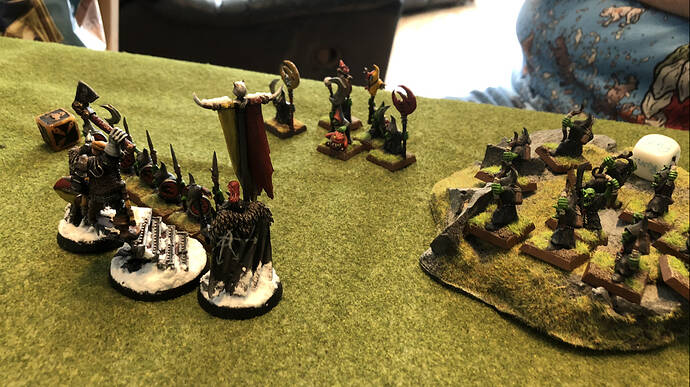 image1334×750 517 KB
(Chaos warriors are ineffectually peppered by goblin arrows)
Basing is very relaxed. Circles, squares or hexes are all cool. Base size just needs to be “sensible” in order for the game to flow nicely. I’ve had many games where 32mm bases minis have fought 20mm based models and it has had no negative effect.

At this time there is no official campaign supplement, however I have written a narrative focused one of my own. (It took months!) This uses the old mighty empire tiles and plenty of d100 tables for random nonsense to occur. Here is a link to my supplement:

In the appendix of this document is also a set of rules for playing siege battles created by a friend and of mine.

Warlords of Erehwon is not a competitive tournament game. It is the ultimate beer and pretzels, dust of your old collection and tell a fun story game. My gaming group, being narratively focused, have embraced it fully.

Within days of a new AOS release there is now a rush on to adapt the warscrolls into a Statline using the calculator to get whatever beast or warrior has caught our eye onto the battlefield.

If you wish to have more detail or information about this system, send me a message and I can send over my numerous resources and homebrew rules for this game.

It makes me happy to see all these models from different ranges together.

Oh, once I have enough 15mm Chaos Dwarfs on individual bases Ill have to try this out!

This actually sounds really fun and easy to learn. Alas my game group (consisting of me and 2 friends) is not really looking for new games.

To anyone whoever read this review and thought the game sounded interesting- the rulebook is currently half price!

Warlords of Erehwon is a fantasy based game designed for 28mm tabletop warfare. The gameplay is built around the D10 system developed for the science-fiction game Beyond the Gates of Antares and also using the praised order dice mechanic first used...

For those interested a mate of mine is compiling three years worth of fan rules, lists, spells, scenarios and random event tables created mostly by him and partly by myself into a large free fan expansion to this game. 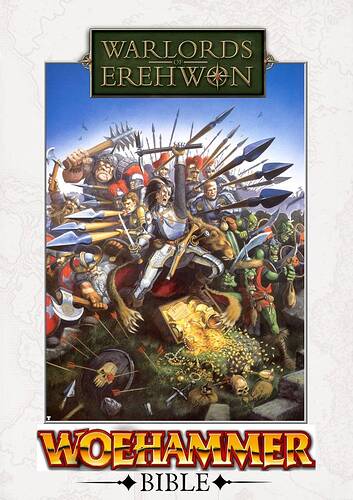 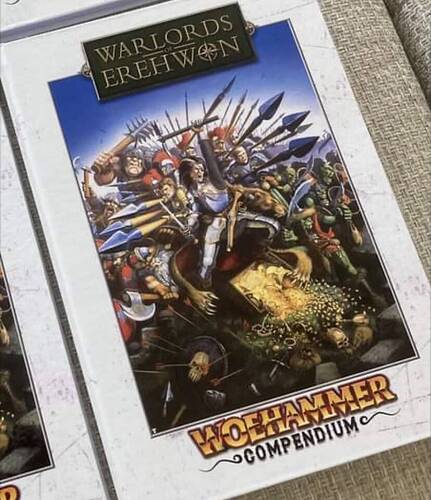 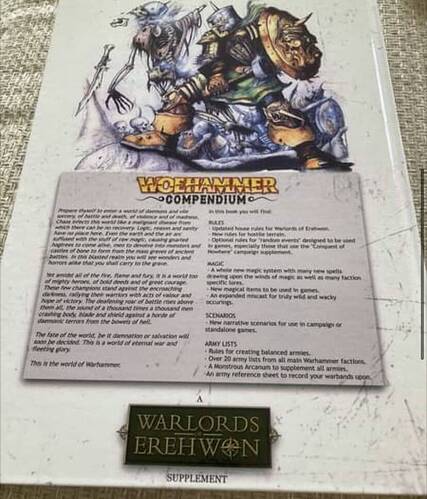 Great will take a look. Think I am going to play this game at local club next week

I saw the chaos dwarf list as well. Is it balanced well with main armies ?

Yeah it’s all done using point calculators out out by the author himself. We’ve found it all to be very balanced and we’ve played every army in that book between us now

@Oxymandias I have now played a few games using the CD army list u posted ( not the one in the wohammer large book based on the 8th ed chaos dwarf army book, but the other Chaos dwarf list)
How did u find building a list/ army. What did u use as the core of army? I have found it’s difficult without many bow/ range attack to get pips on enemy ( or are taking couple small units of wolf riders/ wizard). CD are also quite elite so maybe just having 1 bigger hammer unit helps?, Rather than couple of smaller 5 warrior units.

Monsters seem good to include, perhaps with mounted general.
I appreciate it’s a fun puck up game but still thoughts on unit composition would be interesting to hear.

Glad you’ve been playing this! It’s a fun little system isn’t it.

What did u use as the core of army? I have found it’s difficult without many bow/ range attack to get pips on enemy ( or are taking couple small units of wolf riders/ wizard).

The ranged infantry don’t benefit really from the bigger unit. Shooting is rarely about killing in this game. It’s about dishing out pins. Get them ducking and shitting their pants because arrows are flying.

The game is much more brutal in close combat and it’s how the game is won. But remember- enemy units with pins may fail charge orders - win. And also close combat victory is decided by how many pins each unit has total. Not by how many they sustained in that combat.

If you can put a pin or two on a unit before you charge them, your odds of beating them in combat goes up dramatically.

So to reiterate. I take units of infantry in tens to go around and fight and I support them with units of 5 ranged infantry to pepper the enemy with pins , thus improving my chances of beating them in combat.

So I’d take those warriors in bigger blocks and have the gunners in smaller blocks nearby to back them up.

Monsters seem good to include, perhaps with mounted general.

Monstrosities are amazing but so dicey. They have damage tables not wounds and often res over ten. But remember a 0 always fails. If a skink blows a dart at a dragon, and it fails it’s res on a 0 and then rolls a 9 or a 0 on the table - it’s been killed !

Monstrosities can be impossible to kill as well though! Some days you just can’t break that armour and they eat half your army haha.

I think to use monstrosities, both parties should agree to it and both use them. Makes for a fairer game.

My Romans have no such thing, so we really struggled to deal with the nexrosphynx in the tomb king army last time I played. (Which has got me imagining WHAT a Roman monstrosity could be…)

I have now played a few games using the CD army list u posted ( not the one in the wohammer large book based on the 8th ed chaos dwarf army book, but the other Chaos dwarf list)

The lists are almost identical. Just some minor tweaks and updates to match our new hero house rules.

(Which has got me imagining WHAT a Roman monstrosity could be…)

Thanks. yes sounds good tactics. I suppose the chaos dwarf list doesn’t really have bows appart from on the hobgiblin riders .I suppose I could just give the standard hobos bows…don’t think would be too OP or out of character of the army.

Not sure on artillery. Very hit and miss, although I guess that’s standard in lots of wargames…

Yeah my group went through a cannon spam phase but ig didn’t last long haha. As you say - too unreliable