So here is my pile of shame, or “potential” as the sensitive pointy eared players call hit.

My motivation to paint is mainly tied to playing the game with the models. I also get distracted and jump into other systems… frequently. So there is a real mix of stuff in here that I will organise by game system.

I’m going to do updates every month with what I have got done, this fits with my regular workflow where I tend collect up a bunch of models and then varnish them all in a batch.

I’m also likely sell some models to reduce my overall deficit, if I know I’m not going to paint something and swap it out for something I will.

My current project, 3/4 of the way through the Targaryen starter set. Looking forward to playing a game with my own models after have a demo game.

High risk of adding more model into this pile, because you know, dragons…! Also probably have get Unsullied to make a dragon list work. 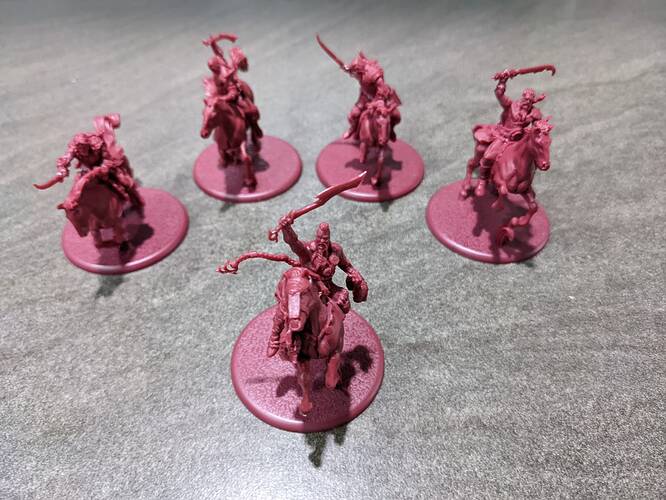 Got into this during lockdown 2020, really enjoyed the solo play and co-op has some legs too. Troll Trader had a 50% sale on the models, so picked up the Chapter Two card pack and the Dwemer & Frost Spiders for new NPC challenges and some alternate builds for the Draugr in Chapter One. 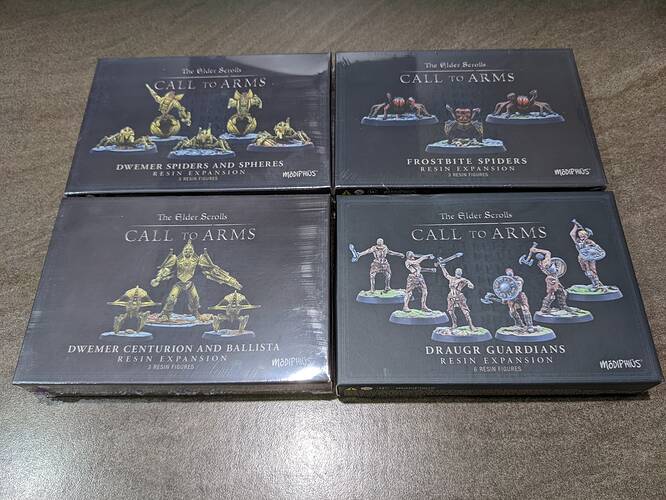 Was lucky enough to win this a charity raffle at my local FLGS. I originally talked myself out of buying this because of the number of models, so slightly overwhelmed by the 60 it comes with. Want to get onto this quite quickly now as GW have announced they will release the planned add-ons should be a good one in 2022. Could be a serve as starter for Soulblight Graveyards AoS and Warcry too. 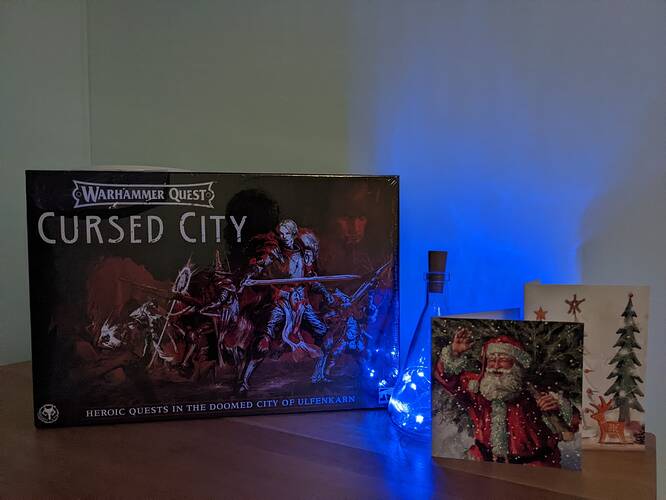 I play both systems and like, this is largely a list of left over models. The Kruleboyz are the exception, where I want to run a Hobgrot warband in Warcry.

The Flesh Eater Courts are remains from the AoS army I’m currently running, not a lot of motivation to paint these. They really need a new book, AoS 3 updates were not kind.

The Slaves to Darkness models similarly left overs from Warcry for I haven’t got around too.

Shar’Tor is the last of may Legion of Azgorh army. I have never got around to painting him, I find large models a bit intimidating, being bad in game means I haven’t pulled the trigger. Little drummer boy might be destined for a conversion some day… 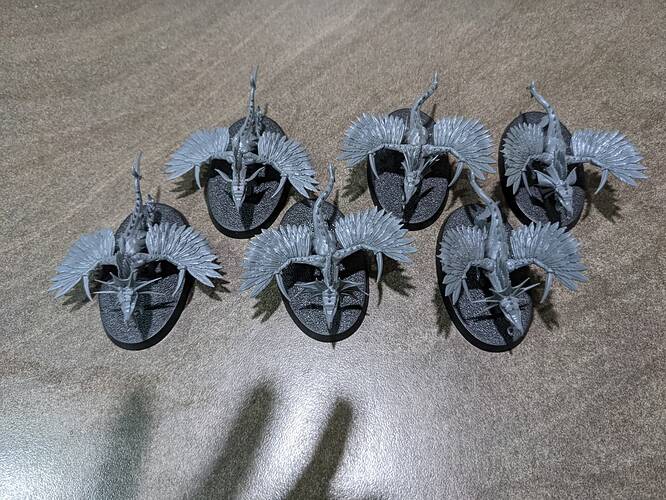 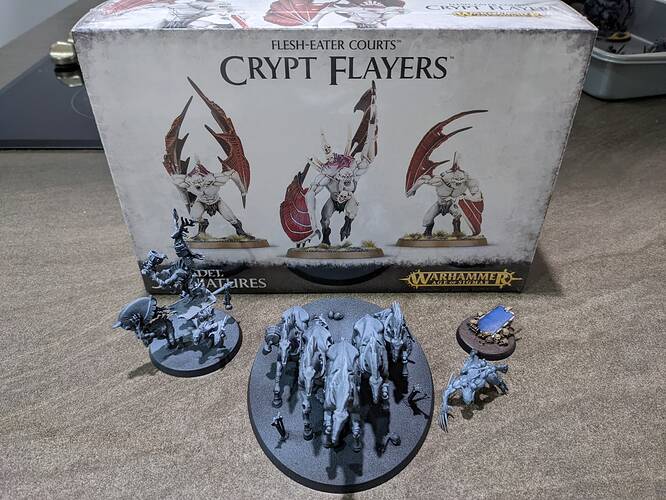 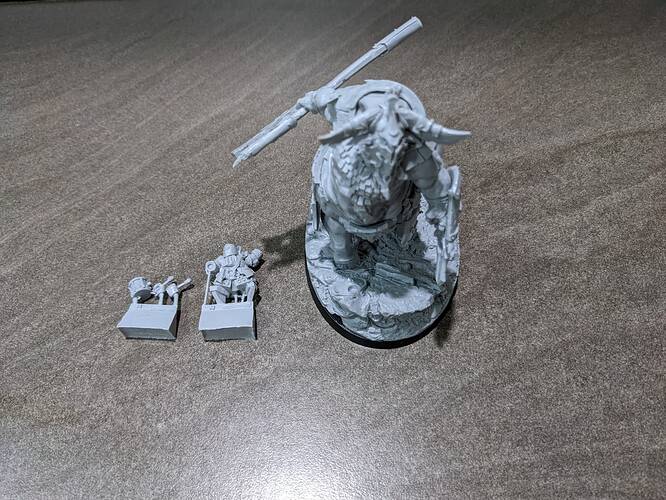 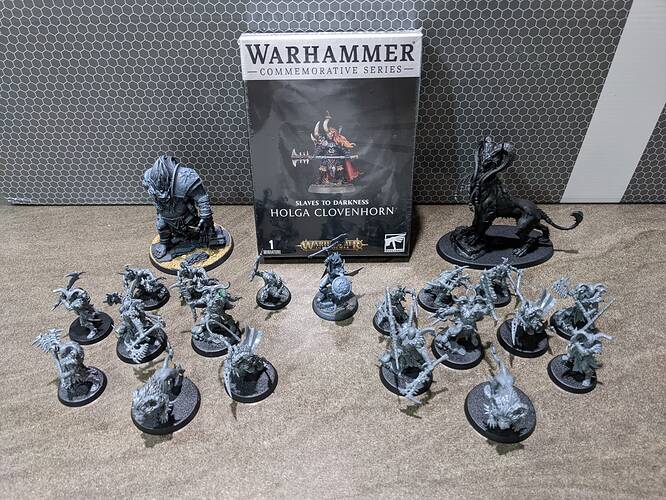 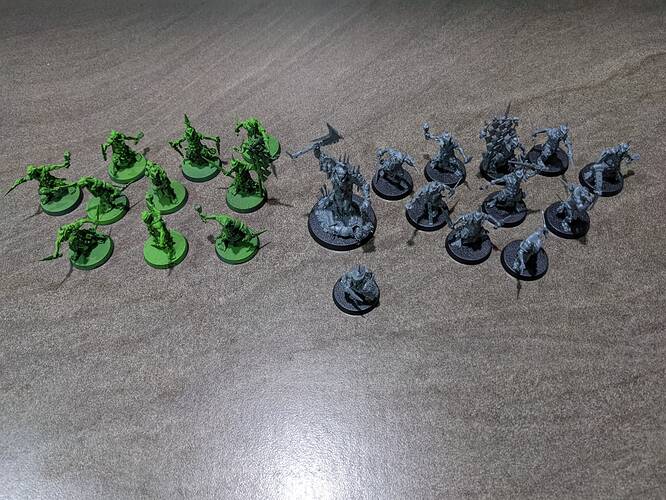 Despite having never played HH I one of my largest armies is Raven Guard, it was a 40K army, but with the advent of Primaris marines I pivoted into a 30K army. These are again left overs, not a lot motivation to paint them, although the rumours of a new version in 2022 may change that. That said Raven Guard are super easy to paint and get done. 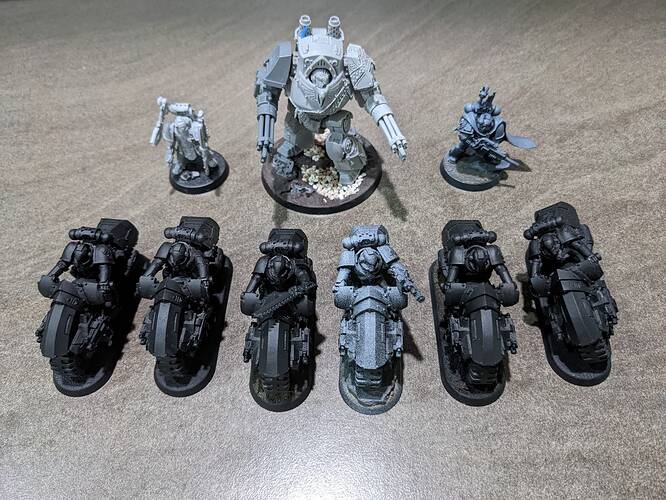 This is mainly just a random mess of mainly Space Marines that I mainly can’t be passed off into HH. I think most of these I’ll probably chuck on ebay and reduce the pile. There are a few favourites I’ll hang onto, but no plans to really play any 40k or Kill Team so unlikely to get around to them. 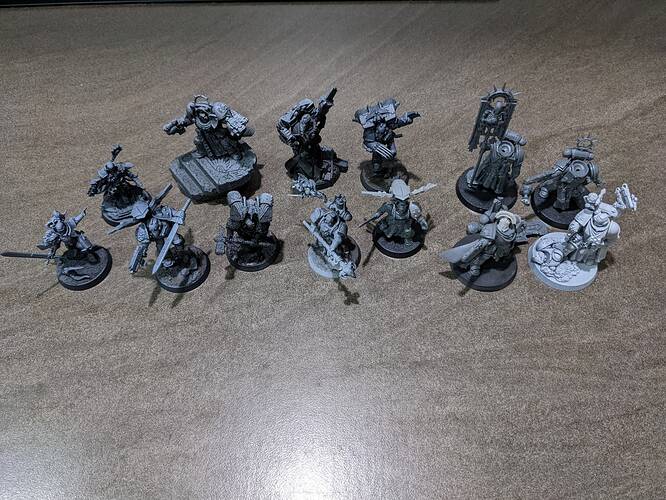 Haven’t played this in years now. Using the old school Citadel Hobgoblins and have a few of the Frostgrave NPC monsters. Same story more left overs never got around to painting. Again would be quick to crank out, as they’re very basic models. 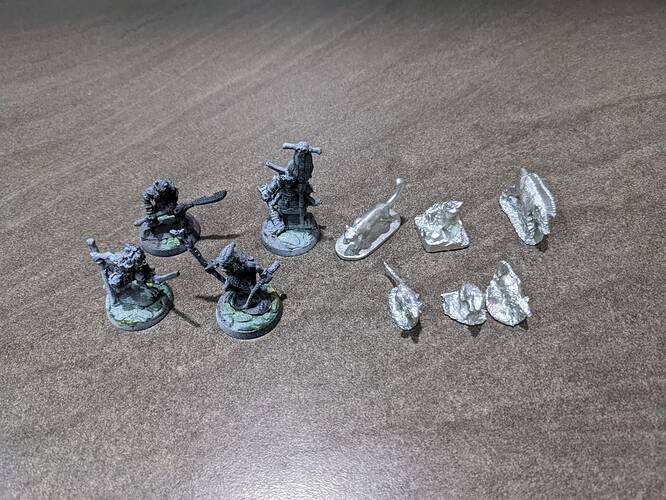 Last and as far as this community is concerned not least. The biggest and shamiest pile is my Chaos Dwarf army. I have had nearly all of this the 90s, I use to play unpainted, so its at least been on the table. Unfortunately its just an intimidating mass to the tackle and not something that likely to see play this year. Bit of rough count, as in reality some of the painted models might get stripped if I were to tackle it. 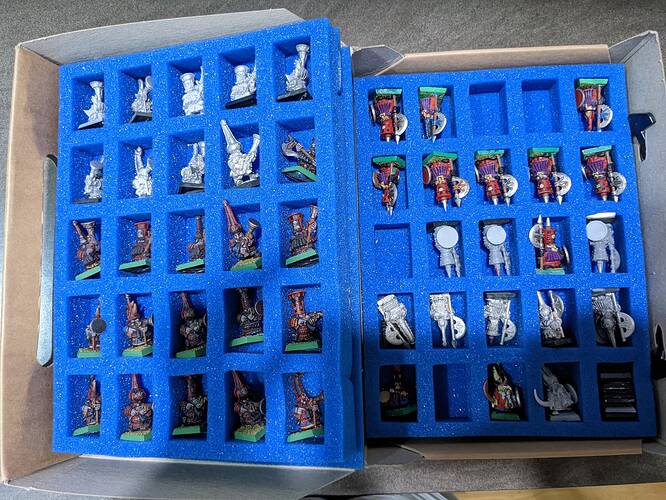 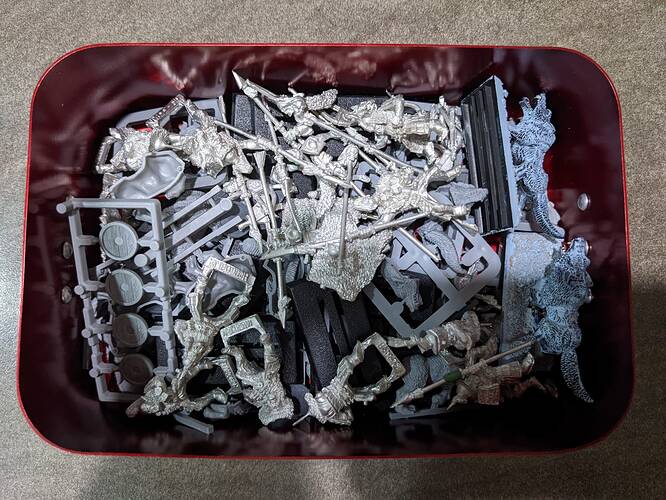 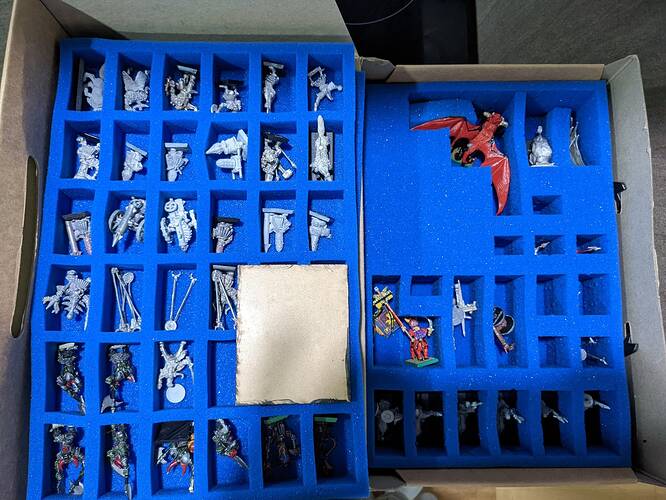 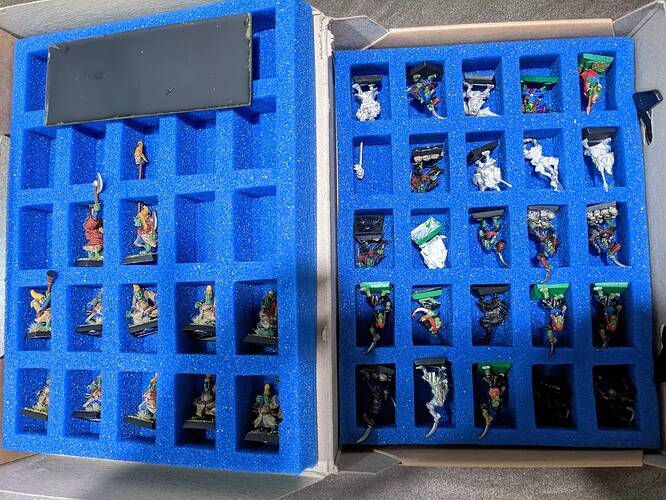 Uhhhh nice, a veritable smorgasbord of units and games

Those Chaos Dwarfs are of course the juiciest part. But I understand all to well that they are also the most intimidating ones…

Have fun with it! Looking forward to following your progress here

You know you can start tour score at 0 right?
You start with 0, every new item gets added to that score, every painted (or sold, withing reason) gets subtracted from the score.

Ok, I changed the score to zero and will count down.

Wow, you’ve kept quite detailed records of your holdings.

I don’t even want to think about what I have hidden/stored in the catacombs.

I figured if I got it all out, it might stir me into action!

and did it work?

Whaaaaa??
There’s Skyrim miniatures?
I totally didn’t know that…so happy that you posted that, a nice surprise and I’m off to buy some Draugr and Dwemer!

Death to the stormcloaks!
For the Empire!

Oh, and quite the envious variety of miniatures you have!

…aaand now we have to take photos of our grey pile for all to see…? But seriously, nice thread organization and a great set of models to work on. Here’s hoping it keeps you motivated!

Bessron: To a degree especially just finishing off some of those odds a sods to say it’s done. Ticked of a few of the Dothraki first though as want to get them on the table.

Fuggit: Yep they’re really nice as well, good detail on the resin, hard plastic is not the best, but thats only a few sets. Sadly I think they’re as pricey as GW!

Jackswift: Up to you I think, might be cathartic!

Bessron: To a degree especially just finishing off some of those odds a sods to say it’s done. Ticked of a few of the Dothraki first though as want to get them on the table.

good to hear, maybe i should…

So January has finished, and I will bask in it’s glory as it will probably be one of more successful months I feel.

First I finished up the last of my Dothraki for my ASOIAF army, pretty pleased with this as its probably the fastest I have put together a full army for something. (About three months) 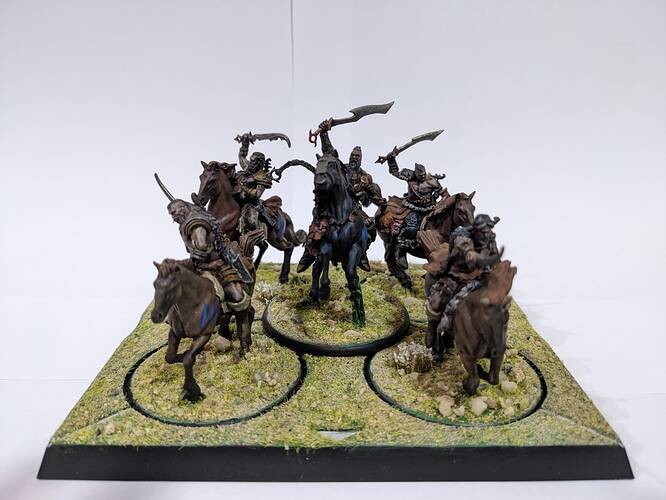 Next up on the paint table were some Kruel Boyz to make up a Hobgrot heavy warband for Warcry. Got a 4 player campaign lined up for early March so they are ready to go. 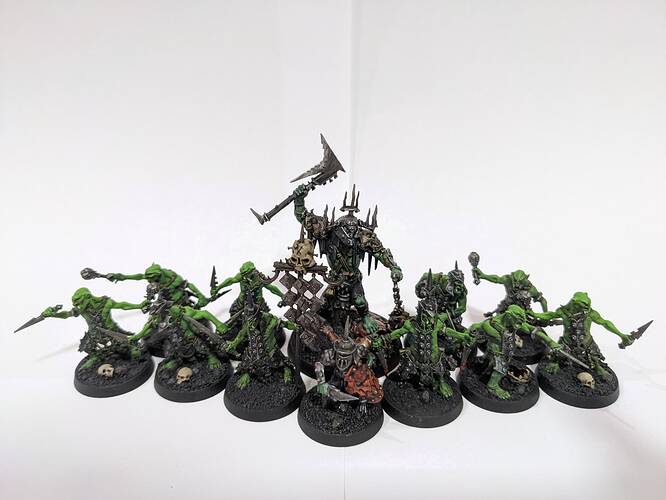 Lastly, is a new entry. Yes I got seduced by the temptress that is ebay into picking up a couple of Legion of Azgorh models I didn’t have. Tried to get them both done, but timed out on the Daemonsmith for January. The Deathshrieker has already been slaying the other fire dwarfs on the table. 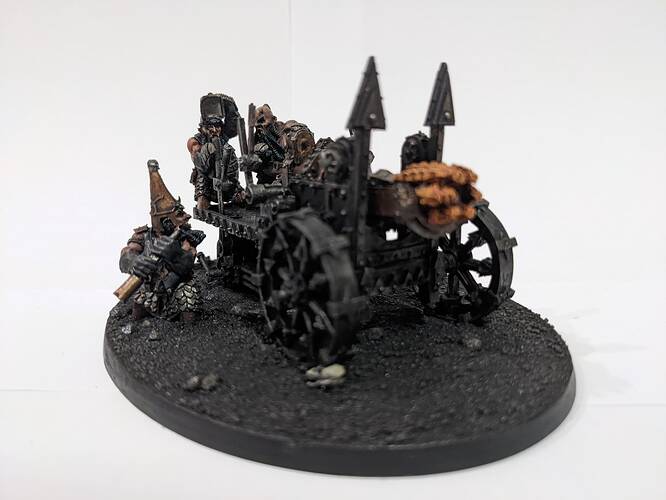 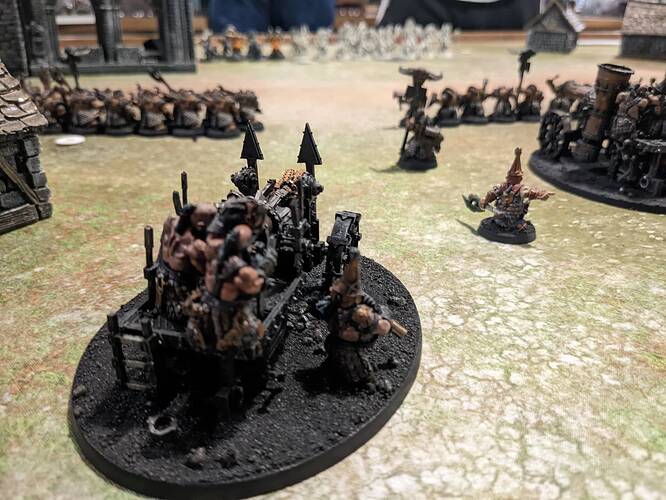 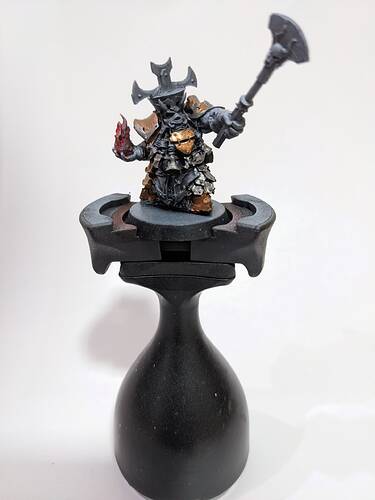 All in all a good month, finished an army, new warband and even more Chorfs.

Glorious! You did good, showing those other dwarfs the sharp end of the stick.

February updated. So I knew it was bound to be less productive than January, but perhaps not this bad.

Only two models ticked off and one of them was started in January. The other is is going into the golden hat so will be secret for now. 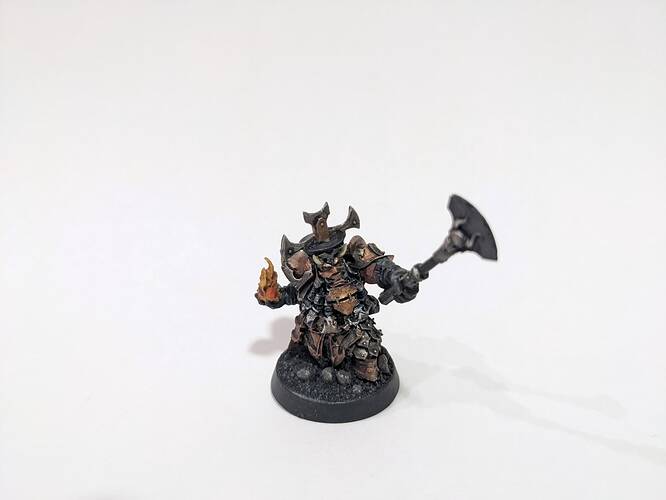 Think it’s a wrap for this month, out of time for models as spending most of my time out of town.

Finished the murder turkeys, which were the last things hanging around from the Warcry set a couple of years back. Will throw them on the table in 1K Slaves to Darkness list on tomorrow.

Then got the last of my Draugr for Skyrim done. Thinks that is 18 now for some savage solo play for the dragon born!

I only added one model this month which was the Chaos Dwarf Painter, which was a random prize from the Golden Hat. So can’t feel bad about that one! 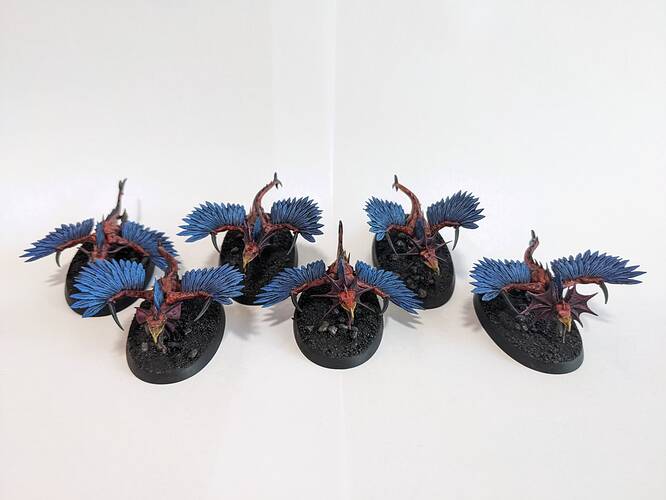 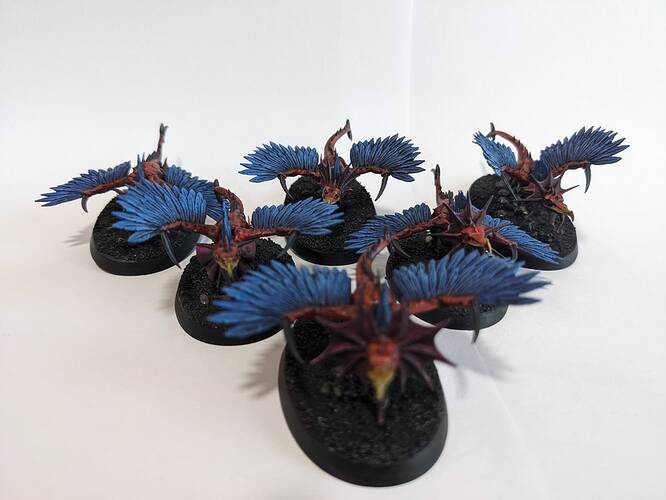 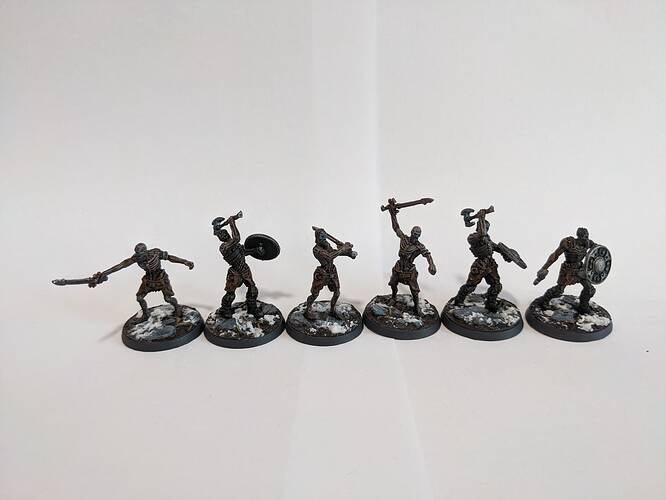 Edit: And the missing entry from last month:

That’s a glorious Shar’tor Smiddy, I like the colour on the skin very much

Thanks, yea I was pleased with how it came out. Usually a bit intimidated, by big models.

Airbrush really helped with the skin.

Another month done already! Was pretty fruitful though with 20 models knocked off. My best month so far! The Untamed Beasts are pretty easy to get done with the help of some contrast. Then a couple of additional solo models ticked off. This leaves only two models left in my 1K Slaves to Darkness AoS / Warcry menagerie now. 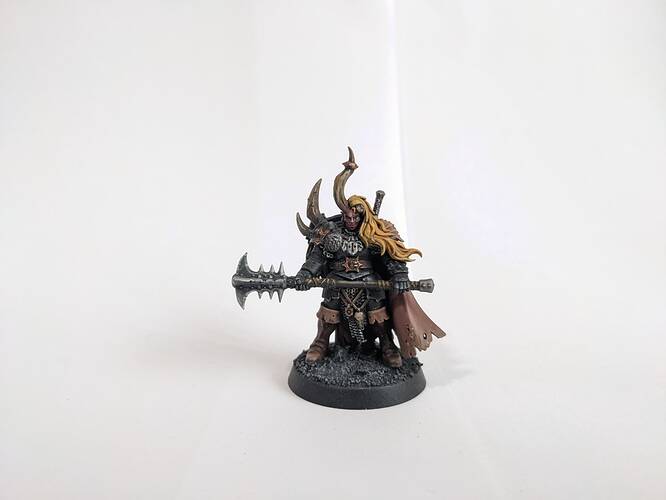 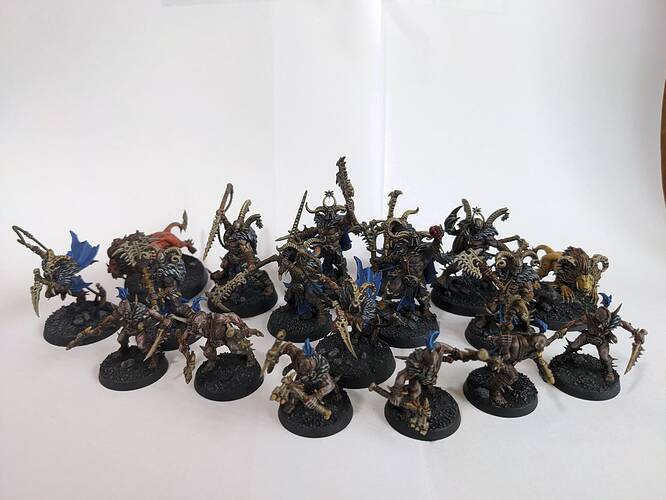 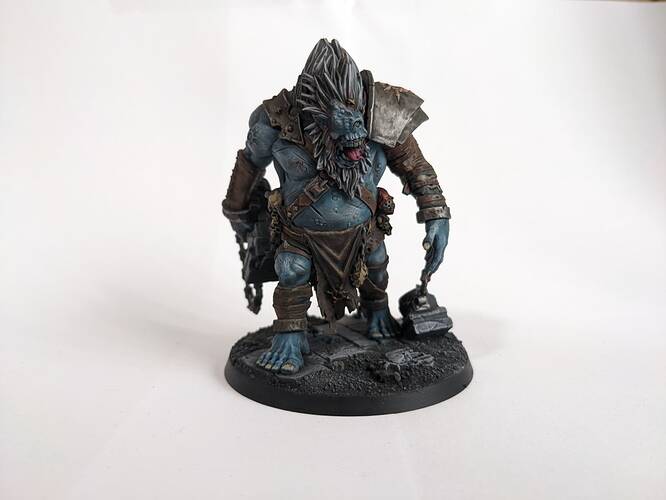 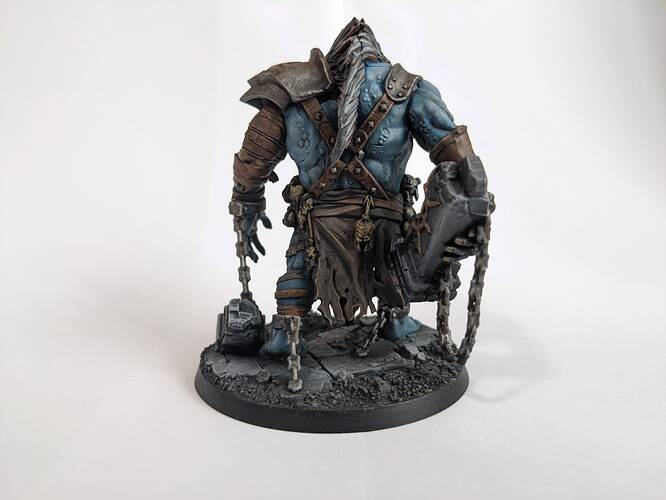 As soon as the paint is dried the Untamed Beasts were out fighting the Unmade, they lost but thats the way for new models! 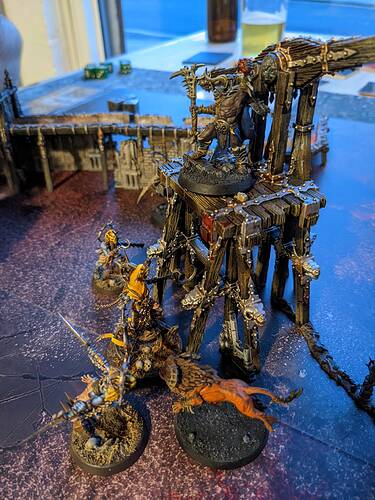 These are all such great minis right, lovely effort mate what a great month up 20