This is a topic spawned from the discord where we were talking about a meetup.

@Jasko suggested a meetup early 2022 somewhere around Germany/The Netherlands/Belgium/… (well i added Germany, Belgium and … , since it depends on who wants to join the fun).

There would be battles, beer and pretzels… or whatever is more applicable for the location.

So the date seems to be the weekend of the 9th of April 2022. Not a definite date but it seems to work for most.

The location would be anywhere between Jasko and myself, or maybe a bit more to the north of the Netherlands depending on participants. That’s Cologne Germany and Maasmechelen Belgium.

The venue would ideally have at least 2 rooms (gaming and sleeping), have a kitchen and sufficient toilets, maybe allow for bbq outside. I have found some suited venues that are around 200 euros a night.

It would be so awesome!

We would need a location and time. I guess we’re looking for at least a two-day weekend here, we also need some place to get in two hours of sleep in shifts while the tournament is going on

Hey guys. Love this. I’d be tied to school holidays for times I can do this. It wouldn’t be mega cheap but would be something I’d be up for doing. The Netherlands is a quick hop for me. My local airport flies regular flights to Amsterdam.

In the interests of making it something I can afford it would have to be a meet up near an airport, like a city or town that has one. That way I’d only be forking out for flight and place go stay

The member location map is interesting to find potential candidates

Ill leave them alone for now, if there aren’t a lot of responses in a week or two ill tagg them

A weekend sounds even better. We could rent a venue, potentially in a hotel where we also rent rooms. OR we go WAY back like we are young beardlings and rent a venue where we’ll also spend the night in sleeping bags…

Well, even if it isn’t near Amsterdam, I could surely pick you up at the airport.

I thought about that as well. Can’t deny the great nostalgia this would invoke

There might be another way: Camping. Of course this would then better be done in spring, but then we can get some tents and maybe even do this as Gardenhammer. Maybe we can do it where you have your trailer, Michael, use it as our headquarters? Just last week I got my portable 6x4 foldable gaming table I will test out on Friday, I’d be happy to bring it. Currently I also have a second one with a sizeable dent in it so they send me another one and told me to keep (well, they said “dispose of”) the other one, so that’s basically two foldable full-size gaming tables.

Also, Eindhoven would work too, maybe even Maastricht-Aachen Airport (its a VERY small airport but its 15 minutes from where I live, but not all flights go there).

I mean of course, if anyone thinks about flying in, I’m sure we can make airport pickups happen, I mean we’re driving to the place anyway.

Camping. Of course this would then better be done in spring, but then we can get some tents and maybe even do this as Gardenhammer

We could do this. maybe a small venue with some grass near it.

Maybe we can do it where you have your trailer, Michael, use it as our headquarters?

this could potentially work too, but it could be a little bit crowded for gaming purposes but they do have a decent camp site. and id be happy to provide food… 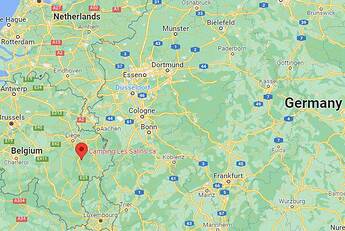 This is where its at… not exactly middle ground but… it is an option.

but it could be a little bit crowded for gaming purposes but they do have a decent camp site.

Oh sure, I guess any type of camping-based Gardenhammer would have to be done outside anyway. But maybe having some fixed structure as a base is better than showing up at a regular campsite

Anyway, was just a thought, but lots of possibilities here. Guess it also depends on how many people we would actually be in the end. But I’d say a two-day event would be just right, especially with people flying in

Ooof, some nice BBQ in the evening, beers and beards around a fire, doesn’t get much more chaos dwarfy than that

Well… there could be pillaging and summoning of daemon ass…

(End of July and august all free)

However please don’t be a slave to my availability. We need to go with the majority here. Could do a poll once a few places and times have been suggested ?

If we go camping Easter holiday might be a bit cold. If we can find a venue with maybe a separate room for sleeping it might be a lot nicer.

Something like a community hall or something. I mean… if there are 2 rooms we can do the camping in the building too…

True, I guess I was think more regular Dwarf here

However please don’t be a slave to my availability. We need to go with the majority here. Could do a poll once a few places and times have been suggested ?

I did a quick check for some local scouting venues. They rent their buildings during school holidays for 100 to 200 euros a night for groups up to 50 users.

It has everything you’d need.

Not sure how prices fluctuate between countries though.
Belgian Easter holiday would be between 2 and 17th of april 2022